I’m Gonna be in a Rock Band!

Yes!!! It’s true, True, TRUE!  I’m going on tour with a rock band!!!!  And not JUST ANY rock band, but with one of the world’s most amazing, incredible, virtuosic guitarists ever — Steve Vai!

Here’s a picture of us talking backstage when I met him in Boston last year:

Rehearsals start in less than a month – and I, with my CAMAC 32-string electric chrome MEGA-HARP  – will get to tour with him this fall all over the US & Europe as a member of the band!

OK … so …. how am I feeling about all this?? Trust me, I’ll be talking a lot about it in the coming weeks.  But in a nutshell:  I’m excited, scared, daunted, thrilled and I want to ROCK!!!!

And what I REALLY want to do … is bring you all along on this adventure – by blogging and sharing everything I’m learning and doing.

OK …what I REAAAALLLY want to do is to blog AND collaborate with a women’s magazine, and write about this as an ’embedded’ journalist — because this is SOOOOOOO incredibly cool. 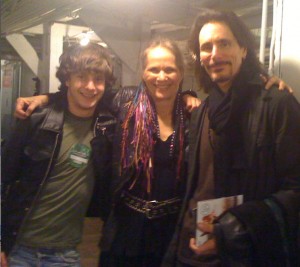 It’s SO, SO, SOOOO freakin’ cool, that my teenage stepson is JEALOUS of ….. ME!!  (That may be one of the best parts so far!  See stepson in photo at left)

Aaahh!!!  I dream of standing up during my solo moment and saying:  “OK, all you girls out there — GIRLS OF EVERY AGE and GENDER — this is for YOU!  See this instrument??  It’s a HARP!  This harp means that YOU can rock your life with whatever you got!” —  and then ROCKING OUT on my harp.  Yes, yes … I know … this isn’t my show — it’s Steve Vai’s show (and I’ll tell you way more about him and his incredible approach to music in the coming months), but … look … I want to make it YOUR show.

I want you to get to experience this amazing adventure with me.  Because if you told me 30 years ago that practicing my freakin’ harp with a metronome for hours on end would eventually take me around the world, get me a record contract, a Grammy Nomination, lead to my own symphonic TV special, get an instrument named after me and land me in a rock band with one of the world’s greatest living guitarists,  I would have given you the name of a good psychiatric social worker (and trust me, I had one.)

So I want to share this with YOU in every way I can.  Because….