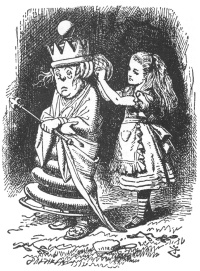 ‘I can’t believe that!’ said Alice.

‘Can’t you?’ the Queen said in a pitying tone. ‘Try again: draw a long breath, and shut your eyes.’

Alice laughed. ‘There’s no use trying,’ she said ‘one can’t believe impossible things.’

‘I daresay you haven’t had much practice,’ said the Queen. ‘When I was your age, I always did it for half-an-hour a day. Why, sometimes I’ve believed as many as six impossible things before breakfast…’

Yesterday I met with Maeve Gilchrist who I consider to be one of the world’s most talented harp “leverers,” along with being a wonderful composer, singer and harpist.  I asked her if she would look over the Steve Vai charts I’m learning for next week’s rehearsals, and help me strategize the modulations — and as I was making a list that morning of what pieces we’d look at together I found myself writing this note to myself:

“Building the Church”:  both first and 2nd fast sections – have her look at the video – is this even humanly possible on the harp?  If not .. what would I have to do to MAKE it possible?“

I remember when I was about 7, hearing about someone who was ‘attempting an impossible feat,’ and thinking:

“What is an impossible foot?!?”

But once I got that worked out, thinking:

“And why would anybody try to do the ‘impossible’?  If you know it’s not possible, why waste your time?  Why not just do something else?”

Over the years I began to understand that when people say, “impossible,” they mean  “nobody’s done it yet, that we know of, and we can’t figure out how anyone possibly could.”

So when I run into something that seems impossible on my instrument, I have a different take on it now.  Sometimes I take it as a challenge to create a “physical poetic translation” – something that has the ‘effect’ of the impossible thing, but isn’t a literal translation.

And occasionally, I remember that someone has a particular skill and I can go straight to them for first-hand insight — assuming they’re open to sharing.

I’m currently working on the charts for rehearsals with Steve Vai next week. Since none of this music has been played on harp, when I run into a snag, I never know if it’s because of a personal limitation, i.e. something I could eventually train myself to do — or whether it’s simply not possible to make a literal translation to the harp, and  I’ll have to reinvent it in order to play it.

I generally like to start from the premise of literal translation.

So when I started running into snags in my physical ability on a couple of the very virtuosic Vai tunes, I immediately remembered being blown away by Maeve’s technique at a festival in Europe.  When I discovered that she currently lives less than 5 miles from me, I asked if she could help.

Here’s a tiny video from my session yesterday with Maeve (we would have gotten more but the camera died after a spate of convulsions).  What I love about the video we got is that, within 15 seconds of watching Maeve simply playing in her natural style, she’d shown me a radically different, but very simple way of speeding up the way I lever.

It may or may not help make “Building the Church” possible on lever harp, but in 15 seconds she completely changed the way I’ll shift levers from now on, which opens up a new vista of what is possible for me on my instrument in general.

Which is why it’s good to try at least one impossible thing a day.

You can learn more about Maeve and her music at her website here.