How I Met Steve Vai

Since people keep asking me – here’s how I met Steve Vai and ended up joining his band for this Fall’s tour. 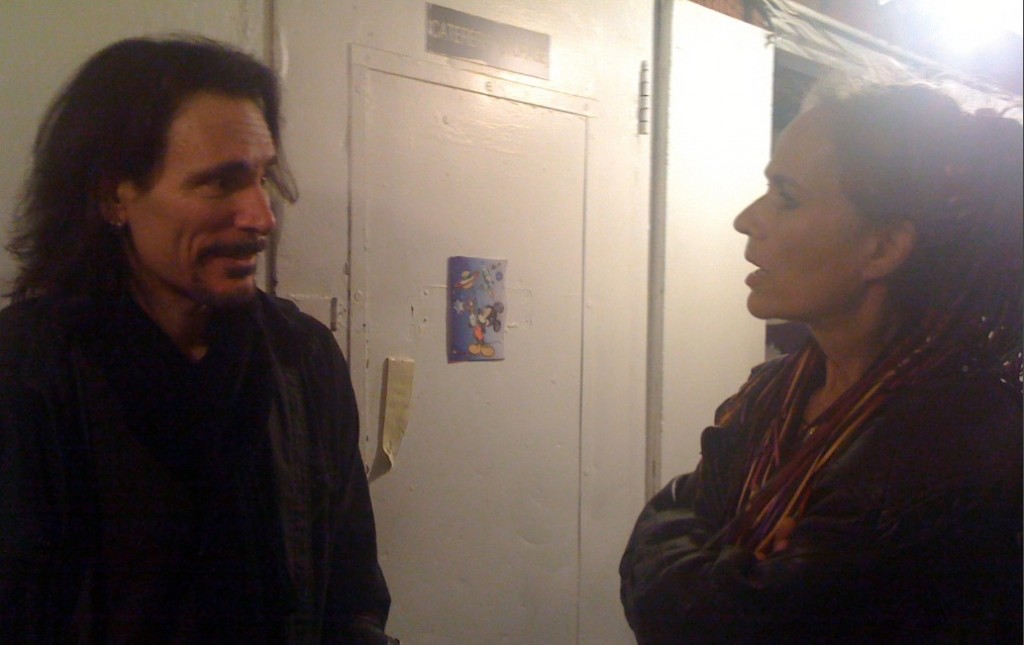 Backstage with Steve Vai at Boston's "Orpheum Theater," the night we met

If you don’t know me, I play electric harp – in fact, I’ve worked with the French harp-builders CAMAC for the last 15 years to develop the world’s first truly commercially-viable electric harp, a 32-string, 11-pound carbon-fibre instrument that I’m honored to say was named after me, the “DHC Light.”   I’ve always believed the harp has an important voice for rock music — and I’ve explored that voice, using distortion and altered harp techniques, in my one-woman shows and in the music I write for harp solo and orchestra.

In fact, I often think the electric harp is the missing link between the classical world and the rock world.

And of course I’ve always wanted to be in a rock band … with my harp.

About a year ago I got an email with the subject-header “STeve Vai here.” It showed up in my inbox along with a moving invitation from the heir to a Saudi fortune, and the exciting results of a lottery in which I’d won over a million dollars.

So I didn’t respond.  But I didn’t delete it, either.

About a week later I forwarded it to my husband, and asked if he thought it was a hoax.

He said, “Well, it might not be.  Steve Vai a very unusual and creative musician – he might really be writing to you.  You may as well write back.”

So I did, and the alleged …

Wait.  Maybe I should explain that I typically assume things aren’t what they seem to be.  It’s fundamental to how I see the world, adds a lot of comedy, and it’s the basis for everything I do that’s described as ‘innovative.’  It just seems to be how I’m wired.  I generally have the sense that, for example, cats are just pretending to be cats, and so on. Until about 3 years ago, whenever I saw someone in public ‘talking on a cell phone’ I was pretty sure there was nobody on the other end of the line.  It’s not that I’m distrustful … OK, maybe I am … but seeing the world that way just seems more fun.  Except when it seems sinister.  Sometimes both.

So it’s not that I distrusted Steve Vai, personally, in any way – I just assumed it wasn’t him on the other end of the emails. But I didn’t mind corresponding.  So the person-possibly-impersonating-Steve-Vai and I exchanged a few emails, and eventually he (or she) invited me and my family to come to the show when Steve was in Boston touring with the Hendrix experience last year.

Even as I walked up to the “Will-Call” window to pick up the comp tickets, I was pretty sure someone would jump out and laugh at me, “Ha ha ha ha!  You really thought Steve Vai was writing to you!! Ha ha ha! Just how gullible are you!?!?” ??

But was Steve Vai.  He is a deeply creative and unusual musician.  We do share a musical ethic, on many levels.  So we stayed in touch, talked about me touring with him when his new album came out.  And after a few stops and starts, that’s what’s happening.

Which suddenly makes me wonder … should I go back and respond to that Saudi heir??

??The Story from the Other Side

A week ago, I finally heard Steve’s side of the story, which is a lot more straightforward:   Steve’s wife is a harpist, and he was surfing the web trying to find harp strings for her when he stumbled onto some of my YouTube videos, was intrigued with what I was doing and emailed me.  (Remind me to write a blog sometime tracing some of the most important points in my career to husbands-of-harpists)??

So stay tuned for tour details.  And what the heck, join my email list, follow me on Twitter and Facebook.  This is going to be one wild ride, and I’ll be blogging and posting as much of it as I can.

Links in this blog: