How to Prepare for the Unknown

This Sunday at 7AM I take off from Boston’s Logan airport and land in L.A. where even though I have no idea if how I’m preparing actually will prepare me.

In fact, I’m sure it won’t, but for me, rehearsal preparation means getting my head around the structure of each piece, creating a ‘map’ for it and working out a strategy for how to navigate each one on harp.

If that sounds like preparing for a Lewis-and-Clark-type expedition, that’s how it feels.  I’m going into the unknown.  My unknown.

Thus my need of a musical Sacajawea, a guide, a rock-guitar sherpa, someone who knows the territory and can lead me through it.  And for maps, and experts in the finer details of paddling unknown waters.

One commitment I made to myself, when I started this Vai project, is to chronicle it — yes, like Lewis-and-Clark chronicled their adventures into uncharted territory.  Because this is my own wonderful wilderness.  And ever since I read about Lewis-and-Clark when I was 8, I wanted to chronicle my own adventure.

So this blog is about …

Preparing for the Unknown

There’s no way to be completely prepared for something that’s so different from what I know. If I knew how to prepare I’d probably also be prepared —  but I have a general idea what I personally need in order to feel prepared going into any new musical experience, and for me that means making my own visual representation of the music.  Literally drawing my own picture of it, my own map.

It also means trying to find as many experts as I can to help me.

You Got Class, Babe!

So a few months ago when I knew it was likely I’d be touring with Steve, I signed up for a class at Berklee Music Online called “Steve Vai Guitar Techniques.”

Oh, that there were such a class for everything new in my life!

This class has been incredible in bringing me into the mind of the man whose music will fill my life and my fingers for the next 6 months, and in developing some of the techniques I’ll be using.  You can see some of what I learned in this short video I made of some of my homework. 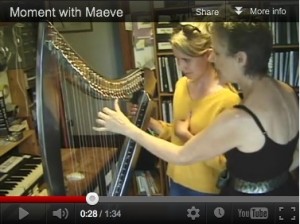 Since I can’t refer to previous recordings or performances of this music by other harpists, I’m often unclear as to whether  I just need hours of practice in order to perfect something, or whether it’s humanly impossible – since I’ll approach each of those scenarios differently.

When I’m lucky, I can connect with an expert, someone with particular skill navigating a specific problem, and that happened last week, when I discovered that one of the world’s greatest lever-harpists, Maeve Gilchrist, is currently living five miles from my house.

Within three seconds – literally – watching Maeve play in my studio changed my approach to harp -levering-technique and instantly sped up my playing.  You can read about that and see those very 3 seconds, and her discussion of how her playing differs from other harpists in this blog-with-a-video. 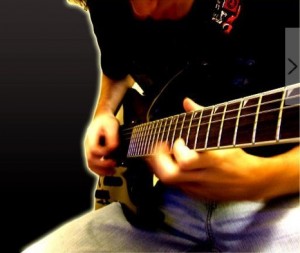 Lewis and Clark would have been lost without Sakajewea.  Travellers to Everest search for the greatest sherpas to accompany them.  And I have Andrew Pevny.

Andrew is a guitar student at Berklee Music who was introduced to me by Scotty Johnson, my teacher in the “Steve Vai Guitar Techniques” class, and without whom, I’d still be paddling around in the headwaters of the great Vai Rock-Guitar Tributary.

Andrew’s spent the last two weeks helping me create musical maps and discussing some of the performance details only a guitarist would understand, so that I can try to translate them to harp.  Tomorrow I’ll meet him in person for the first time, when he comes to Boston to work with me in a series of “mock rehearsals.”

I’ll be blogging more about how Andrew and work together to prepare me, what we’ve learned and what my maps look like.

When in Doubt… Run for the Hills!!!

When I get overloaded or my brain’s fragmented, I default to just preparing myself physically, by running and classical harp exercises. So if you’ve seen me puffing my way up the hills in greater Arlington — that’s just me preparing to join a rock band.