Where the heck are we???

Two things stick with me from Mark Twain’s “Diary of Adam and Eve”:  that God created death to cure Adam’s existential depression and that Eve’s job was to name the animals. 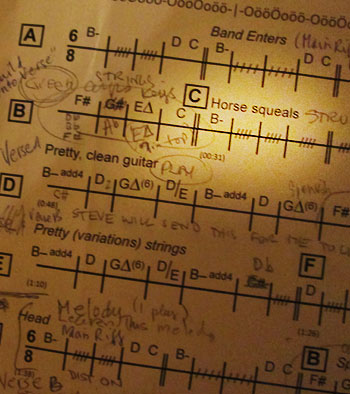 Naming the Animals in Vai's Music

One of the biggest challenges in my rehearsals with Steve Vai is not knowing the names of the animals – the sections of the music.

That’s important in rehearsal where you’re stopping and starting at different places in the piece.

But in the first week of rehearsals with Steve Vai’s band,  the names of the sections seemed  completely fluid.  As if every animal were just called “it.”

Initially I thought I just didn’t know the section names.  Then I started thinking maybe there weren’t any, not in a codified way.

Try to figure out what road you’re on in the Boston area and you’ll get an idea what I’m talking about.  It’s just assumed you’ll know where you are, even if you’re not sure where you’re going.

Me, I’m a person who labels my clothing drawers because otherwise I can’t remember what goes where.  So in rehearsals, I’ve been in a constant state of Label Withdrawal.

Finally Phillip (bass player, Phillip Bynoe) said, “OK, look, just name them whatever you want, tell us the names and we’ll call them that.”  Thus was born the following sections in the Steve Vai “Story of Light” tour music:

Naming the sections in my Digital Performer files of Vai's music

Now that we’re solidly in week two of rehearsals, I’m starting to understand where we are in the music.   I’m still lost, but I know where I’m lost.  And as the pieces become more familiar, they’re morphing into Verse, Chorus, Solo — and I rewrite my charts that way.I feel smug – I admit it – when I know where we are, and I know it’s the ‘verse’ or the ‘solo’ … but what was once alarmingly Hitchcock is now … sigh … just the “Chorus.”   The music is just as exciting … but the charts aren’t as characterful.

And frankly I really miss the Horse Squeals.

Which reminds me of the map I once drew of Orvietto, Italy with my own points of reference like “Incomprehensible Graffiti”, the “Oasis of Jesus Statue” and “Where I Bought the Cat Food.”

Being lost is its own kind of beauty.