Here’s a preview of my new bio for the Steve Vai STORY OF LIGHT program book: 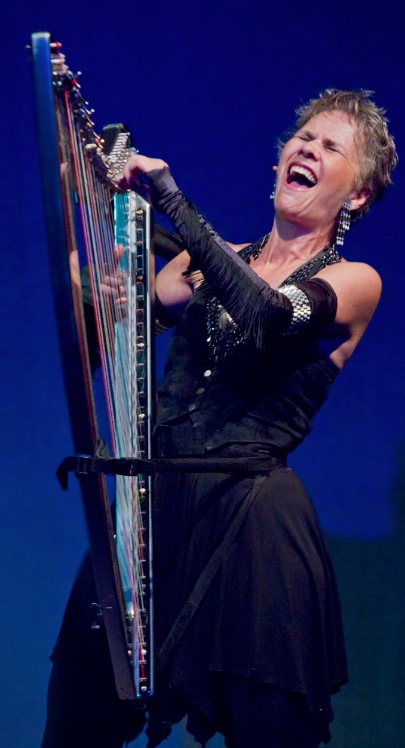 When Deborah Henson-Conant (aka ‘DHC’) slings her signature carbon fibre electric harp, she defies definition and shatters convention. She’s a multi-talented GRAMMY®-Nominated composer/performer who fuses classical discipline with Rock ‘n Roll showmanship, virtuosity and verve.  She plays an instrument as funky and rule-bending as she is herself, the 32-string hip-harp invented and named for her, the DHC Light.

Bending notes like a rock guitarist, scat-singing with the melodies, using a tuning key to slide her strings up to screaming distorted high notes  – then laying back into the lush, rich, sweeps of sound you can only get from a harp – she explores the extremes of the instrument. “Pushing the envelope … freeing herself and her instrument – that’s what Deborah Henson-Conant’s music is all about” according to NBC’s Today Show.

The Boston Globe calls her “a cross between Leonard Bernstein, Steven Tyler and Xena, Warrior Princess.”  The N.Y. Times credits her with “reshaping the Olympian harp into a jazz instrument by warping it closer to the Blues.”  Joan Rivers says, “She may look like an angel, but she plays devilishly well.” Grab a free MP3 of one her most requested tunes at HipHarp.com and follow her real-life adventures in Steve Vai’s band in her ‘Rock-Harp Diaries’ blog.

DHC has opened for Ray Charles, jammed on-stage and off-stage with Bobby McFerrin and Sharon Isbin, starred in her own music special on PBS, and released over a dozen solo albums.  She’s performed her original one-woman musicals at the Kennedy Center, Chicago Humanities Festival, Edinburgh Fringe and regional theaters including her shows What the Hell are you Doing in the Waiting Room for Heaven? and Honey, I Shrunk the Harp,  and her children’s story for symphony and actor The Frog Princess.  As a musical innovator she’s been featured at the Boston IDEAS conference, and guest-lectured at conservatories from Eastman School of Music to the Paris Conservatory with presentations like her Strings of Passion.

She’s won grants and fellowships as both composer and performer from Meet the Composer, NEA  and private commissions and grants for her symphony projects.  She’s premiered over 25 original concertos and suites with orchestras and chamber ensembles from the National Symphony Orchestra to the Boston Pops, including her multi-award-winning Stress Analysis of a Strapless Evening Gown and her classical-flamenco fusion Baroque Flamenco.

With the STORY OF LIGHT tour DHC realizes her long-time fantasy of joining a rock band — never dreaming it would come true with the legendary Steve Vai, who discovered her on … you guessed it … YOUTUBE.

The DHC LIGHT electric harp was developed for Deborah Henson-Conant by the world’s most cutting edge harp company, CAMAC Harps, in France, and is now played by harpists all over the world.  DHC designed the custom harness, which lets her sling the instrument on her hip (thus making it a ‘hip-harp’).  Each string has a piezo crystal pickup and an individual tuning lever that she uses to bend and retune strings as she plays.