It’s the eve of the last week of rehearsals before tour with Steve Vai.  I’ve spent the last six weeks working on the music in a kind of frenzied preparation,  rapids between islands of intense focus. 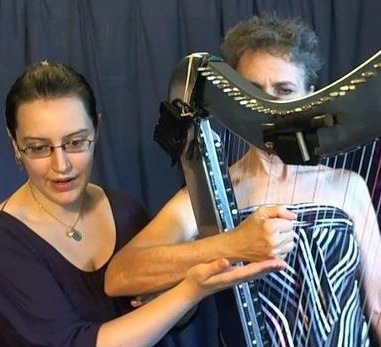 Marta & I during a coaching session

It’s all still so new, some of the techniques are so unfamiliar, the volume of music is so huge and — for me — the language of rock is still a foreign tongue to my hands.

Pushing my brain, my instrument, my hands — hours on technical drills like I haven’t done since I was first learning the harp.  Days on just figuring out how to play certain things – then more days trying to memorize them.

And each problem is maddeningly impossible until it resolves into something almost trivial.  So the reward for days of struggling with a problem is that it becomes effortless.

You’d think that would be a relief, but it then looks effortless. So you can’t show it to someone and say:  “Hey, look how hard this thing is that I figured out!”  Because by the time I can do that, it looks easy, and they say, “Yeah? So…?”

I know this is normal —  the dirt that gets thrown out of the gold pan is a huge pile compared to the tiny lumps of gold.  It must be the result of any refining process, that what you keep is the tiniest portion of what you’ve invested of yourself.

And as I sit here on this eve, I oscillate between being nervous that I won’t be able to confidently play the parts tomorrow — and excited about what I’ve discovered I can do with the music.

I keep thinking of one of my favorite books as a kid: “On Beyond Zebra!”

Oh, the places you’ll go and the things that you’ll see!
You never could spell if you stopped with the “Z”! 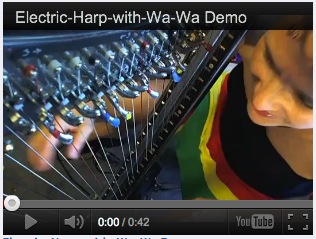 Exploring the Secret Hammond B3 soul of electric harp

I now I’m way beyond Z.  I’ve learned two kinds of double-lever slides, a lever-pluck-combo (I think my coach Marta and I may have invented that one), learned it’s possible to navigate chromatically on this instrument in ways beyond what I’ve done before; that with a wa-wa pedal, electric harp can sound eerily like a Hammond B3 organ.  Ways of moving, of playing, of thinking, of learning, of memorizing.

And I long for the moment when that tornado of learning, challenging and pushing reaches some kind of solidity, and I can stop and look back at what just happened and think – wow … so this is what it’s like on the other side of that.