A Hug from the Maestro

In Day 2 of the final week of rehearsals with Steve Vai for his upcoming “Story of Light” tour my goals for the day were:

GOAL #1:  To convince Steve to let me play “The Animal” on harp instead of keyboards using my new “Wa-Wa-Pedal-Plus-Harp = Hammond-B3-Organ-Only-Different Technique.”  See yesterday’s Rock Harp Diary entry for my first Wa-Wa-Harp triumph — but the thing is, with “The Animal” the wa-wa technique is a completely different … er … animal.  Because it evolves into this “Wacka-wacka-wacka” Jimi-Hendrix guitar thing and because – well, because it’s just unbelievably fun to play that piece!

GOAL #2: To get the chance to play the Ravel-esque version of Steve’s “Whispering a Prayer” that I worked out. 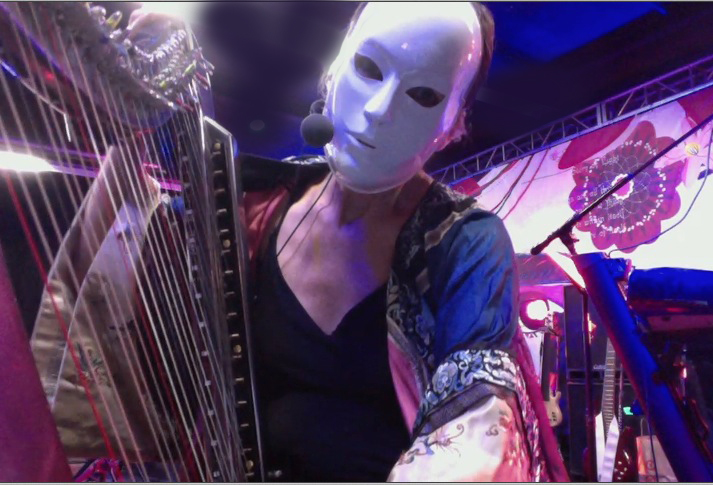 There’s always this beautiful tension with Steve between a passion to recreate the quintessential recorded version of a tune live on stage .. and his fascination with new sounds – which is why I’m in the band in the first place.

His interest and ability to recreate verbatim spectacular performances is one of the reasons I see him a rock musician with the soul of a classical virtuoso.  But it also means that whenever I want to do something different, I have to really ‘sell it.’

Sometimes that means I have to seed the new sound in when we’re taking a break, so he hears it first instead of hearing ‘about it’ – because if you say, “Hey Steve, harp with wa-wa pedal sounds like a Hammond organ” – or “This piece would sound great played in a French Impressionistic Style” it’s unconvincing, especially when you’re on an artistic deadline.  But if you can just show how cool it is – if you can just find a way for him to hear it …

And somehow today I did!  And he liked them!

So I get to play “The Animal” on harp (Wahooooo!) and I get to play my “Maurice Ra-Vai-el” interludy-thingy, too – and I’m thrilled, THRILLED I tell you!!!

But wait … that’s not all!  There were two more highlights today that I wasn’t even hoping for: 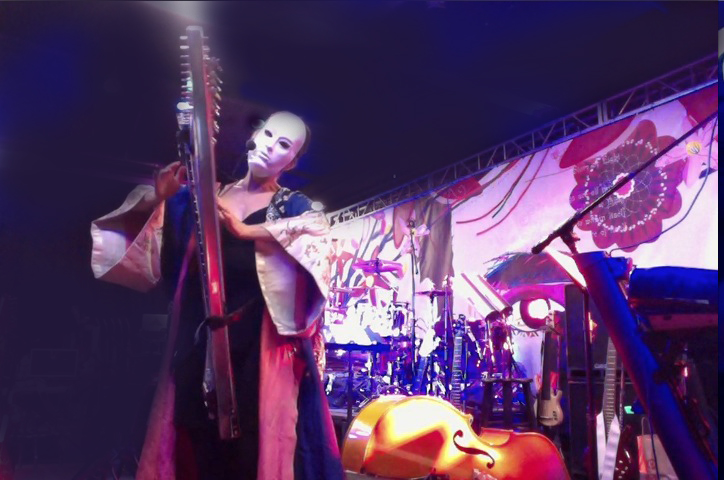 A Weeping China Doll experiment. Results not in yet.

WEEPING CHINA DOLL is one of the most challenging pieces from Steve’s new album “Story of Light.” Simply to remember the lever changes on this piece I took a workshop in memorization (no joke!).

The piece is epic and cinematic, and my part is very much like an orchestral harp part: broad sweeps, coloristic, with sounds that range from bell-like harp arpeggios to sounds like a Koto.

To execute some of the harmonic changes in this piece I use a Whammy pedal to shift my whole instrument down a half-step (to make that shift ‘by hand’ on my lever-harp you’d need to change 32-levers).  So I worked like crazy on this piece with my coach, Marta, and when we rehearsed it today, I poured all of that into it.

And when we were done, Steve put his guitar down, walked across the stage and hugged me.

And I didn’t even burst into tears.

AND FINALLY … MY SOLO.
In the show both Dave Wiener and I play cameo solos, and I’d decided to go with one of my Blues … which I played for Steve tonight … and got a negative.

Now, I swear this was not a strategy on my part, though it would have been a brilliant one, since I know that one of the best ways to get help from a master is to present them with a piece of work that’s not quite right — since they can’t help but want to make it great.

So after the rest of the band left, Steve sat down with me and together we worked out a new solo, taking pieces from three of my tunes and crafting a new tiny tour-de-force out of them.

And that was the end of my day.

Oh … and the costume photo?  Well, that was a semi-goal … to show Steve my idea for a “Weeping China Doll” costume.