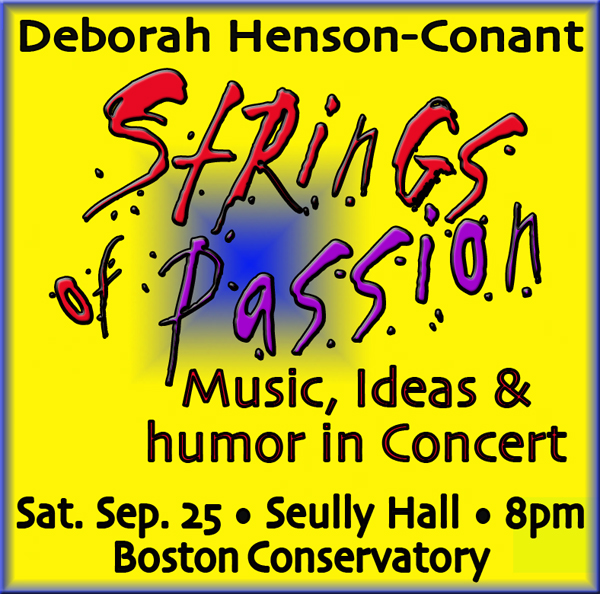 I’m working on a new project – or, I should say that I’m working newly on an ongoing project – called “Strings of Passion.”

“Strings of Passion” is a concert of music, ideas and humor, and the Sept. 25th performance at Boston Conservatory is its first Boston preview. The project was originally suggested to me by Vinnie Sestito, who books motivational speakers. After seeing my music special on PBS he wrote and suggested I take the combination of ideas, stories and music that characterize my shows and build a performance that lets the audience deeper into my process as an artist, letting them engage both musically and physically with it. So “Strings of Passion” is a both concert and lecture, both listening and interactive for the audience.

“Strings of Passion” plays out 7 principles, string by string, using the unusual instrument that was invented for me – a 32-strings electric harness harp – to show how they resonate and harmonize with each other: These principles include invention, collaboration, leadership, structure, character, exploration — and lift-off, as an idea becomes reality.

I’ve spent the past 2 decades reinventing my instrument, developing new shows, even writing full orchestra scores so I could explore how this new instrument interacts with symphonies. While I was focused on exploring this new instrument, and what it could do — what I learned was not only how to play it, how to write orchestra scores, how to film a PBS music special — but how ideas resonate through people, how groups collaborate, how leadership takes many different shapes. These understandings is what “Strings of Passion” is all about – expressed in words and music.

As I work on the piece, thinking through the ideas, watching video from other  performances, the strings change — like pulling a new instrument into tune.

It’s fascinating to watch previous performances, watching myself suddenly see a new idea or new expression take shape in the moment – based on how the audience responds — or if I sense they’re confused, finding a new metaphor, a new way to phrase the music — and, needing it in the moment, it appears suddenly – simultaneously to the audience and to me.

I love to watch that process, to be reminded that the audience and the performance itself can mold the composition if it’s structured in a way to capture ideas, to respond to them — a great compositional structure makes each performance an idea-catcher.

So now, in the days before the performance I’m like a fisherman, rebuilding the net, the structure of this piece.  Rediscovering and retwining the strings.

So, heck — I guess I’m inviting you to come out fishing with me.  Bring your pole – I’ll bring my net. I  can’t wait to see what we catch – but I sure do have an idea what it’s going to be like.  “Strings of Passion”- Boston preview Sept. 25, 2010 at the Boston Conservatory. Click here for tickets and more information.