It’s Day 3 of the final week of rehearsals with Steve Vai for his upcoming Story of Light tour , only 2 more days of rehearsal after this one.  Today we had a lot of stops and starts, rehearsing the acoustic set and working in a change of personnel (a new monitor engineer), plus Steve had some press interviews that took him out of rehearsal for awhile.

MY GOAL FOR THE DAY: to play the right notes.  That, honestly, was it – and if you’ve read earlier blogs in this series, you know that was no small goal.  Today I think I came close, even though I discovered I’d completely mis-memorized one of the tunes.  That’s where the stops and starts came in handy – the little hiatus gave me enough time to recalibrate. 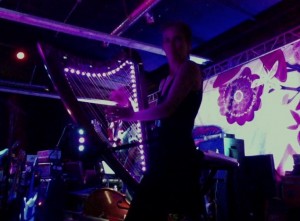 The harp lighting system Thomas Nordegg created to help me see the strings and levers ... but turns out to be pretty spectacular as a stage effect, too!

MY CHALLENGES TODAY:
– Exhausted and nervous about a couple of the tunes I know we’ll play.
– My in-ear monitor keeps falling out of my ear.  It’s like my ear gained weight or something since I was here in June.
– Now that we’re starting to use lights, I’m having trouble seeing my strings and levers, so Thomas Nordegg (Steve’s tech wizard) and I decided to try putting florescent tape on the levers and we fired up the “Story of Light” harp lights that he designed back in June (you can sort of see them in this photo).  And the verdict is: The harp lights help, depending on what color we use and so long as nobody hits the strobe or light showbutton on the remote control.  The florescent tape made things worse:  they glowed in the semi-dark – but they all glowed the same color so that made differentiating them harder. 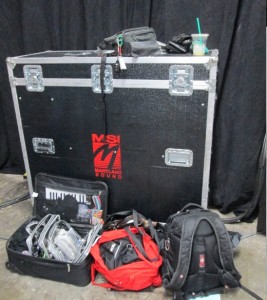 My little corner of the rehearsal hall

– I got a new, low-tech foam in-ear monitor to replace the fancy custom-molded version that was giving me so much trouble.  The new lowest-common-denominator version cuts out most other sounds out and doesn’t fall out of my ear.  A big relief.  Also my great little Loudbox-Mini Amp arrived from the Fishman, which gives me a huge sense of security – not just because everyone else has an amp but … well, because everyone else has an amp.

– The sound from the subwoofers knocked my computer off its ledge.  That’s not really a cool thing, except the computer survived and I might have gotten it all on video, from the computer’s perspective.

– Philip Bynoe (bass) gave me a list of essential living-on-a-tour-bus items (see photo at the bottom). Note he started the list with shower shoes. Yesterday he offered to buy me a pair of flip-flops because it worries him that I sometimes rehearse barefoot, so I guess footwear is an important issue on tour. 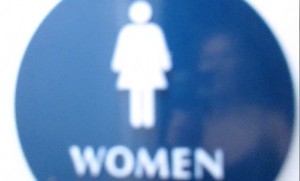 – I located a bona fide Ladies’ Room, which, like so many breakthroughs, only came after the current system became intolerable.

‘Til today, I’d call out “Girl Coming Through!” whenever I had to use the bathroom. Of the two private rooms, only one had a door that actually closed and in the whole bathroom (which includes FIVE separate … uh .. locations of deposit, including three of those watering-trough-thingies that line the walls of men’s bathrooms) … there was ONE single half-roll of toilet-paper, which I anxiously observed dwindling each time I visited.  Which was often, because, in addition to the coffee I’m drinking, I’m trying to keep hydrated.

By mid-afternoon today, that roll was an empty cardboard husk.  So I went to the front desk and explained the dire situation.  I was shown the storeroom … and more importantly – led down a dark, circuitous hallway to a room generally unneeded in a rock-n-roll rehearsal facility: the Ladies’ Room.

I felt I had finally arrived! 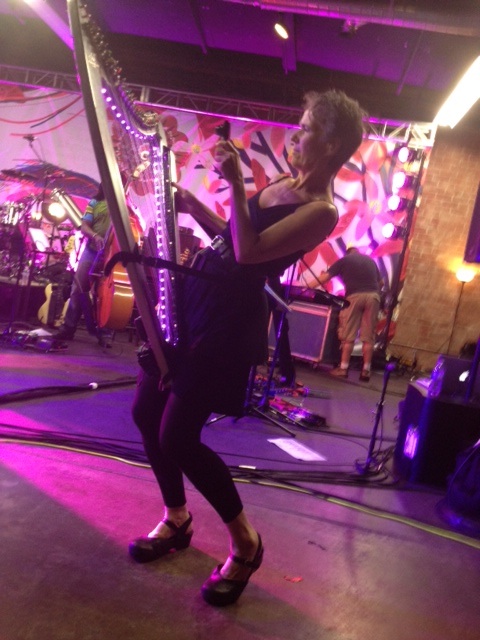 Me trying to photograph drummer Jeremy Colson through the strings of my harp – an experiment that didn’t work, or I’d show you the results! (Photo Thomas Nordegg) 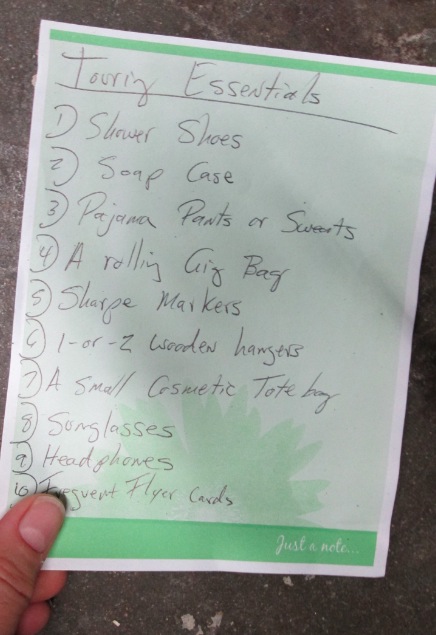