In which … I board the first plane of my adventure as a Rock-Harpist after a long night of practice and packing and self-inflict a mini-stigmata via mechanical pencil. (Steve Vai’s “Story of Light” Tour debuts Wed.  Aug 15 – Ft. Lauderdale, FL. Tour schedule is here)

As I began writing this I was sitting in LAX about to head to Ft. Lauderdale for the first Vai “Story of Light” show. Now I’m looking at the ocean outside my hotel room in Ft. Lauderdale. 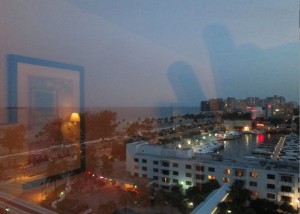 My room with a view in Ft. Lauderdale

I stayed up all night last night at my cousins’ house practicing after loading the Vai music onto my iPad, which will serve as my cheatsheet until every last lever change and chord voicing is firmly committed to memory.  Tonight I’ll make a paper backup in the hotel.

I’m still speaking Greek with this music although I own more and more of it, the more we play and practice.

My suitcase is so filled with gear there’s no room for clothing: a wa-wa pedal, distortion and a looper unit – neatly packed in Tupperware containers. My clothes are wrapped around the harp – added protection during transit.

Things I thought to people today at LAX but did not say out loud:

“You, Madam, have the most articulate toes I have ever seen.”
“Why … why…. it’s the pink sisters!!”
“Who are you guys?  The Society of People with Incredibly interesting Faces?”

What I blurted out in the airport bookstore. 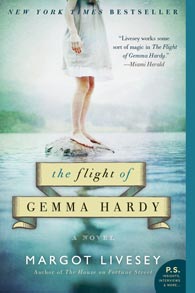 The book I bragged about in the airport bookstore, written by my friend Eric’s wife, Margot Livesey

“Hey, everyone! See that book?  My friend wrote that book! Well, I mean my friend’s wife wrote  it – and it’s a great read.  It’s kind of like Jane Austen but in the 1950’s.”  I stopped there, realizing I had not slept, and had experimented dying part of my hair purple and had splotches of bright turquoise glittery eyeliner on, the dregs left-over from a quick sample-session at a makeup counter. I suddenly inkled that identifying myself with Margo Livesey at that point was not going to improve her book sales.

DEFINITION:  “Inkled”: engaged in having an inkling

Stupid thing I did in Airport:
Jabbed my hand with a mechanical pencil – by which I mean that I had to actually pull the pencil out of my hand. The reason this is especially irritating is that two weeks ago I got pencil lead jammed under my toenail – from the very same mechanical pencil. And this was not something I was ‘trying’ to do.

I’d get rid of the pencil, but it’s an excellent pencil and – unlike most mechanical pencils – the lead doesn’t break off constantly while you’re writing.  But that kind of robust graphite spirit obviously has a dark side.

(Update 7 hours after impact: nothing untoward but a tiny puncture wound and a little bit of red –a mini-stigmata bumming around the suburbs of my palm).

Book I wanted to write today because it would look great beside all the other self-help books:

“How to Stay Exactly the Same” but I think a better title could be “How to Perfect Your Current Condition” – but that title would mean plagiarizing our friend Tom Bates who claims that’s his life’s current goal.

Wish me luck on the first show – and a clear, clear mind.