Boston, MA September 26,2012–Grammy-Nominated instrumental innovator, DEBORAH HENSON-CONANT has hit the road slinging her 32-string electric harp into the last place you’d expect a harp: a rock band.  Not just any rock band, and not as decorative fluff – but as a one of the 4 members of legendary guitarist Steve Vai’s 2012 band.

Vai and Henson-Conant are making instrumental history, and one thing that makes that possible is her new signature carbon fibre harness-harp developed by the CAMAC company in France, an instrument that runs through distortion, Whammy pedal, Wa-Wa and loopers, and illuminated by a strand of LEDs developed by Vai’s long-time tech Thomas Nordegg.

DHC is completely integrated into nearly every piece inVai’s show — and the two collaborated in months of rehearsals, each working to find the best ways to bring the voice of this newly developedelectric harp into the rock arena – and creating a new dimension to Vai’s onstage sound in the process. 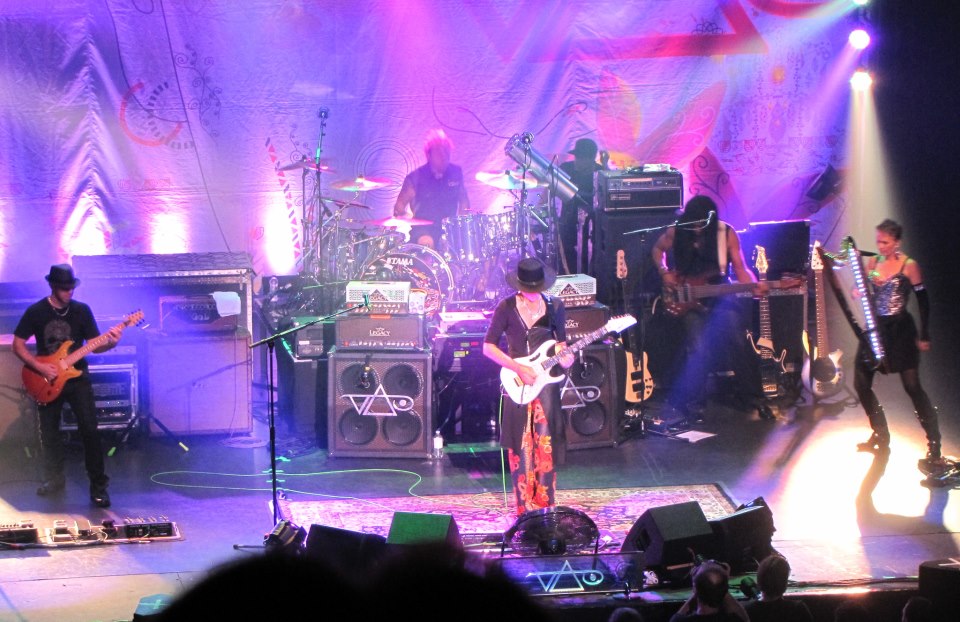 The Band onstage with the Spotlight on DHC - Photo Credit: Yvan Guenette 2012

Don’t expect ‘harp interludes.’  Henson-Conant plays a range of roles in the band, from pairing with Vai on the heavy-distorted melody of his new “Velorum” to a delicate impressionistic treatment of his classic “Whispering a Prayer” that gets an ovation every night –  to subtleties that only the most observant would notice: like playing Hammond B3 parts on electric harp – via wa-wa pedal. Then launching into her own original that takes the audience on a musical roller-coaster from Flamenco strums to wailing distortion in a 3-minute solo that shows sides of the harp you never thought could exist.

Henson-Conant has come off two solo tours of the US in the last 12 months, combining solo performances with her “Strings of Passion” clinics and symphony performances of original works like the ones that landed her a 2007 Grammy-Nomination for Classical Crossover. The Vai project is a departure for DHC who is best known as a solo performer who combines music and story in one-woman-shows. She culminates the Vai experience with a solo show “Solstice” on Dec. 21st in the Boston area. 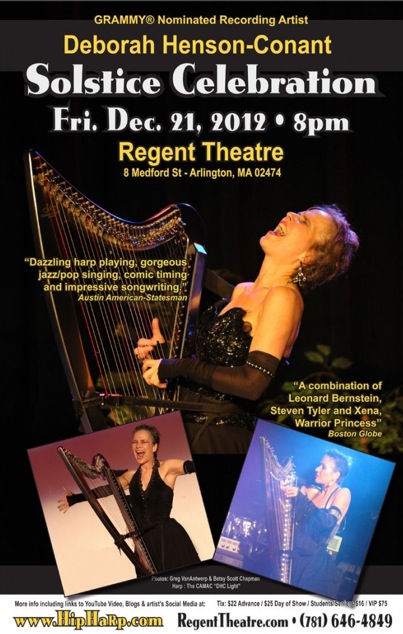 DHC (Deborah Henson-Conant) culminates her 4-month adventure as the rock harpist in legendary guitarist Steve Vai’s band with a solo show scheduled for the first weekend after the Vai tour ends  – to capture the energy of this moment between two realities, the Solstice moment, when “endings shift into beginnings” and to express that moment of shifting modalities in story and music.

As a solo performer, Henson-Conant creates a symphony-of-one experience, combining music, story and genres like Blues and Flamenco, using a looper pedal, harp and voice to create lush, jagged, expansive soundscapes and beds for improvisation.

In the past 25 years, Henson-Conant has reinvented the harp,  first, into a jazz instrument (on GRP/MCA/Universal in ‘90’s); then as a symphonic spearhead (Grammy Nominated for Classical Crossover in 2007); then in her one-woman threatre shows in 2010-2011) – and now, in collaboration with rock legend Steve Vai, as a new dimension in rock instrumentation.  Her collaboration with the French CAMAC company led to the development of the world’s first commercially-produced electric hip-harp (worn via harness).

Let me know if you’d like more information or to schedule an interview.