We’re leaving Helsinki and traveling to Tampere, an hour or so away – but still in Finland –  for our first show.  As I checked out of the hotel, I learned my luggage has just arrived at the airport, but there’s no time to get it, today, so I won’t see it until tomorrow.

That gives me another day’s excuse to wear exactly the same clothes – and because the bathroom floor in my hotel room last night was heated – which warmed the entire bathroom – my underwear and socks dried beautifully.  Clean dry socks and underwear on tour is truly a beautiful thing. 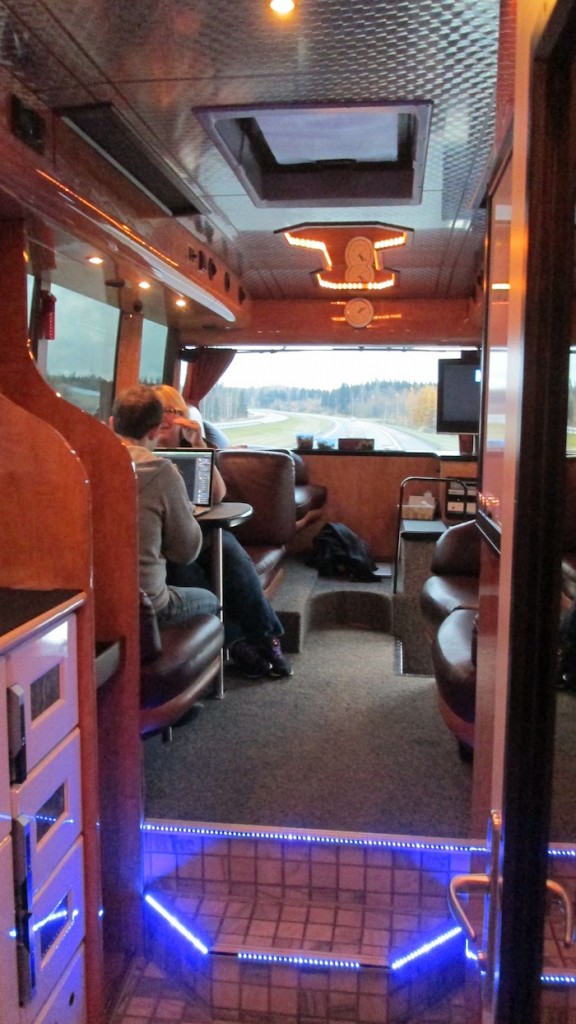 THE NEW TOUR-BUS is glamorous compared to the U.S. model.  It has real drinking glasses, plates, silverware and even wineglasses and an espresso-maker.  The design inside is less boxy and has more small unique ‘places’ – seats where you can watch the countryside as if you were on vacation; a small cubby between the sets of bunks for carryon bags.

While it still falls into the same four-section configuration:

But in this  bus, the sections are on different levels, so each feels more unique and separate.

There’s more wood, and different patterns: of carpet or ceiling.  Except for the LED lighting, you could almost imagine you were on a train 100 years ago, with curtained berths.

Unlike the last bus, this one has a shower, which takes up half of the tiny, tiled bathroom – but we’re not encouraged to use it as our primary shower since we can only carry so much water with us on the bus.

There’s internet access on this bus, but … and this is a biiiig ‘but’: it’s pay-as-you-go, with a different rate per megabyte in each country, so I guess that makes it emergency-net — and the bus-driver is friendly and happy, unlike our adorably curmudgeonly driver on the U.S. tour.

(The one anxiety-provoking aspect of the bus is that, unlike our last bus, which used an access-key for entry – each of us has a real-life key for this bus.  That’ll be a challenge for sure: keeping track of something like a key when I’m constantly changing locations and clothes.)

Dave and Miki in the forward lounge

As I write this, Steve is working in the back-lounge, Philip, Bev, Daron & Jeremy are asleep in their bunks and Miki and Dave are talking in the forward lounge.  I’m seated against the bunk-area steps where I can plug my computer in and write.

BUYING FOOD: I bought red Spanish grapes today at the market – more mottled in color than the red grapes we see in our market, and a little less acidic – at least this bunch were.  When I asked the grocery-clerk if they were seedless, he said, “Yes, of course – it’s written on the sign.”  Where I read: “Siemengarblegarblegarblemnfph.”  How could I have missed that?

I’ve taken to the old traveler’s trick of simply pulling out my change-purse and opening it to cashiers by way of saying: “I have no idea how much money you just asked me for and even if I did I wouldn’t know how to locate it in this pile, so please take what you need.”

I assume this will be the last day we travel in daylight, so I’ll take this chance to watch the outside world.

UDATE IN TAMPERE:  We’ve just arrived at the theater and learned that the show is nearly LOPPUUNMYYTY!!!  Yowza! 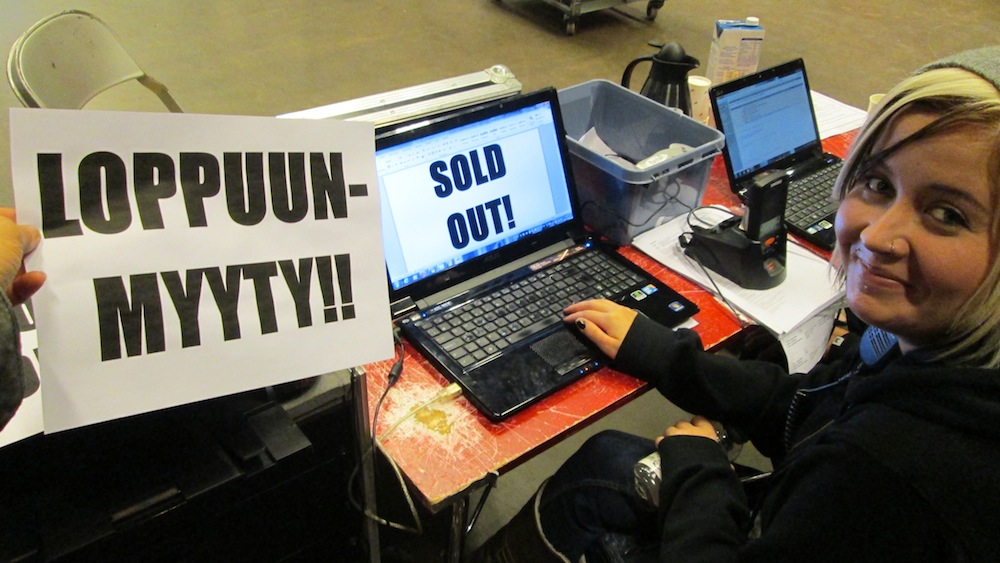