This Morning in Athens 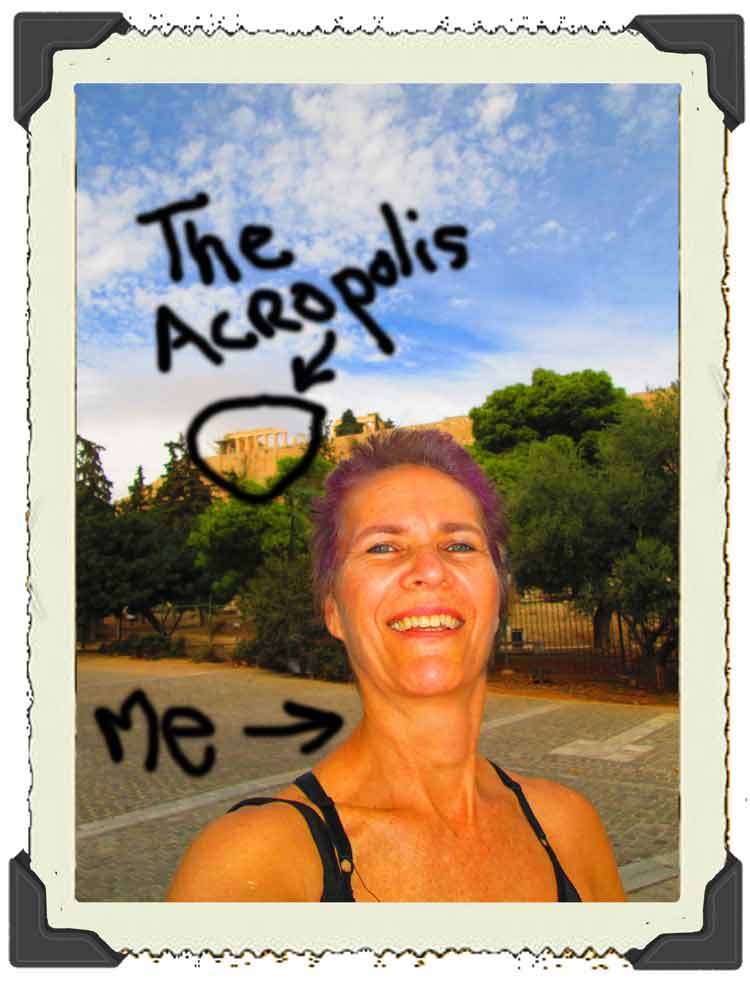 Last night we played Athens and today flew to Zagreb.

I woke up a couple hours before we had to leave for the airport this morning and figured I had 45 minutes to an hour for some exercise, so I stopped at the front desk of the hotel and asked which was the best way to go for a walk.

“Well,” the lady at Reception said, “It’s about fifteen minutes to the Acropolis…”

Now, that’s something you don’t hear every day.

So I took the map (no getting lost this time, like in Belgrade), and headed up the hill.  And fifteen minutes later (OK 20, because I stopped to buy figs) I was at the top of the hill.

At the top of the hill was a park, and in the park was another, much steeper hill, and on the hill there was a sheer outcropping of stone, and built onto the stone was an immense wall and at the top of the wall … was the Acropolis.

If you don’t know exactly what the Acropolis is, I didn’t either.  But I later learned (like, 5 minutes ago when I googled “Acropolis”)   that “Acropolis in Greek literally means ‘the highest point of the town’.”  But the word became synonymous with this acropolis because … well, you can read more about it here .  The point is, it was at one time the seat of government (correct me if I’m wrong), and later became a place of worship.

I didn’t have time to go into the park and up the slope.  Also, the only way to get in was to buy a 3-day pass and I was leaving Athens in less than an hour. And I was OK with that.

I’ve actually avoided the things ‘you really have to see,’ because they’re such big superstars it’s hard to imagine having a personal relationship with them.

Like … sure, I could go visit the Acropolis … but, like, everybody visits the Acropolis.  What’s special about that?

It’s not like I can have personal relationship with the Acropolis. It’s not reciprocal.  You can’t say, “Hey — you know the Acropolis?  Yeah … yeah, the ancient Greek one?  Well … check this out!  The Acropolis asked me up for coffee!  And spanakopita!  Yeah. Me!”

And you don’t get any points for discovering the Acropolis.  You can’t say, “Man, I just discovered the greatest little ancient Greek ruin today!  Nobody’s ever seen anything like this, before!”

But here’s what I learned today:  no matter what we see in books, no matter how many other people have seen the same thing, actually being there and experiencing it ourselves gives us perspective.  Not so much because we see it – but because we see ourselves in relationship to it.

We experience what being in its presence does to us.

So the real discovery — is what it reveals to us about ourselves.

Look, I’m sure that, in school,  I learned that the Acropolis was built on top of a limestone ridge.  But what I could never see in a book is how elevated and unreachable it would look from below.  How impossible it would feel, at the bottom of that hill, to ever be able to stand inside the structure on top.

And that was a very personal experience.

And, I admit that, like everyone else, I wanted capture the sense of my own discovery .. of how far away it felt — and I know this photo doesn’t even come close.

You’ll have to see it for yourself.

This post is part of my “Rock Harp Diaries.” I’m currently on tour in Europe playing electric harp in the band of  legendary electric guitarist Steve Vai.  My next solo show is Dec. 21st at the Regent Theater in Arlington, MA.