… and what I’m doing song-by-song on the harp 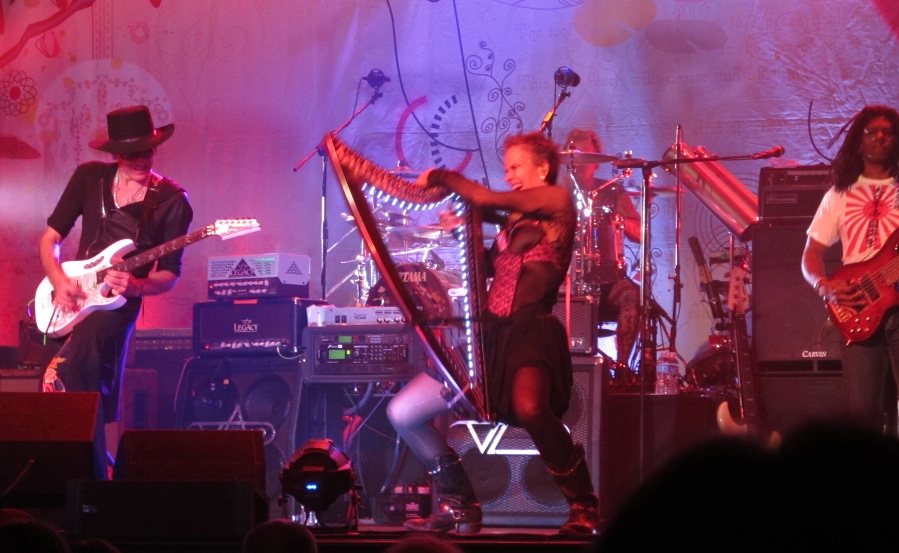 (Note – this is a really fast blog I made because I know a harpists are coming to the next few shows and I want to let them know what to look for in what I’m doing! )

2. Make sure you also read my blog ‘How to Enjoy a Steve Vai Show (even if you’re not a rock music fan)” to get an idea what Steve’s doing and what you might want to pay attention to:

3. Opening Act: Dave Weiner opens the show for the first time in Luxembourg He’s a great guitarist and he should be especially interesting to harpists, because he’s doing his opening set as an acoustic solo artist – so make sure you catch his part of the show!

4. You may not be able to hear me for the first few tunes. Many people experience that, sodon’t worry.  There seem to be 3 reasons:

SO if it looks like I’m “finger-synching” – I’m not! I’m really playing – I promise! And have no fear – you’ll soon start to hear me and begin to realize how the harp changes the dimension of the whole sound.

THE RUNDOWN – SONG BY SONG

I think of the show in 4 acts, which roughly correspond to Steve’s costume changes.

RACING THE WORLD: Loud, fast, exciting opener – I’m just playing with everyone else

VELORUM: Loud 2nd tune and I have a short distorted-harp melody with Steve, and then play what we originally titled the “Crazy” section which is seemingly random notes that have to be perfect rhythmically and that require a bunch of lever changes, then I play the melody again with Steve (actually I play it with him 3 times, so if you don’t catch it the first time, you have 2 more chances) (note: this is an excellent photo op as I am trying to embody my fierce harp-warrior as I do this melody with Steve)

BUILDING THE CHURCH: Loud tune but I have a little solo with Steve at the beginning (note: I worked for months on this little section, re-fingered it 4 or 5 times and finally harpist Marta Cook gave me a reality check on it, removed every-other note, and now it’s actually playable!)

TENDER SURRENDER: I play Wa-Wa pedal on harp (watch my left foot to see what I’m doing and hopefully you can hear how my foot affects the harp sound)

GRAVITY STORM: Loud tune where you probably won’t hear me but I try to make my small and probably un-hearable few notes LOOK really important – because they ARE! (watch for that – I do it three times, each time right after I play the keyboards)

DAVE’S SOLO: I’m offstage retuning the harp (see notes on that at the end)

WEEPING CHINA DOLL: I wrote a whole blog about this tune. I’m working on a different kind of physical hand release on the harp that Marta Cook and I worked on after seeing a video by dancer Pina Bauch – I’m trying to let the notes “throw me” back and really loosen my wrists and arms – it ‘should’ look like I’m almost floating – that’s how it FEELS, anyway). Sometimes I’m playing almost orchestrally, sometimes (like at the end), improvising to Steve’s melodies.

ANSWERS: It’s a new tune for me and I play keyboards and harp almost simultaneously. To play the chromatically juxtaposed little melodies at the end, I use the Whammy pedal to shift the harp into a different key where it’s possible to have melodies a half-note apart (which isn’t possible in the key the tune’s written in) – but I still have to shift 3 levers to make that chromatic shift.

THE MOON & I: This starts with a beautiful bass solo, accompanied by harp & percussion. Once the song begins, I play very sparsely, a repeated sequence of five notes. The guitar tech, Jaret, comes out and plays the same notes on keyboard. What I love about this is that each time Jaret & I play these 5 notes, Jeremy (the drummer) is putting them into a different rhythmic context, so even though they seem repetitive, each feels different. I also experiment trying different fingers (like, if you notice my left hand is often higher than my right in this tune: I’m experimenting switching hands)

THE ANIMAL: Loud and upbeat – I play WaWa harp and you might hear me. After the big improv section (where I usually leave the stage), I come back for the recap and play some fun stuff with bassist Philip Bynoe (note: when I come back in at the end, that’s a good photo op moment)

WHISPERING A PRAYER: I have a Ravel-type intro that I created with LH harmonics and RH arpeggios. The whole show stops, I walk out and play it (kid of like the harp/flute thing in Symphony Fantastique, if you know that) — then I play arpeggios through the tune; then interminable arpeggios oscillating between two chords, but it’s really fun (like in “For the Love of God” below) to figure out how to really embody the emotion of the arpeggios physically and imagine them in an orchestral sense. (PHOTO NOTE: the intro isn’t really a great photo op, in part because it’s probably the quietest moment of the show; also I’m concentrating so hard on hitting the notes that I probably look pretty tense)

LEVER NOTES: For the intro I have all levers up except D’s – so that gives me both C#’s and Db, and, in this case – a harpy-gliss feel but also ability to play the melody.

THE AUDIENCE IS LISTENING: A loud, upbeat song I’m not in. I’m offstage retuning.

RESCUE ME OR BURY ME: Pretty song Steve sings – watch my left foot – I’m using the Whammy Pedal to shift up and down a half-step as he changes key; then I play sparsely at the beginning of Steve’s solo.  This tune segues to:

SISTERS: One of my scariest moments in the show: it’s a very exposed ‘simple sounding’ melody that all Steve’s fan’s know – but because of the lever changes I have to play what would normally be the LH part with the RH and vise-versa, and shift the F lever back and forth between F and F# — and I find the combination of switching hands, open chords I can’t identify and essential lever changes to be very stressful and scary!!!!

But …  I play a special “Harpist’s Surprise” at the end.

FUNNY STUFF WITH “THE BEAST” “BEAST AND STEVE” SONG

SALAMANDERS: Pretty little waltz – watch my levering, especially shifting to the 2nd part of the tune, and then the final gliss going into the next tune – I think you’ll enjoy that,

PUSA ROAD: Hard to describe this tune, but you might enjoy watching some of the levering and bending; and in the second half of the tune I use the whammy to play low bass notes with Philip’s bowed bass – so you may see me hit that switch right before and after I play the low bassline

ULTRA ZONE: Cool groove and Steve has a fabulous costume for this. I try to look like what I’m playing is important … but it isn’t

FRANK: I have an opening ‘duel/duet’ with the other guitarist, then I play the melody and head offstage. [There may be another tune here … I suddenly can’t remember and have to get packed to go to the theater so can’t look it up!!]

BUILD ME A SONG: Fun song we build with the audience. It always modulates in the middle and I use the whammy pedal to do that.

FOR THE LOVE OF GOD: Scary, exposed intro with Steve (after the fun part where he’s conducting us) — that I occasionally dramatically screw up by playing an F# when I’m supposed to play and F, or vise-versa – so you might enjoy that.

Then I play accompanying arpeggios where I have to switch the F back and forth to natural and sharp – and try to remember which and when! Like in “Whispering a Prayer”, the big challenge in the second part of this piece is to embrace the musicality of playing an arpeggiated accompaniment and focus on physicality, responsiveness and think about it almost symphonically.

THE ENCORE: TARAS BULBA – fun song – no big solos, but I’m proud of the ending gliss which is a real harp-type gliss – but on lever harp. I do it by shifting the C-F-G levers all UP to sharp and the Db-Eb-Ab-Bb down.

(TUNING DURING THE SHOW: If the stage is very small, you might see me doing that. Sometimes I leave my wireless transmitter on and there’s a tuner on my pedal board (the place where I hit all the knobs and buttons of the whammy, wa-wa, distortion, etc.), so I’ll be offstage but looking at the tuner on my pedalboard. If the stage is large, I usually have an extra tuner offstage that I use.)

PEDALBOARD: From L to R: Wa-Wa • Whammy • Distortion 1 & 2 • Volume (the white box is a tuner. The grey box next to it is the wireless receiver). The looper is a blue box separate from these. 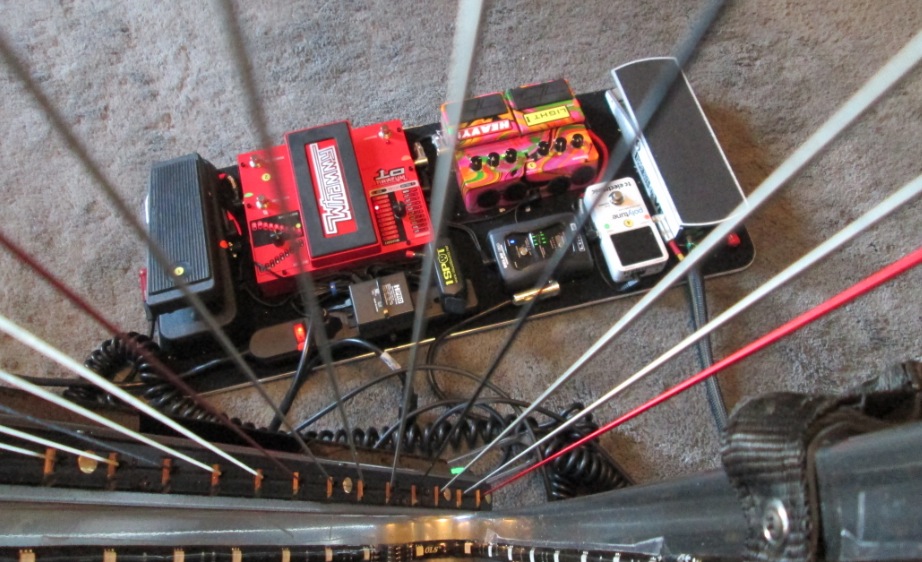 DHC's Pedal board (minus the looper)