This is part of my “Rock Harp Diaries” Blog series while touring with legendary guitarist Steve Vai from August 2012 – Dec. 17.  I’ll be home Dec. 18th – please join me for my Homecoming Solstice Show in the Boston Area on Fri. Dec. 21st!

On the first flight, from Heathrow to Madrid, yesterday, I sat next to a young man I’d earlier seen counting a large group of children, by which I assumed he was in charge of them. 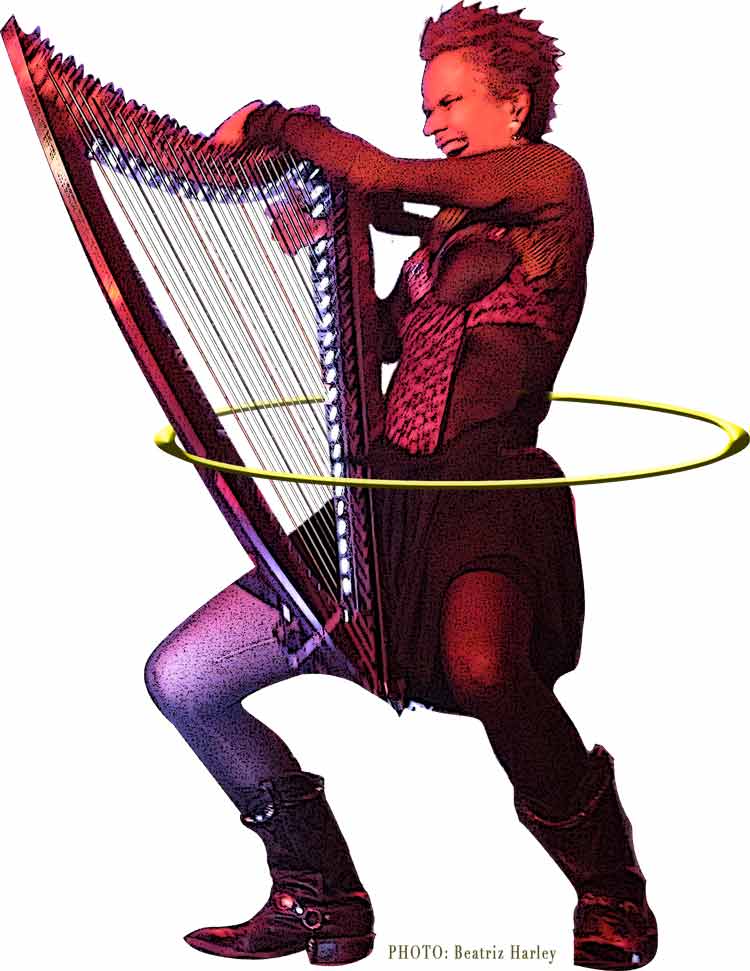 old me I was right, that he was their Spanish teacher and they were on a special trip to Spain.  I reciprocated and told him I’m currently playing harp with a rock band.

He looked at me in complete disbelief – and I think – started to blush.

“No … no … I mean because whenever I tell people what I do, I always lie to them and I tell them I play harp in a rock band.”

“Yes!” he said.  “I always lie.  But, I mean, right now, everything I’m telling you is absolutely true.”

We shared a few other stories about ourselves.

He told me about his last birthday party and the criteria for an invite, which was whether he’d had dinner with you in the last year.  He described the party in detail, including the two women he’d met earlier that week, a performing duo from Australia who did a cabaret of songs about wine, which doubled as a wine-tasting.

Then he told me everything he’s learned to do with a hula-hoop in the last year — which  was of particular interest to me since, it seems, hula-hooping is great for waist muscles in all directions – key muscles to develop for lower-back-protection if you dance around with a harp strapped around your waist 4-5 hours a day.

And suddenly, as I write this, it reminds me of the time my drummer told me a popular urban myth shortly before a show – about a friend of his who’d gone to Mexico and brought back a tiny, ugly dog  – which was eventually discovered to be a rat.

I was amazed and told the story to my own audience as a surprising bit of current news – which I thought it was – and wondered why they looked at me like I was lying.

Anyway … as I got up to leave the plane, I gave the Spanish teacher my card and told him that if he wanted to enhance his story about being a rock harpist in future, there were really just a few things to know:

I figured he could make the rest up, including the part about his new exercise video for rock-harpists:  Hula-Harp.

p.s. There is such a thing as a Wine Cabaret – I Googled it and found this: http://www.ozcabaret.com/ (check out their Showreel)

p.p.p.s. Once upon a time I was a nice English school-girl myself …