Mouradian to the Rescue

I always feel bad that I my social-media-immediacy quotient is often so low – er … high… well, whatever.  So instead of sulking about how much I’m not like those social-media whizzes who can take a photo and post it immediately (oh how I admire and envy them!), I’m just going to post ’em when I find ’em!

Ahhh…that’s a resolution I can live with!  So I just found this picture from last summer: 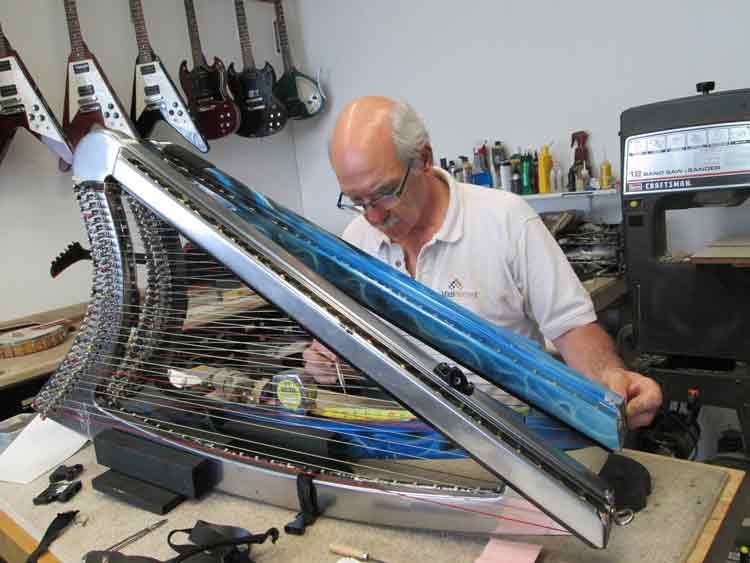 Above is guitar repair wizard Jim Mouradian, who has been retrofitting my harps for over two decades.  Jim and I once tried to mount a bass pickup on the bottom of a small concert harp waaay before the electric harps I play now were born.

Whenever I have a problem I need to fix with my instruments, Jim is the one I go to. His shop is less than five miles away and he helps me make the “user end” changes to my harps.  Many of those changes are eventually  incorporated into the manufacture of the instrument by my wonderful harp company, CAMAC harps.

Like me, Jim approaches harps as a member of the electric guitar family – sure, an exotic, eccentric member – but still in the family.  And because he has soooooo much experience repairing guitars he has a wealth of ideas about how to solve whatever problem I’m having.

My ‘problems’ – by the way, generally come from me wanting to do something with the instrument that isn’t usually done, but that I’m convinced is possible if only we could change this one little thing …

Jim’s the one who changes that one little thing.

In the picture above, Jim is measuring two of my “DHC Light” harps so we can anchor the front harness strap.  Because I’m so physical with my harps, the velcro-anchor that comes with the harp harness, just doesn’t work for me.  The harp falls off.

Until Jim made this change, I was trying to gaffer-tape the strap in place – which made a huge mess and wasn’t particularly attractive.  OK, it was downright ugly.  So Jim not only added to the functionality of the instrument with this change, but protected its beauty.