Harp gets Hip at the Altamont in Asheville, NC

On Saturday, April 13th I’m playing at the Altamont Theatre in Asheville, NC.

And on Thursday, April 11th I’m doing a casual “Meet & Tweet” at the theater, so people can see my harp up close (and even try it on!) – and I can tweet it out to Asheville’s tweetosphere!

You can read more about the show and the meet-and-tweet here or you can buy tix right now.

Wanna hear some of the things I’ll be doing in the show and take a look at my new audio-pedals? Here’s a little Bluesy video with my electric harp that I made to show you my new toys, like my wa-wa pedal, distortion and looper that the Steve Vai folks set up for me on tour – and that I’ll be bringing to the Altamont. 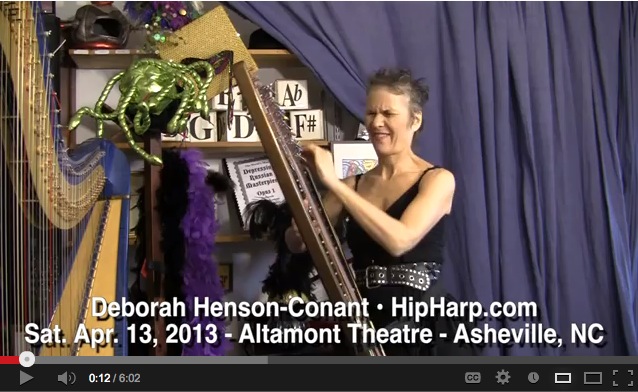 The last time I was in Asheville – a few months ago – I was playing in a rock band with guitar legend Steve Vai at the ‘Orange Peel’ (you’ll see some pictures from that in the video).

This time, I’m doing something completely different:   I’m performing my one-woman show in one of the most beautiful and intimate listening rooms in the U.S.: the beautiful Altamont Theater.

I know firsthand the power of stories and music as a foundation for great performances, and I’ve spent my life exploring the many ways they work together — and for my solo show, this is the perfect theater.   And I’m especially excited about this show because I’m debutng my new unfinished album — live.

That means you’ll see the way I build the loops to make it sound like many instruments playing together and how that creates an underlying structure for improvisation.

I think of each thing I create as a kind of birth – and since you’ll be seeing this show before the album is born — this  show is kind of like a sonogram where you get to experience the living project before it leaves my hands in recorded form.

More info on the show here.