What do Harpist Composer’s-Assistants Do?

Last night I met two of my new composing assistants, harpists who are helping me create the new ensemble version of “Baroque Flamenco” for the the US’s premiere youth harp ensemble.

Sebla Akbulut & Molly McCaffrey are both students at the Boston Conservatory. They trudged through the snow to come and help me in my studio outside of Boston. 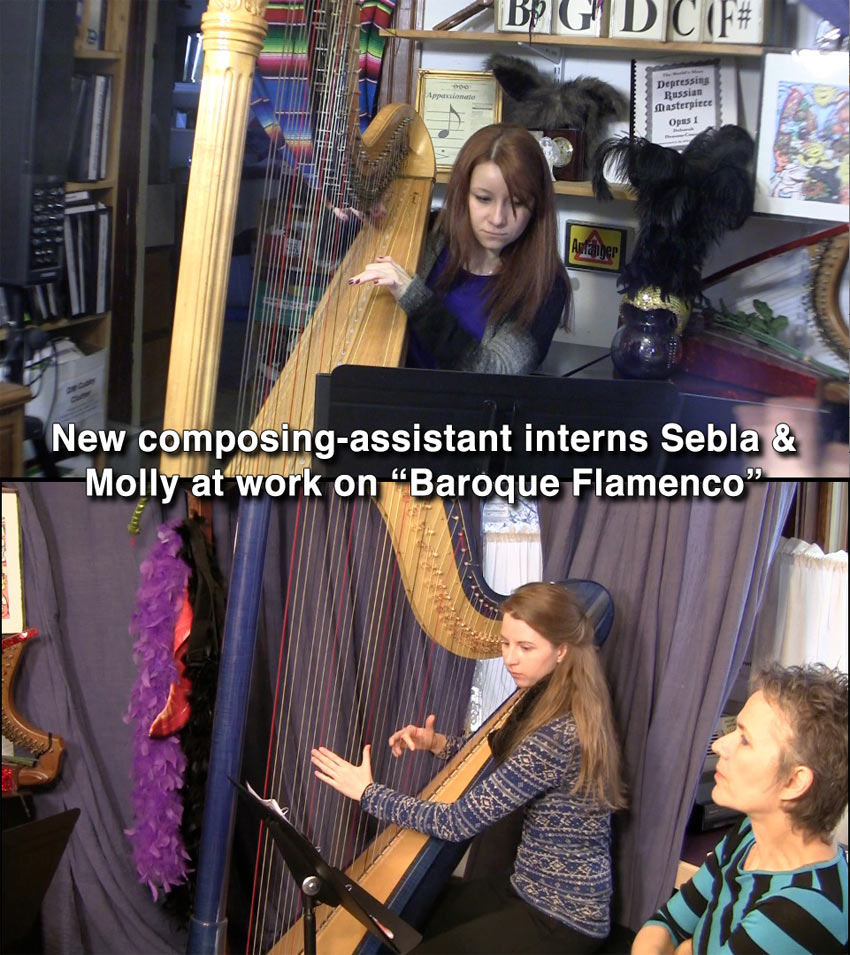 So, what do “Composer-Assistant Harp Interns” do?

Right now they play through the piece, making changes on the fly – moving passages up an octave or down an octave, observing the way I play a passage and then playing it that way so I can see if it really works the way I want.  They’re kind of like lab assistants — only they’re also part of the experiment.

Writing new techniques for an instrument is a combination of  pushing standard notation beyond its ‘standard,’ and then trying to make the manuscript ‘look like” the music sounds.  So hearing and watching other harpists interpret what I’ve written is part of process of developing the best notation for a certain technique – and also part of testing whether what I’ve written is what I want to hear.

Since I’m an improvising musician, turning improvised pieces into written-out pieces means I need to hear other people play them live, to make sure I haven’t removed the life of them by writing them down.  And I can’t play my own written-out manuscript because … well, because I immediately start improvising.

So composer’s-assistants are essential for me to get the music into written form.

And because my pieces are performance-based — meaning, the visual impact of the piece is important as well as the sound — it’s essential I see and hear other performers playing it.

So last night was “Step One” in finalizing this project that I’ll be turning over to the American Youth Harp Ensemble on April 1st!

My next steps?  Transcribe what I learned last night and update the manuscript with it, send my messy version to harpist-copyist Noah Brenner in Oregon to ‘clean up’ and then meet with Molly and Sebla again next week to do it all over again with the next manuscript changes!

Then … repeat that process until the music sounds and feels right!