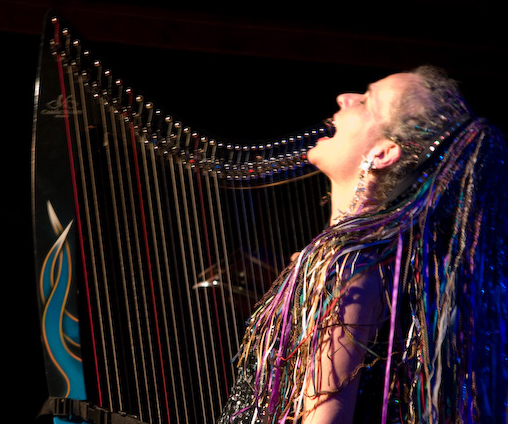 Lately, my shows have been changing on a fundamental level. I know this because of the kinds of comments I get.  People have stopped commenting about me, personally, or even about how much they liked the show — and instead, I they tell me excited stories about what the show is made them think about. This is a very exciting change for me.

About fifteen years ago, when I started to sing in my shows, people would say, “Wow, I didn’t know you could sing,” or “I’m not sure the singing is adding anything” or my all-time favorite, from my brother, “You actually let people hear you sound like that?” I decided to keep singing, regardless of any negative comments  – because if I don’t sing, the audience isn’t really getting ‘me.’  Eventually the comments changed to, “I love that song,” or “Are you Irish?” or “You sound like Carley Simon” or Joni Mitchell, or whoever (but never, sadly, Ethel Merman, which was what I was shooting for).

Eventually the quality of my voice (is it good? is it bad?) became a non-issue.  My voice seemed to become invisible and what I was trying to say started coming across.  Either that or I got a whole new audience — but  I could tell something had changed because of the change in how the audience responded and in what they responded to.

At about the same time, I started letting myself tell the stories that were in my head.  Every piece, for me, was a sound track or scene from a musical, movie or ballet – but I thought those stories were, in a sense, crutches – my equivalent of sheet music; just the schematic I use to recreate the music.

Then one day I stopped hiding the fact that I’m a compulsive story-teller and thought  “Why not tell those stories? Then the whole audience would be imagining a similar scene, every imagination in the room engaged in the same story.”  I was curious what that would do.  The comments changed. Along with the inevitable, “I liked you better before” and “Would you please just shut up and play”  I started hearing: “Oh I loved that song ABOUT…” so I knew they were experiencing the music as stories, and that was meaningful to me – because that’s how I experience them.

So recently, I’ve been working to get deeper into the pocket of meaning that’s behind a narrative. It started with my show “Strings of Passion” which took 7 principles that I use in developing my own work and life as an artist, and presented them in words and music.  It wasn’t a story-narrative, though it used story and spoken word – and was a new way for me to mix spoken word and music.

The comments afterwards were very different in that …

I’m suddenly remembering  the first time I went to Wales. I’d been told Wales was a country where singing was deeply prized and practiced, but I thought that was just a marketing concept, like “Castroville is the Artichoke Capital of the World.”

I was presenting a workshop about the Blues, and early in the workshop there’s a “call-and-response” section where I sing a line and ask the audience to sing it back to me.  I’d done the workshop a lot so I had a general expectation of what the audience would sound like when they sang the line back.  But what I heard in that room was completely different, and it felt like it rocked me back and slammed me against the wall.

It wasn’t that it was louder, but the resonance was so rich, and the sense of simple musicality so complete.  There was no hesitance in their response. These were people who sang as a natural expression. And that was a pivotal moment in my life – I never expected to be met with such willing, natural, complete and able musicality from every single person in a room of 150 people ages 4 – 90.

The sense of having stepped into the rich, vibrant center of where these people live was profound.

… instead of talking about me, or my performance, or the stories I’d told, people were telling me what the show made them think about, their own stories.

They didn’t even talk about the performance itself, just what the performance awakened in them – and I was met with this richness of storytelling. The show had become a catalyst.  It felt like if I’d said: “Here, have a bite of this bread I just baked,” and they responded: “Why, thank you – oh, and that reminds me (sweeping open a door I hadn’t noticed before, which leads to a gracious room, sumptuous banquet, candlelight, steaming plates) please come join me for a bite of supper, won’t you?”

It makes perfect sense that the quality of response is so different to a different expression from the same artist — I’d just never thought about how different it could be, or experienced how rich it might make my own life.

So as I work on “Honey, I Shrunk the Harp!” (working title of my new show) – and present the various half-baked versions to other performers and writers for input – I’m moved by the comments and images I get in response.  In “…Shrunk…” the narrative is much more a sketch than a meticulous painting.  Words are used not to explain, but to express, and along with the words and music, the dimensions of image and movement are a much bigger part of the work – so it’s more dreamlike.  The responses I’ve gotten are so evocative and rich, and because I’m getting them so early in the process, they’re part of the work’s development.

So what am I learning from this?  Maybe that when I’m willing to leave the art more open, when I don’t tie it up neatly with a bow, don’t wait until it’s ‘done’ to show it — but create it as a wireframe of strong images and music that evokes instead of presenting – then performer and performance become invisible, merely a doorway through which the audience steps to begin their own dreaming.

And then they tell me those dreams.