How I learned the Physical Zoom

Last weekend I broadcast my first Livestream studio shows – LIVE from my own TV-studio.

Even the folks who were scratching their heads a little:

What I personally  loved most about the show was what I learned.

Not when I was ‘trying’ to learn, but spontaneously in the middle of the performance: The Live-Body Zoom and the Hat-Fashion-Show.

It’s the moment of transformation for me: The moment when I learn to use the medium to reshape the art. 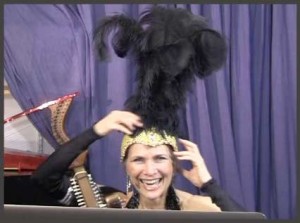 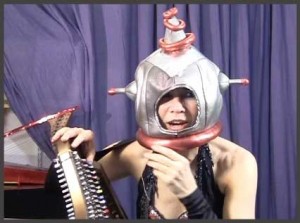 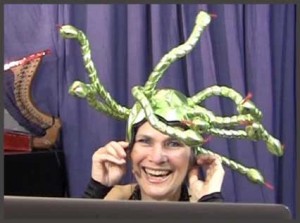 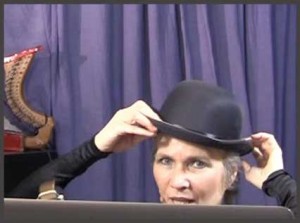 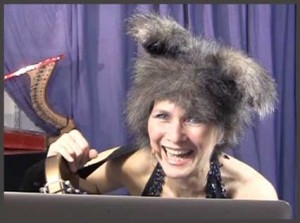 It usually happens like this:  I get the idea of ‘how this thing works,’ and try to make it do what I’ve always done.

It’s like when you first put on rollerblades and you try to ‘walk’ in them – because that’s what you do in things you put on your feet: walk, right??

But in rollerblades that’s awkward, clunky and inefficient.

Then you discover glide.

And what was hobbling you suddenly becomes glorious.

(Well, OK, on skates it’s glorious until the moment you fall on your butt, but that doesn’t deny the glory.)

The medium opens a new door, a new way of expressing and experiencing.

In this case, my old way of thinking was: this is supposed to be a lens people watch a live show through and the lens is not supposed to affect the show – it’s only supposed to reveal it, so if we just get the best audio sound and the best lighting, the lens will simply open a window to that.

But after our initial sound and video tests, we discovered limitations in both audio and video that we hadn’t expected:  I had to keep a certain level of sound to avoid the signal completely disappearing and my high-def camera didn’t want to play nice with the Livestream interface.

So my first thought was:  Aaagh! We just lost a major level of everything that lets me connect with the audience: I lost a huge level of dynamic expression in audio, and we lost the ability to have a high-quality visual image.

In other words, I was focusing on everything that made this ‘less’ than a live show.

I was oblivious to its advantages.

Those appeared in the middle of the show and in large part because I was searching for ways to reach the audience, an painfully aware that my ‘normal’ way (through sound and visual) was technically inhibited.

My desire to reach the audience was the constant.  My standard way of doing it was inhibited.

Here’s what happened in my brain:

Aaaaagh – I really want them to see what I’m doing, and I KNOW they can’t because the camera’s not hi-def and the screen’s small but I really, really, REALLLLLLY want them to SEE this!!!

And so I moved towards the camera.

Boom.  Window opens.  I realize this medium gives me the chance to create a spontaneous physical zoom that allows me to play with the medium in a way I wouldn’t have thought of if I could have relied on my old ways of connecting. 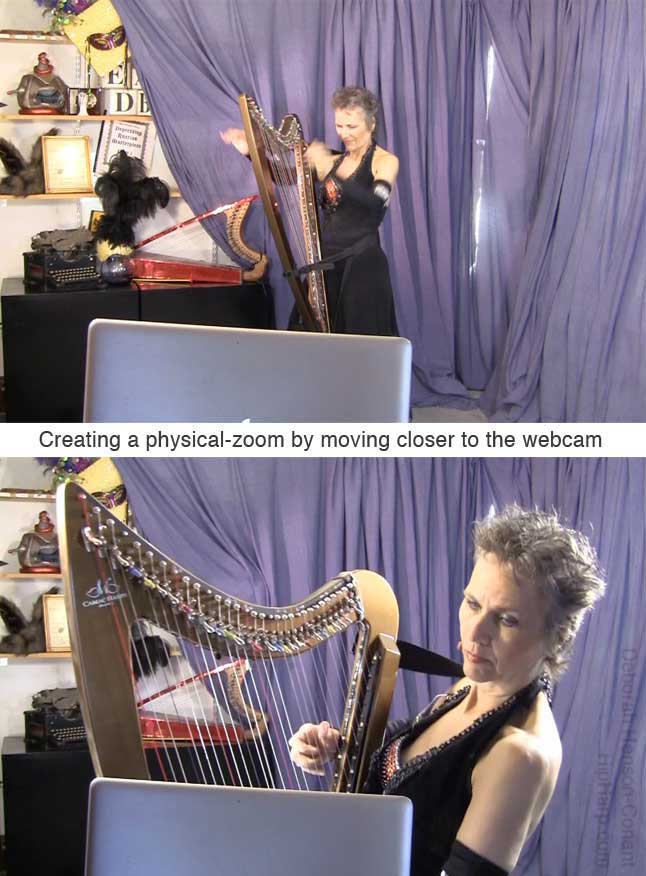 I started improvising with the medium, zooming myself closer to the camera for closeups of string bends or strums.  And I could respond immediately to my own impulse to show them what I was doing instead of having to indicate to a cameraman that he should zoom  on, or to practice it beforehand.

A new level of response and improvisation suddenly entered my performance through the limitations and opportunities of this new medium.  And it happened on a spontaneous, visceral level: through my desire to connect to my audience no matter what.

So, thank you limitation.

That was the second way the medium shaped the art, which came through a question.

Someone asked me a question about when and why I cut off my multi-color braids.  I explained it was a sudden decision, followed by “short-hair remorse” followed by the purchase of many – and often ridiculous – hats and wigs … which I suddenly realized were scattered around my studio — right behind me.

So I grabbed them and created  a spontaneous hat-fashion-show, starting with the sedate bowler … and progressing through the two helmuts: feather and space,  to the rabbit hat, and finally the green-snake-medusa.

OK, this time, I admit was a pretty silly shape.

Why the lab coats?  Well, it was an experiment, right? 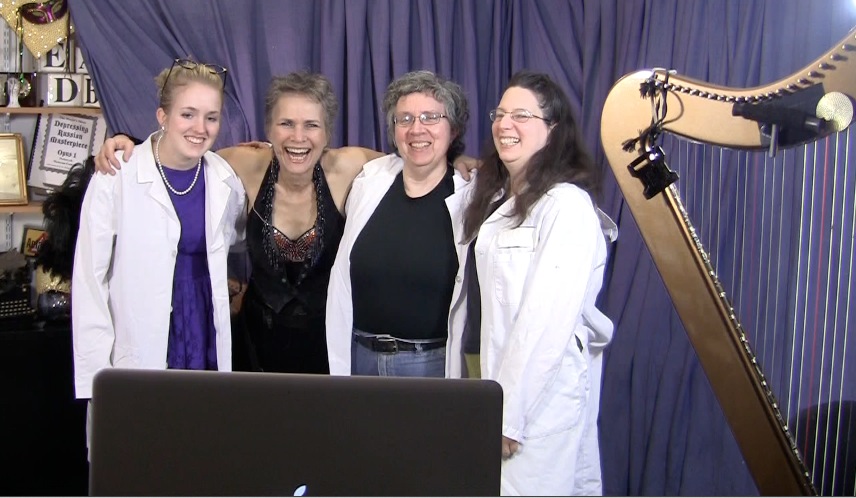