Updraft of the Soul 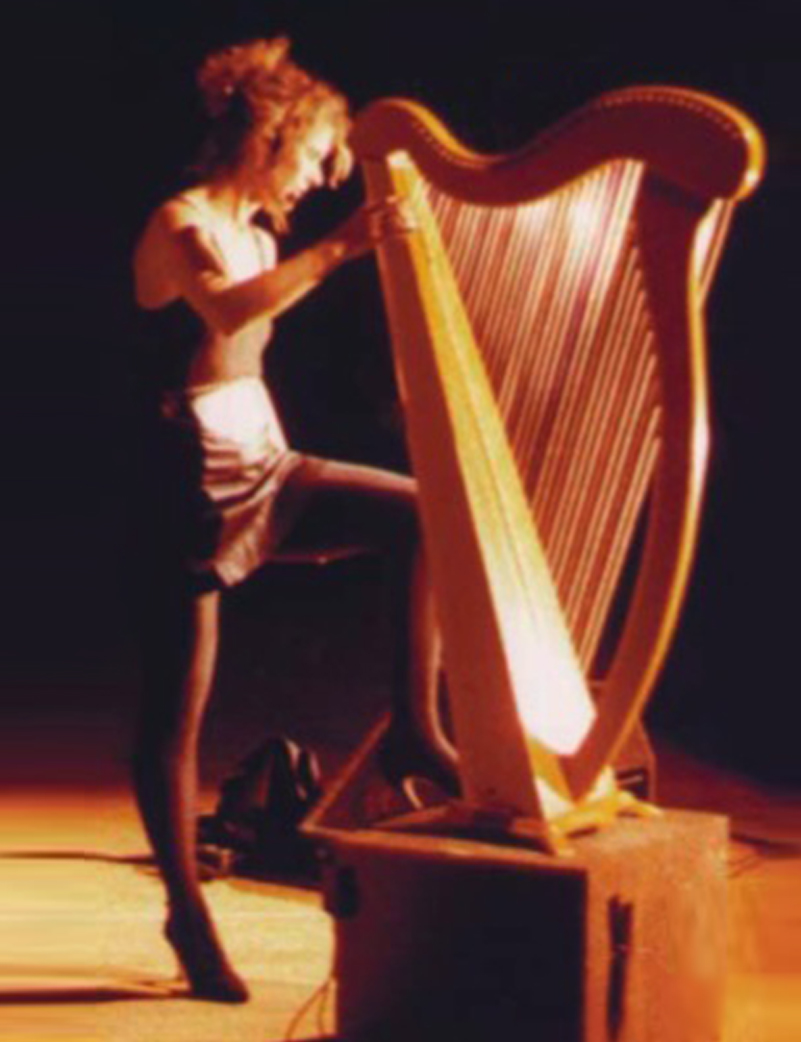 Onstage in Brittany with a borrowed Celtic harp

ded the festival and every year there’d be one show where he’d choose a group of musicians who’d never met. He’d put us in a theater first thing in the morning, introduce us and tell us to have a show ready by 8 that night.

The year I’m thinking about, the ensemble was  bagpipes, harp, voice, bass – and probably percussion.  Hard to forget the bagpipes, though.
We rehearsed, I’m sure, but since most of us were also jazz players, we could choose tunes we all knew, or string a bunch together, describe the layout “Ok, you play a kind of intro thingy, then I’ll come in with a bass-line, set up the rhythm and Max there will yell out which tune we’re gonna do.”  It’s the best kind of playing sometimes, because it’s completely spontaneous and you have to listen like crazy.

And it had been drummed into me: “if the bagpipes start playing, we’re in the key of Bminor.”  OK – so if you’re a bagpipe player and you know I have this wrong, forgive me – it was, like, half-a-lifetime ago.  The point, for me, as a harp player is that once the bagpipes start, there’s a limited number of notes I need to worry about — I can just set my harp into a particular key and just be there.  So the bagpipes give a kind of mental freedom.

Now, the singer and the bass player were a couple – I’m pretty sure of that.  And I’m thinking she was Melanie O’Reilly.  But I’m not clear on that point, either.  Here’s what I am I’m clear on:  It had been a long day, we’d gotten a little sidetracked at rehearsal and we didn’t have a full set-list.  The show started, and we’d been playing an hour or so, when – well, let’s just call her Melanie — started a song I’d never heard before.

I didn’t panic because I was too tired.  And then the bagpipes started.  That was my cue.  I shifted my harp into bagpipe key and, since I had no idea how the tune went, I just started playing glissandos.  For anyone who isn’t a harp player — though it’s hard to imagine there are many who aren’t in the world — OK, yes that was a sad stab at fringe-instrument humor — anyway for those who don’t know, a glissando is that thing harps do when the TV show is about to go into a dream sequence.  But some glissandos can sound pretty eery.  And the one I was playing was an eery-type.

I know there’s no way I can bring this moment back, and I’ve never tried to describe it – or even to explain it – and yet it stands in my mind as deeply important, so I want to try.  Behind me Melanie sang, “…she moved through the fair,” the bass player’s counterline sighing like wind — and the bagpipes, like the ghost of every lost thing you longed to find — and my harp, waves of giving in, me giving in to the experience of playing something I had never heard, each of us playing something so simple that we disappeared into the song, into the singer’s breath.  This, simply giving in to the music, playing in a way that required no skill — no ‘playing,’ no ‘doing’ – – just listening and responding with hands, with movement. Freedom.  Expression. Not “me expressing” — but the experience of being the expression.  And of being lifted.  Lifted, though knowing that if I stopped, the updraft would disappear.  All I needed to do was continue.  Simple, inevitable.

Years later, when I recorded my Celtic album, I chose that piece, “She Moves Through the Fair,” and recorded it.  And the piece is still beautiful, still haunting.  But my memory is beyond beautiful — the voice I heard, the place I went, the sensation of being suspended on the sound.  It’s the quintessence of live music. The updraft of the soul.