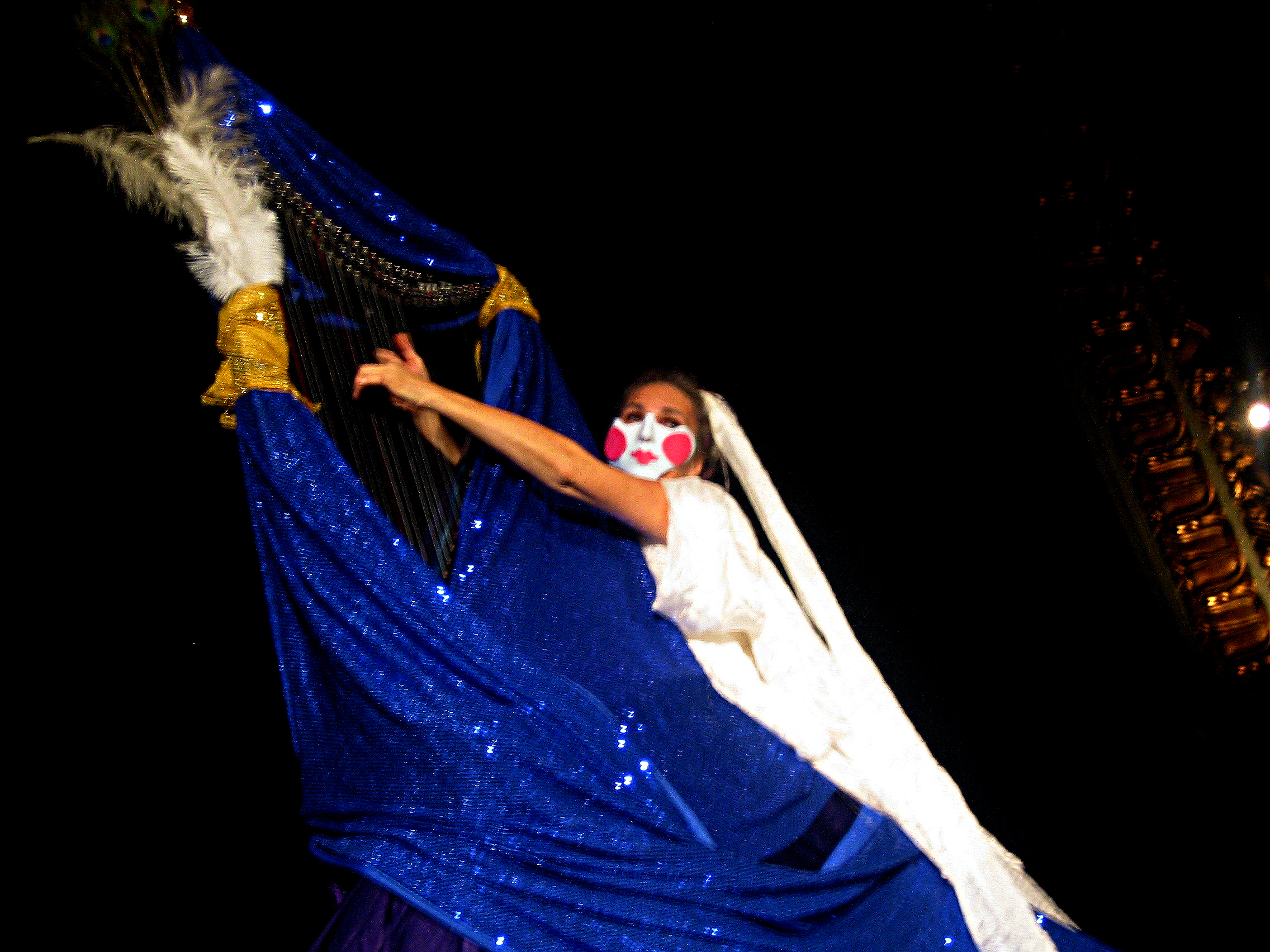 My assistant, Bea, asked me to review my own experience of the recent preview of my new piece “Honey, I Shrunk the Harp!” She wanted to know … how did she put it… “what YOU were feeling in the hours leading up to the show, while you were performing, and then what it felt like to be done.”

After the requisite, “Bea, I can’t possibly do that” I wrote her this email:

The thing is that “what I was feeling” is so vague, so diffuse and so like a 100-armed monkey, from how delighted I was with my sandwiches (I saw them on the catering table, grabbed them and hid them in my dressing room), to my anxiety that I’d invited an out-of-town coaching student to the sound-check, but I couldn’t remember if I’d promised  her I’d answer questions during sound-check or not.

And I was so preoccupied with remembering lines, posting secret cheat-sheets around the stage, and worrying about how to make the tech work that every time she asked a question, I just said, “write that down, and I’ll answer it Monday.”

People would come into the theater and say, “Hi Deborah” and I’d say, “Can’t talk. Trying to think” without even looking up from what I was doing.

In the days leading up to the show, I was grateful that the Regent Theater let me come in afternoons to rehearse. Just getting all my equipment to the theater was like a little performance in itself. The whole experience was so layered and overlayed, because I was still writing the show (but that’s normal – I almost always do that – so this time I built that in. I knew I’d be getting ideas even during the performance — so I tried to make a script that was really just a blueprint).

This time was different from writing other shows … yet more like what I did when I was a kid … in that I gave myself a very short development time. Instead of ‘building’ a show, I really wanted to ‘capture’ a show, so my strategy was to make a kind of creative net.  In that way, it was more like structuring  jazz suite than, for example, writing a piece for chamber ensemble.

We started with the title, “Honey, I Shrunk the Harp!” at an office lunch meeting one day, just because it was a place to start – we laughed at the idea, and I figured it was as good a working title as any.

I knew I wanted it to be 20-30 minutes long (this was often the length I worked with years ago when I wrote classical song-cycles – and the musical structure of this piece is something like a song cycle, but with some spoken-word sections and dance sections … well, and mime-esque sections), and I knew I wanted it to illustrate my personal experience of the past several decades journeying from where I first became a ‘harpist’ to now, when I have my own signature instrument that simply didn’t exist — even in anyone’s imagination — at the time I started.

The process is fodder for another blog, but it included emails with my composer friend Stephen Murray, phone calls with physical comedian Alex Feldman and writer/coach Natalie Engler, a two-hour directing session with performer Karen Montanaro, and structured feedback from the Advanced Writer’s Lab at NOMTI (“New Opera and Musical Theater” in Boston).  Bringing artistic colleagues in at an early point seemed to be one of the most important aspects of creating the piece quickly.

I wanted to focus on how I could create my own experience for the audience: the harp as a huge, ornate, fussy instrument and my need to fit into the role it demanded. If I just showed a snapshot of ‘what I was like then’ they’d see a nice girl in a black dress playing a harp. But that wasn’t my experience. So to create my experience, I made the harp 12 feet tall, hugely ornate, with peacock feathers, gold and blue, very sparkly. And I was in a dress that I could barely move in, white, frilly — and with a mask.

The cartoon aspect of that is what I experienced internally, so that’s how the piece begins.

The other thing I wanted to get across, and I need to work a lot more on this: is that my experience over the years was one of molting, like a snake leaving one skin for another. I didn’t always know what was coming next in the transformations, but I could feel the huge discomfort that I didn’t fit my skin anymore. As I continue to work on the piece, that’s another of the concepts I want to make clearer.

As I worked on the piece, and videotaped it, I was very struck by how close I actually got to illustrating my experience, though my goal in this performance was simply to get the first draft on stage. Being able to show that journey: starting as an artist who felt separate, and literally not up to this huge instrument, the struggle to connect with it, to the final scene where I discover the harness, strap into it like an umbilical cord, and literally take the heart of the harp onto my body like a part of me that was missing — this metamorphosis has been so painstakingly slow in real life!  It’s exhilarating to see it happen in 30 minutes!

Even watching the first draft of the show I think: Yes! That’s what happened! That defines my experience, That tells my story! Even in a still-rough form, being able to embody and express my own experience feels powerful – almost a kind of relief — like remembering that word that’s on the tip of your tongue, and saying it.

That doesn’t mean that all of this is clear to the audience yet. Now I’ll start working through the piece with coaches and directors. I’ve already started working with Alex, who watched the performance, took notes, and we have a list of what we’ll work on to make the piece clearer. For example, there’s a section where I pluck the feathers off the harp, while I’m singing: “Take them off one by one, to find out what’s inside. The trick is not to build it up. The trick is: not to hide.”

I thought I was taking huge amounts of time with that — but my Alex pointed out that I raced through it, missing the opportunity to really let the audience experience that moment. He gave me about 2 pages of notes like that, so now we’ll start working through them.

And I’ll take the script and the music back to my music theater writing group and work through that with them as well. 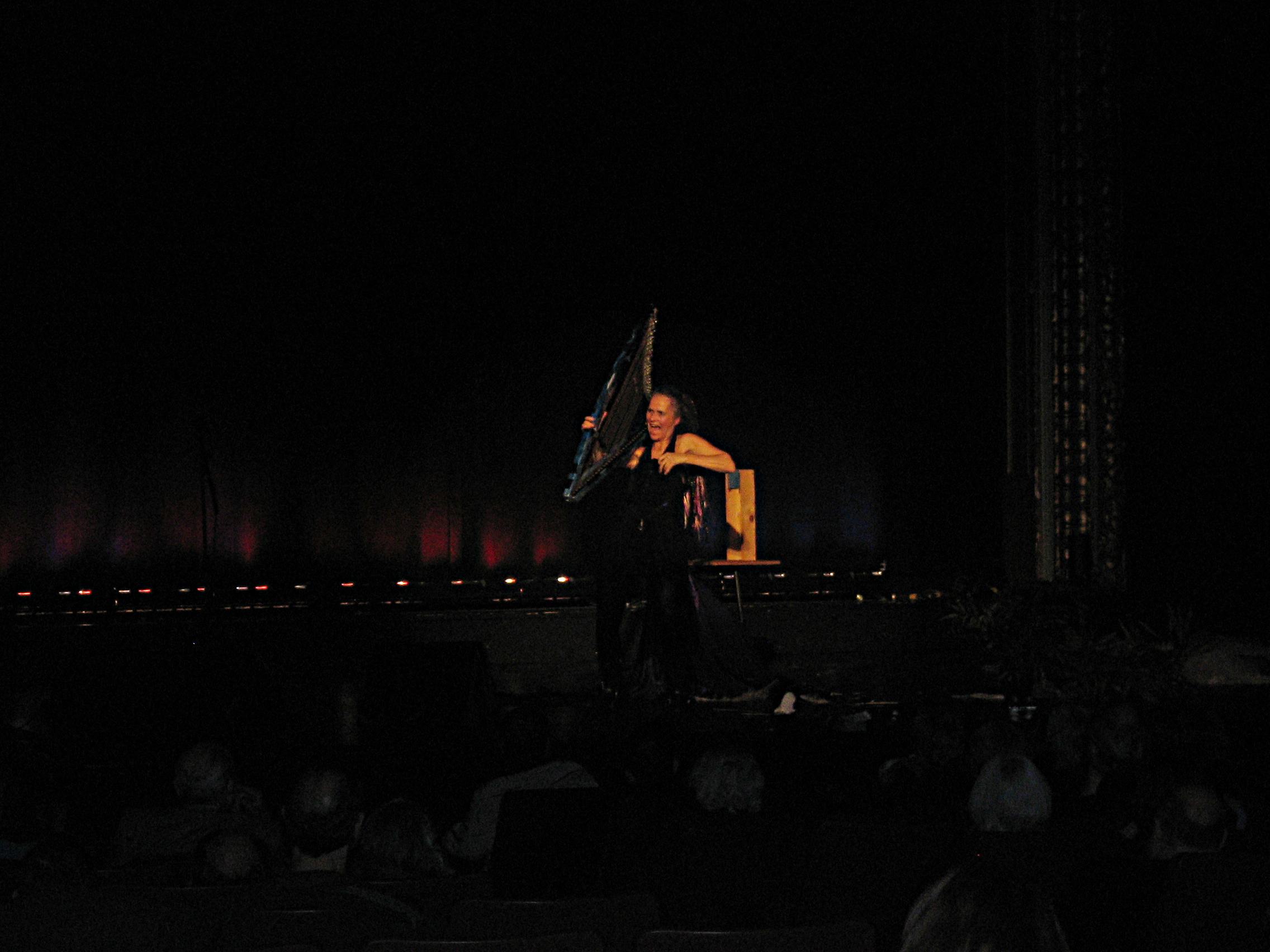 So – in looking back, the two things that were most different about how I approached this piece were that, from the very beginning, I forced myself to get my half-baked ideas down on paper in script form, and that I shared that script with artist, writer and performer colleagues. I just said: “Will you look at this and give me feedback?” I had a very limited time with each person – an hour or two at most –  but we simply focused intensely on it, they gave feedback and generated ideas — and I took those ideas and built them into the piece.

And now … first preview performance under my belt … I’m ready to start working on it with a director.

So it feels good.  It feels like a beginning.