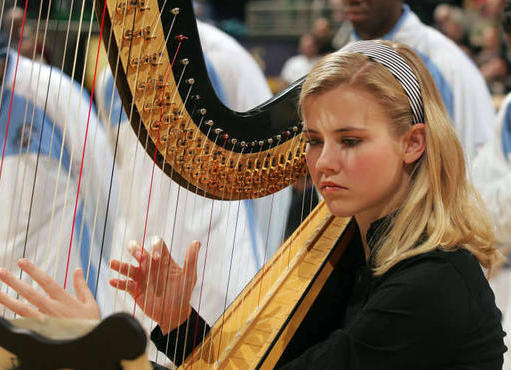 This morning I read a Facebook post that helped me understand why I’m — well, kind of obsessed with coaching musical independence and publishing the music I’ve created.

If the idea of coaching ‘musical independence’ sounds strange, I’ve only recently – like in the last couple of weeks – come to understand that when I teach harp players to play Blues, or create repertoire, or arrange music as I’m doing in my “Hip Harp Toolkit” course- what I’m really doing is leading them to musical independence and to express their own musical voices.

But until this morning, I hadn’t made the connection that the same is true when I publish my compositions.

The revelation came through a Facebook post, written by harpist Kipper Edens Ackerman about Elizabeth Smart the young Utah girl who was kidnapped in 2002, and who, I learned this morning, plays my piece “Baroque Flamenco” – which I read is an important expression for her – and the post was accompanied by a video of her playing it. (You can read more about Smart and her relationship to the piece in this article from the Ledger-Enquirer).

The post was referencing an NBC special coming out next week about Smart’s new book.

There was something in the wording of the post that helped me understand that once I write a piece and someone memorizes it, or once I show people how to arrange and improvise their own music that music becomes a part of their voice – a way for them to express their own human experience.

“[Elizabeth Smart] said she only had one piece memorized because this one took her forever to learn… Elizabeth was asked earlier in the evening how she managed her anger and rage once she was home from the nine months of terror. She answered so eloquently and said that when she became angry, she would sit down at her harp to practice and the rage never came!”

I kept coming back to “… she would sit down at her harp to practice and the rage never came.”

That caught me because the subtext or backstory of the piece – the story in my head, and that I share with people I coach to perform it– is the story of a woman who liberates herself through her own personal power, through a dramatic expression of physical and musical strength and presence.  But it’s a secret backstory – it’s not written anywhere explicitly in the music.

But as I read the post, I kept coming back to the word “rage” and I finally realized that rage comes when our power of expression is thwarted.

And so long as we are expressing and that expression is not thwarted, all the human energy that is bottled up in rage, can find voice in our own expression – and can even bring us joy, peace, and human connection.

And that helped me understand why I find myself so passionate about publishing music and coaching musicians on how to express themselves with their instruments.

After reading that post I’m even more excited about starting my new “Hip Harp Toolkit” course with a group of musical-harp-adventurers in less than 2 weeks! (And yes, as of this writing, there are still a few spots left in the course, so please read about it and join me).

As for my revelation as I read the post …