Honey, I Shrunk the Harp …
and the Orchestra! 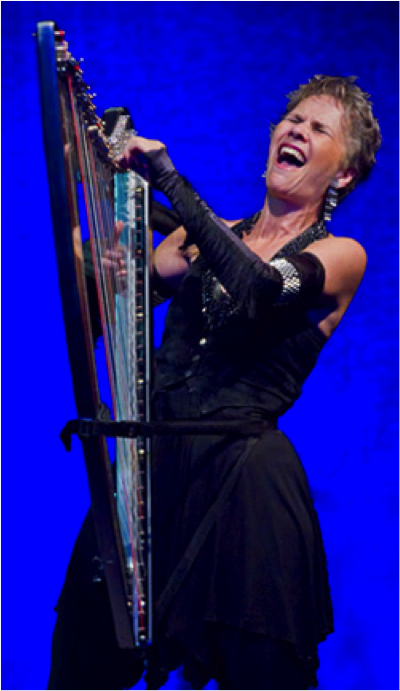 What if you shrunk a harp, strapped it on and plugged it in?

That’s what GRAMMY- Nominated electric harpist, composer and vocalist Deborah Henson-Conant (“DHC”) will do when she joins the Indianapolis Chamber Orchestra  Sat. Nov 9th, 2013 at 8pm as guest soloist at the Athenaeum Theatre in Indianapolis, IN.

She’s a modern-day orchestral composer who strides onto stage like a rock star wearing an instrument that was invented for and named after her: the “DHC Light” electric harp – singing, playing, telling stories from her life and pulling sounds from her 32 strings that you’ve never heard before.

Her music fuses Blues, Flamenco, Celtic, Folk, and Jazz. She blurs the line between musical performance and theatrical event – telling stories, singing & playing her harp with the symphony – and she’s a bona fide symphonic composer whose 2006 release “Invention & Alchemy” received a Grammy Nomination for “Best Classical Crossover Album” and was made into a one-hour music special that appeared on PBS stations nationwide.

The Indianapolis Chamber Orchestra, led by conductor Kirk Trevor, is as streamlined as the soloist – with 34 musicians from violins to tuba, instead of the a hulking 70-players in a standard symphony orchestra.

“What’s cool about this show” said Jeila Irdmusa, DHC’s press liaison, “is that there are so many different elements to the experience.”

“Just take a look at the theater – and it’s like you walked back into a 19th century vaudeville hall – but instead of standard concert seating, the Athenaeum Theatre has cabaret-style table seating.

“So you sit down at a table and have a drink and you’re hearing an ORCHESTRA live and seeing something you’ve never seen before – an electric harpist playing everything from Flamenco to Blues… telling stories, singing – in an integrative, inclusive experience – moving around the stage like the harp was actually part of her body!  The flow – stories become music – music becomes words, like in a conversation. But it’s cinematic. It’s like you’re talking to your best friend and all of sudden you realize she’s up there singing with a whole orchestra – and strumming something that looks like it came from outer space.”

DHC’s harp is definitely unusual-looking.  It’s built from carbon-fibre and moves with her as if she were a Centaur or a Satyr – a mythological beast that combines both player and instrument.

Harp Is On The Rise

Harp players are one of the fastest-growing musical populations in the world, and the “DHC Light” is so popular now, the [lag time] to buy one is up to 6 months.

DHC recently returned from South America, where she was chosen to represent the United States as a citizen cultural ambassador to the country of Paraguay, where the harp has recently been officially declared the country’s national instrument.

What Will you Hear?

These are some of the original compositions for orchestra by Deborah Henson-Conant that you’re likely to hear (and see) on the program. Of course … the program is always subject to change …

The story behind the music:  Translated, this means “Little Latin Thing” – it’s a melody I heard in my sleep — not the dreamy kind, but the ‘wake-up-and-get-dancing’ kind.

The music: This is basically a Samba – with a nuevo-Flamenco cadenza – all instrumental.

The story behind the music:  This refers to the classic Irish ballad about the young boy who goes into battle, “his father’s sword girded on, his wild harp flung behind him.”

The music: This starts with Irish ballad, but quickly transforms to battlefield drums, then to the classic Irish dance rhythms, and a center-section duet between solo fiddle and harp.

The story behind the music:  I was convinced that the dogs in my neighborhood had a national-canine-anthem, in the form of an upbeat Blues.  Then I realized they probably also had a cultural exchange program with dogs in France and Germany – but each would have a different take on that anthem…

The music: This is an upbeat Blues, in the style of 50’s bebop poets – combining spoken word with music, and an orchestration that’s heavy on the brass and woodwinds.

The story behind the music:  This is one of my most-requested songs.  I wrote it in memory of my mother’s voice, and the lullabies she sang every night.

The music: This piece features English Horn and strings, as well as electric harp and voice.

The story behind the music: “There was once a troupe of Flamenco dancers who discovered that their new guitar was actually a time machine – but by the time they discovered that, they were already in the court of Marie Antoinette.  She was hosting a ball that night, at which everyone was dancing the minuet.  So the Flamenco dancers attempted to fit in.  This was the result.”

The story behind the music: This is the story of an incredible willow tree that used to grow in an urban area near where I lived.  Here’s a video of the tree and the local High School choir singing a version of this song – just a week or two before the tree was demolished.

The music: Calypso-style with vocals and lush orchestrations. This  is one of my favorite orchestrations – you won’t hear it in the video linked above, but you will when you see the orchestra performance!

The story behind the music:  You’d think, with this title, that this is a Blues – but really it’s a bebop romp for two harps, orchestra – and quite likely some unexpected orchestral soloists.  You’ll get to see the ICO harpist in a whole new light as she’s featured in this tune with me.

The music: A Bebop with electric harp and orchestra.

Catcher in the Rye:

The story behind the music:  I was inspired for this song by the juxtaposition of the classic Robert Burns ‘Comin’ Through the Rye’ and the passion in the book “Catcher in the Rye.’ My assistant describes this piece as “a jungle warrior tribute to J.D. Salinger’s literary masterpiece.”

The music: This piece starts out with an almost delicate version of “Comin’ Through the Rye’ and then evolves quickly to a driving rhythm and the use of distortion on the harp to create soaring, searing melodies.

Congratulations, You made it this Far!

The story behind the music:  This is the birthday song for the birthdays you wish you didn’t have …

The music: All strings and vocals, with an upbeat melody and an almost gospel-style melody.

Way You Are Blues

The story behind the music:  This is a Blues I wrote for my husband to sing to me, with everything I wish I could hear him say over and over.

The music: Straight-ahead Blues with a nothing-left-out, no-holds-barred, my-harp-is-really-an-electric-guitar-in-disguise ending.

If we have time, we’ll also add some video, but really … just come to the show.  There’s nothin’ like live!!

Quick Info about the Show

Please enjoy and share this video that gives show information!