So, what do I actually DO? 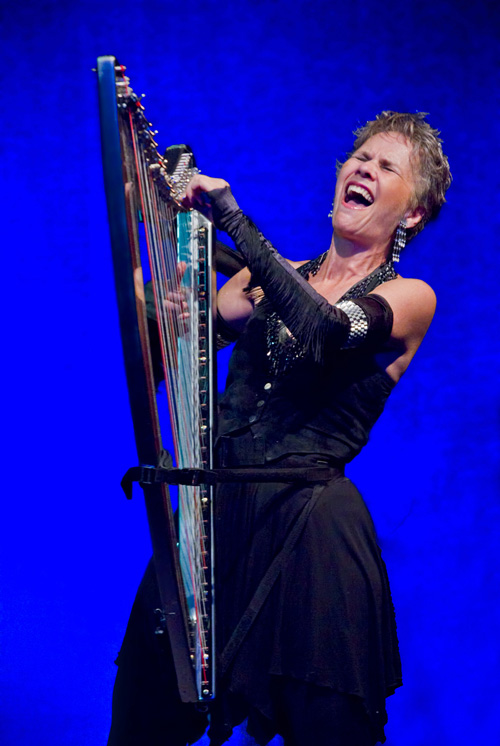 People seem to have a hard time wrapping their mind around what I actually do.

My new artist liaison, Jeila, can totally relate. Before she started working for me she couldn’t figure me out, either.  So, I asked her to look through my bios and choose the descriptions that would have made the most sense before she’d ever seen me:

Music, theater, humor … and sounds you never expected could come from a harp.  Styles from Blues to Flamenco, sounds from electric guitar to esoteric strings.  And a Grammy-Nominated solo artist wielding her electric harp, looper and voice as if all of life was an orchestra of one.

Read on, or see for yourself! Deborah’s upcoming shows are:

What do you SEE on stage?

One woman dressed in black leather leggings and cabaret-gloves. Short-cropped hair with purple highlights – and silver-hung boots.  Striding onto stage like a rock-star.

What do you hear?

One woman telling stories, singing and creating the soundtrack for every dream she’s ever had.  Blues, like the ultimate culinary seduction of “I’ll Be Your Sous-Chef, Baby.”  Layered cinematic journeys like  “The Adventures of Doña Quixota” (Don Quixote’s  alter ego) or “The Wild Harp.”  Quirky rhythmic soundscapes like “Under the Bed,” ballads and blazing Flamenco-inspired romps like “Cosita Latina” and “Baroque Flamenco.”

Her shows are a contrast in bombast and intimacy. The paradox of an exquisite showman who can shift from jaw-dropping virtuosic music you’d never imagine could come from a harp – to talking with the audience as though they’re her best friends.

Her instrument, too, has a huge dynamic range. You don’t think of a harp as loud, or Bluesy, or percussive – but this instrument is all that.

“The fact that it’s electric is what makes that kind of range possible,” she says. “Each string has its own individual pickup, so you can hear every sound, all the subtleties and intricacies – from Bluesy note-bends to Celtic embellishments.  But those pickups also let you play really loud when you need to.  Like when I’m playing with full orchestra – or with a rock band.  And the looper lets you layer sound on sound for rhythmic or atmospheric sections.”

Alone on stage, her shows are all about the power of one.  Put her with an orchestra and it’s all that plus unexpected duets and improvisations, with songs and orchestrations that won her a Grammy Nomination and the kind of playing that led to her 2012 tour with guitar legend Steve Vai.

In 2006 she received a Grammy Nomination for “Best Classical Crossover” Album.  In 2007 her public television special “Invention & Alchemy” appeared on PBS stations across the US. From 2008 – 2011 she wrote and performed one-woman shows — all with main characters who played harp: “Honey, I Shrunk the Harp,” “What the Hell are you doing in the Waiting Room for Heaven??” and “Electra’s Lyre.” In 2010 the world’s most cutting edge electric harp was named after her, “The DHC Light.” In 2012 she joined a rock band with guitar legend Steve Vai, touring nearly 100 shows in 3 months.  In 2013 her concerto “Soñando en Español” played alongside works by Bernstein and Gershwin,  she started an international online school for harpists called “Pluck University,” and was invited to Paraguay to represent the U.S. as a citizen cultural ambassador.

It’s fully electric, with a pickup on every string, so it can sound as angelic as a harp, or as driving as an electric guitar.  Named after her, the “DHC Light” — it’s now the top-selling electric harp in the world with waiting lists of nearly half-a-year.

She straps it on with a harness, plays in styles from Blues to Broadway to Flamenco, and uses a looper pedal to layer sounds that pad and prod her voice,  in spoken word, belting Broadway-style or lilting like a Celtic lullaby.

And as a soloist, she also brings her music to play with orchestras, or string quartets, acting troops and chamber ensembles – where she expands her shows  to interact and improvise with other musicians, actors or dancers.

Whether performing in symphony halls as a soloist with major orchestras or
playing intimate shows in jazz clubs and theaters nationwide, Deborah
Henson-Conant’s work is an exploration of possibilities – a transformation
that moves her audience out of the ordinary and into the extraordinary.
Music…Theatre…Comedy…Passion

Deborah Henson-Conant: a prolific composer, a revolutionary player and a performer of irrepressible spirit.

Henson-Conant has revolutionized her instrument. She’s brought vibrant passion and individuality to its sound — and in the process she herself has been transformed. Her work is an exploration of possibilities — a transformation that moves her audience out of the ordinary and into the extraordinary.

Described as a “combination of Leonard Bernstein, Steven Tyler and Xena the Warrior Princess” by the Boston Globe, Henson-Conant has opened for Ray Charles, been featured at the Edinburgh Fringe Festival, played the17,000-seat Bercy stadium in Paris, won awards from NEA and “Meet the Composer” and been featured on shows from NBC’s “Today” to NPR’s “Weekend Edition.”

She’s written more than 30 works for harp soloist and symphony orchestra, and performed them all; she’s composed musical comedies, song cycles and more than 200 songs.

Her playing ranges from full-out bluesy to heart-wrenching ballad. So if you’re one of those people who thinks all harp music is soothing and dreamy, think again. This is a feel-good, outside-the-box,bring-the-folks-you-love and celebrate-everything kind of show.