An incredible group of Boston University students is performing two song cycles of mine on May 1st in a concert titled “Mythic Women.”

This is a photo from the first rehearsal I attended, last Wednesday – when they played me one of the pieces, “Songs of the Pyre,” blew me away with their musicality and professionalism — and BU professor Barbara Poeschl-Edrich and I agreed on a date for public performance: Thu. May 1st, 2014 – a week before Mother’s Day. 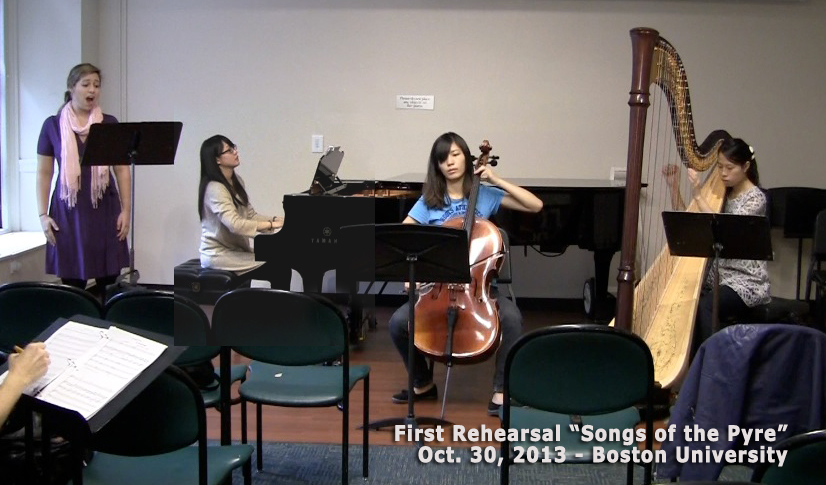 So here’s the low-down on the music:

Each piece is about an historical or mythical woman, each is for chamber ensemble and soprano.  Here’s the tentative program:

Please help us name the concert!

Below are some that we came up with – partly based on lyrics in some of the songs.  I’d love your ideas, suggestions.

And here’s the context in which the title will appear – meaning, we’ll also be using a subtitle along with the title, probably like this one – and we’re open to suggestions on that as well:

Here are some of the titles we considered before coming up with “Mythic Women”:

Thank you for your help in finding the concert title!

Songs of the Pyre
Women of Strength and Power
Behind the Mask
The Devil’s Bride
The Liberation of Madness
A Witch in Women’s Clothing
Ten woman — 5  Imaginary, 4 Performers, 1 Composer
Cycles of a Woman’s Mind
4 Women Sing 5 Women to Life

Yup!  It’s true, the final title wasn’t even on the original list, but generate itself because that’s simply what the concert is about.  Hope to see you at B.U. May 1st for the concert!