Christmas is coming up, but shortly after, the New Year Blues hits. It’s the anti-holiday — and Deborah Henson-Conant has the antidote.

She’s a GRAMMY®-Nominated recording artist, electric harpist, singer & songwriter – and her first show of 2014 is the annual “Lose your Blues” Show to help us all get through those first bleak weeks of January.

It’s on Sat. Jan. 11th at 8pm at TCAN (The Center for Arts in Natick, MA). This is a show that happens every year, and it always sells out. 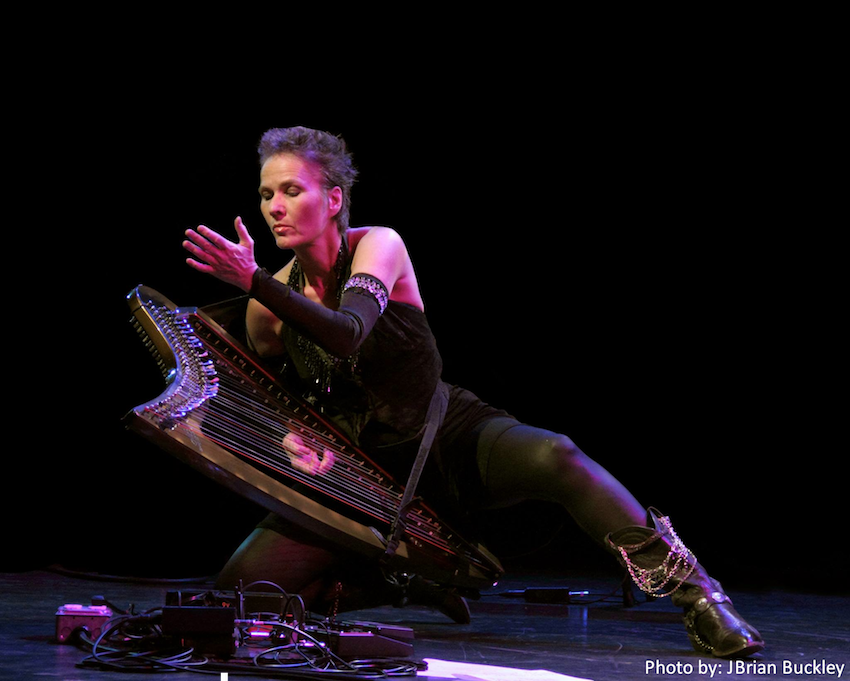 Imagine a harp shrunk to the size of a cross-bow – and played by a sleek, strong woman who strides onto stage with the swagger of a matador, straps on her instrument and plugs it in like a futuristic electric guitar. She sings and tells stories, while pulling sounds from the harp that you’d never expect to hear.

This woman is GRAMMY®-Nominated recording artist, composer and performer Deborah Henson-Conant (DHC)- and she plays the Blues. She’s toured with Rock legend Steve Vai and the renowned Boston Pops… but her forte is solo shows.

Most people think “Harp = Classical Music” – but thinking the harp is a ‘classical instrument’ is like thinking all dogs are poodles.  DHC straps on her ‘hip-harp’ and plays it as if it were a physical extension of the human body.

She sings, tells stories, and plays the harp – but not like any harp you’ve seen or heard before. It’s a 32-string, 11 lb carbon-fibre harp that was built in France using top racing bike technology.

It’s fully electric, with a pickup on every string, so it can sound as angelic as a harp, or as driving as an electric guitar.  Named after her, the “DHC Light” — is now the top-selling electric harp in the world with waiting lists of nearly half-a-year.

She straps it on with a harness, and uses a looper pedal to layer sounds that pad and prod her voice, in spoken word, belting Broadway-style or lilting like a Celtic lullaby.

Read more in her blog “So, what do I actually DO?”

Deborah Henson-Conant hit the jazz scene in the mid-80’s with her “Jazz Harp Trio.” She became a Boston-area jazz staple until her appearance with Charlie Rose led to a recording contract. She was the only woman instrumentalist on the Contemporary Jazz label GRP.  She toured the US and Europe with her quartet in the 90’s, when she also began working with the French harp firm, CAMAC, to develop an electric harp that could be strapped on like an electric guitar. For a decade she wrote solo and symphonic music for this new instrument.

In 2006 Henson-Conant received a Grammy Nomination for “Best Classical Crossover” Album for her all-original show with symphony orchestra.  In 2007 her public television special “Invention & Alchemy” appeared on PBS stations across the US. From 2008 – 2011 she wrote and performed one-woman shows — all with main characters who played harp – combining redoubtable history, fantasy and theatricality. In 2012, she joined the rock band of guitar legend Steve Vai, touring nearly 100 shows in 30 countries.  In 2013, her concerto “Soñando en Español” played alongside works by Bernstein and Gershwin, she started an international online school and was invited to South America to represent the U.S. as a citizen cultural ambassador to Paraguay.

In her spare time, Henson-Conant is a runner and a music blogger- with a Facebook following in the multi-thousands. She created and manages an international online learning community specifically for harp players worldwide. She lives in the Boston area with her husband and two black cats.