Harping the Boston Marathon for Parkinson’s

Boston-based, Grammy-nominated, electric harpist Deborah Henson-Conant (DHC) has found a unique way to ‘run’ the Boston Marathon with her harp and her husband … via livestream.

She’ll be performing a marathon-length Livestream concert through ConcertWindow.com that she’ll ‘run’ at the same time her husband is running the marathon. 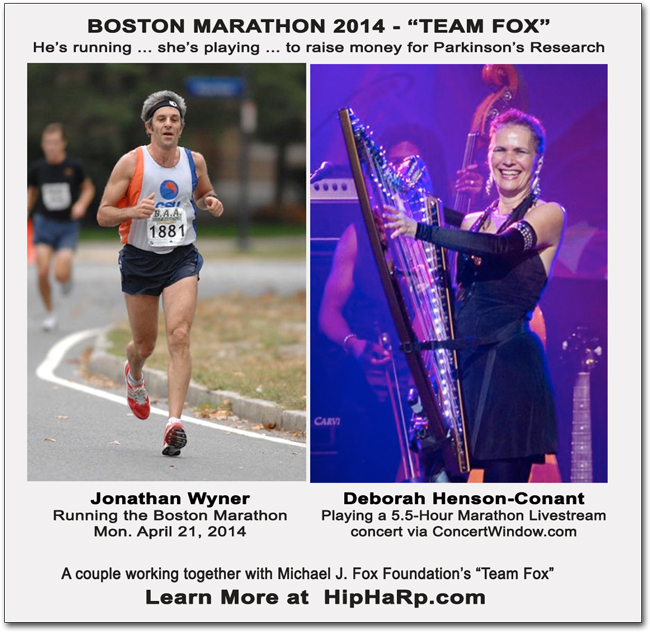 “It would take me about 5.5 hours to run the Marathon, so that’s how long the concert is.  And since I wanted to finish around the same time as my husband, I had to start a few hours early.”  Her concert starts at 9:30 AM on Monday, Apr. 21st, viewable via livestream anywhere in the world.

It’s all to raise money for Parkinson’s Research alongside “Team Fox” – Michael J. Fox Foundation’s grassroots community fundraising program.  She describes below, in her own words, what this project is all about.

Donate by buying a ticket to my “Marathon Monday” Livestream Show in any amount – 100% of all income from this show goes directly to the “Team Fox” Parkinson’s research fund, whether you can come to the show or not.

Or donate via my husband’s “Team Fox” Marathon page.

Either way, the money goes to the Michael J. Fox Foundation to fund research for Parkinson’s Disease, a disease that steals the physical dignity of each of its victims.

Running My Own Marathon

This is a story about how we can each ‘run for a cause’ in our own way.

On the anniversary of the 2013 Boston Marathon bombings, I hope this story can inspire non-running folks to find their own unique way to take part in events, and for causes that are important to them.

I believe strongly that a big part of life is sharing yourself and your unique gifts with other people. We all bring something different into this world, and we need to find ways share those with others.

Sometimes, it’s a challenge to know how to make a meaningful contribution to a situation, especially when we don’t fit the mold.  That’s when we have to get creative.  To find a way to bring our unique gifts into play.

My husband, Jonathan, is running The Boston Marathon April 21st for “Team Fox” in honor of his mother, Lila, who was diagnosed with Parkinson’s disease ( Check out his Team Fox page: http://bit.ly/JW-Marathon2014 ).

People all over the world raise money with “Team Fox” (Michael J. Fox Foundation’s grassroots community fundraising program) — all of them working together to raise money for Parkinson’s research – and to ultimately find a cure.  It’s a great organization and they make it easy to get involved.

My Contribution: A Music Marathon

I run nearly every day as part of my basic physical maintenance as a musician — and I would love to be able to run alongside my husband to support his mother in this race. But I’m just not that fast, and I haven’t trained for a Marathon.

So I’m ‘running’ my own marathon that still lets me end with him, lets me raise money for the same cause and lasts the same amount of time it would take me to actually run the marathon course: it’s a Marathon Livestream concert for 5.5 hours.

(I’ll be in my studio, like you see here – and you’ll be able to watch it on your computer, like you see on the computer in the image) 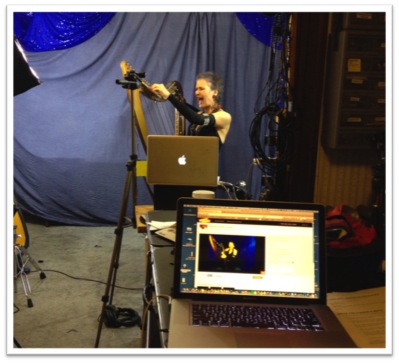 Why 5.5 hours? That’s how long it would take me to run the Marathon at the speed I run.

I’ll need all the same things that the marathon runners will have: Gatorade, snacks, comfortable shoes, and a port-o-potty (mine is usually just called the bathroom).

I’ll be performing this concert at the same time that Jonathan is actually running, and one of my favorite things about this is that I have a special number I can call to track his progress and let people know how he is doing.  People who watch and donate to my Marathon concert can use the chat stream in ConcertWindow.com to chat with me and each other, make requests and give news about their own favorite runners.

And another other cool thing?  I’ve been training my whole life for this!

Giving Back Through Harp

I’ve spent decades reinventing the harp into a portable instrument I can actually wear, and move around with – thanks to the CAMAC Harp company – and my playing style has often been called “athletic.” I love that this Livestream concert allows me to use that instrument to ‘run for a cause’ in my own way, using my own unique gifts and resources to ‘virtually’ run beside my husband in this race.

My tech partner, ConcertWindow.com, has created a way for viewers all over the world to see my Marathon Music concert and has turned their livestream-concert-platform into a funding platform for this event.

People ‘buy a ticket’ to the show for whatever amount they want, starting at $1.  Then they can watch the show anywhere in the world with internet access.  During the show they can chat with other viewers, or with me, through the chat window, donate more through the ‘tip jar’ and download cuts from my upcoming album through links I’ll post throughout the event.

And every penny that comes in will go to the Michael J Fox foundation for Parkinson’s research.

What Kind of Music Will You Hear?

I’ve always loved exploring divergent styles to help me find new sounds on my instrument, so like  all my shows, the set list includes Blues, Flamenco, Latin, Folk and the kind of quirky songs I’m known for, like “Sous Chef Blues” and “Watermelon Boogie” – and the inevitable stories that accompany them.

My personal goal is to play as many different pieces as possible and focus on improvisation to really make the most of the 5.5 hour concert time, and I’ve been poring over old setlists and creating a huge list of tunes – from originals to jazz standards – that I focus on during the marathon concert

How You Can Get Involved

There are two ways you can directly support Jonathan’s and my Parkinson’s fundraising projects and in each case, the money goes to the Michael J. Fox “Team Fox” fund for Parkinson’s Research.

Buy a ticket for my Marathon Music concert (pay what you want): http://bit.ly/MarathonMusicTix

I want to give a special thanks to Concert Window.com for offering to donate every cent from this concert to this special cause. I also want to thank “Team Fox” for their tireless efforts to research cures for a disease that has stolen the dignity from each of its victims. I’m honored to be part of research into a cure in any way.

For more artist info or to schedule an interview, contact: