Monday’s Harp-a-thon was  … WOW.   Thanks to the Michael J. Fox Foundation’s and through my husband, Jonathan’s Boston-Marathon run –  we raised over $5,000 for Parkinsons Research on Monday. (And you can still donate here if you missed it) 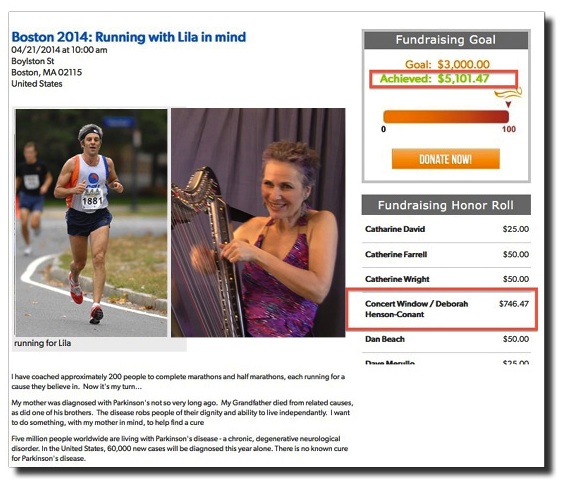 It was exciting – I performed, Jonathan ran … we reached and surpassed our goal … and then suddenly that seemed like so little.

When I hear about billionaires donating millions of dollars to causes or politicians, $5000 sounds like such a tiny drop in a huge ocean.

And if it were only money, it might be little.

But what I learned by doing this is that the exchange of funds is really the center of a relationship. And fundraising can facilitate those relationships when it’s set up well.

And those relationships are about human connection.

Well, Monday of this week was the Boston Marathon – and Boston, where I live, is completely focused on it.  The marathon takes place on a state holiday, “Patriot’s Day,” so many people are off work.

My husband was running the marathon to raise money for Parkinson’s research, a disease his mother has and I was ‘running’ a 5.5-hour online “Harp-athon” via ConcertWindow.com to raise money for the same fund.  My concert started at 9:30AM, Jonathan’s race began around 11:30, we tracked his run, and I ended the concert at the moment he passed the finish line.

The online concert part happened very last-minute. It was a ‘crazy idea’ I had to put on an online fundraising concert. I ran it past the ConcertWindow.com people and they said, “Sure! And we’ll donate our percent to the cause, too, so 100% of all the money that comes in will go to this fundraiser.”  And boom – it was suddenly happening.

Our emotional motivation was Lila, Jonathan’s mother, who has Parkinson’s.  And these two organizations, Michael J. Fox Foundation’s Team Fox and ConcertWindow.com allowed us to connect directly with people so we could raise money for this research that’s so important to us.

Why did we do it?

Everyone in our family feels the helplessness of fighting this disease, Parkinson’s, that steals the physical dignity of the people it strikes and disconnects us from this person we love so much.  Being able to engage in any positive way, no matter how small, in something that might help, lifted us momentarily from that feeling of helplessness and gave us a small way to connect.

One thing I realized was that, while the money itself is essential, when organizations like the Fox Foundation, and ConcertWindow.com make it possible for us to raise money in ways that connects us to individual people – the people who came to the Online Concert, the people who donated to the campaign – the fundraising becomes a focus for human connection, and a motivation for personal challenge.

Does it really help?

Does what we did change the condition of people with Parkinson’s? Does it change our personal helplessness to fight it?

Not right this minute, no.

But it changes our connection to each other and to the people we love who are fighting it.

It’s just an act of love.