“Classical Gas” was a huge hit when I was a kid and it was a BIG DEAL because it was one of the rare instrumental hits of all time.  It was one of the things that put a seed in my head:  a classical instrument doesn’t have to be classical.  And that seed has blossomed throughout my life.

So when I had the chance to meet “Classical Gas” composer/guitarist Mason Williams  during a tour, I jumped at it and, as it turns out, we became friends and he and his wife Karen and I bonded over music, cats, sushi and humor.

Visiting them on my next trip West, I shyly hinted it might be cool to play “Classical Gas” together and the next thing I knew we were up ‘til all hours working out the arrangement.  Mason played on my show as a special guest — and made my night, my week, my year.

Here we are, a little bleary-eyed after an evening playing.  Note his lopsided haircut … there’s an explanation for that in the man’s own words at the end of this post (no comment on my own hair). 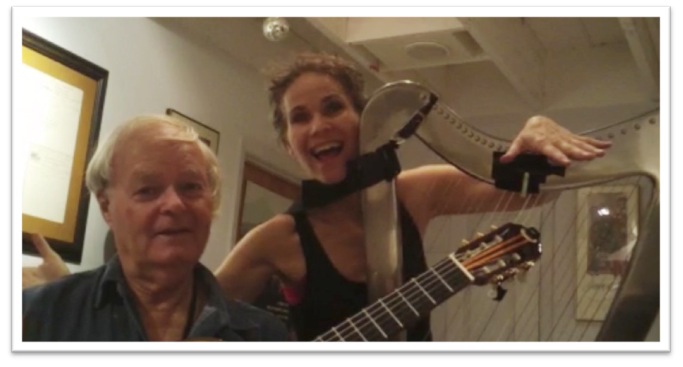 So, today I got an email from Mason with a very cool list of  “Classical Gas” renditions and it was so fun to watch these that I wanted to share them.

If  you like seeing the way different people do the same thing (like I do), check these out – it’s especially fun to watch them in order and see how each one kind of plays off the one before it.

Here’s what Mason wrote me:

There are several videos of “Classical Gas” that have come to my attention.  There may well be some I don’t even know about but here a few to check out if you’re interested.

1) Tommy Emmanuel in China.  The audience sang along. https://www.youtube.com/watch?v=jabnOm0WzIs

Classical Gas is at the end of the Beatles medley.  George Harrison was really interested in Classical Gas.  I spent a day with  him at Apple Corps Headquarters.  I was with Andy Williams and his wife Claudine, Derek Taylor was there as well.  So, for me, being in a Beatles medley is not that far-fetched.

[DHC Note: I didn’t know who Tommy Emmanuel was – I was missing out!! Check out around 8:00 on this video – wow! Talk about playing a crowd!]

2) According to Tommy, Classical Gas is his most popular video and gets on average 5000 hits a day.

3) Tommy’s version of Classical Gas was featured on “American Dad” with Roger the alien playing it with only three fingers!    They did a remarkable job of copying Tommy’s moves on the guitar.

4) Jason Carter just played a great version of it and did a wonderful video as well.  Check it out!

5) Gabriella Quevedo is also playing Tommy’s arrangement.  Amazing for a 17 year old.  I’ll never be that good, but then again I’ll never be a gifted seventeen year old girl.

6) Classical Gas on cello played as though it were a guitar.

8) Classical Gas: Me and Deborah Henson-Conant (lever harp) Live Eugene March 7, 2012.  I had my haircut asymmetrical in support of the Occupy Wall Street.  The side you can’t see was the short side.  I said, “This is for the people who can’t afford a whole haircut.”

[DHC Note: Cool, eh?  Do you have a favorite version of Classical Gas?  I’d love to hear it played on Ukulele!!!]

Thanks to WhatBettyKnows.com we now have not only a version of  Classical Gas on Ukulele by SanfordAndSong: https://www.youtube.com/watch?v=eff82NeIit8