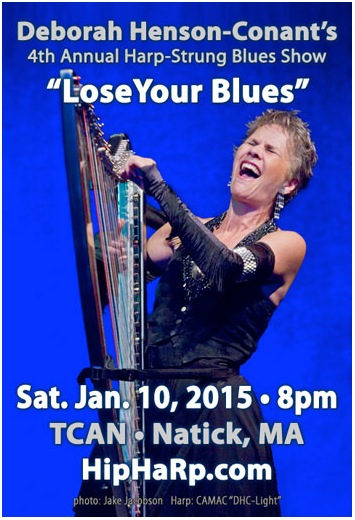 Every year I perform my Annual “Lose Your Blues” concert at TCAN (The Center for Arts in Natick) – this year it’s on Sat. Jan. 10th.  The impetus is to take the worst weekend in the year – the weekend right after New Years and see just how much fun I can have with it.

I love taking something that’s considered limited, or icky or challenging, and see what it offers.  And I really wanted an opportunity to get together with a great audience during I time when I could easily lapse into depression and turn it into a celebration.

I also know that feel happiest when I’m learning and creating something, and when I have a chance to share it. And my annual “Lose Your Blues” show in the converted Firehouse of TCAN does all that.

Creatively, it gives me a focus for exploring all the ways I can play Blues on the harp, which is my focus for January 2015: playing the Blues AND teaching my online course BLUES-HarpStyle, which starts three days after my “Lose Your Blues” show.

So, let me stop right here and say that if “Blues Harp” means “harmonica” to you, please immediately recalibrate your Instrumental Capability Settings.

By “Harp” I mean a well-strung instrument some claim we’ll all play sooner or later.  I simply decided not to wait. I also had my harp shrunk to the size of a crossbow, and I wear it like a ship wears its masthead, only mine’s strapped on with a harness.

Limitation never exists in a vaccuum but only in relationship to what we’ve decided is normal or ‘unlimited.’ So any time I explore a limited environment it’s really about deconstructing my own mental constructs, unlocking perceptual dimensions, dismantling the limitations I hold in my mind.

Maximum potential from a limited source

Professor Carl Rahkonen at IUP, where I recently did a collaborative project with the music department, told me there’s an old Finnish folk idea of “Getting the maximum potential from a limited instrument.”

The Finns should know a lot about this.  The Kantele, their traditional harp-like instrument, would be considered by most people to have severe limitations – way more limited than the harp – and Dr. Rahkonen wrote his dissertation on the Kantele.

The practice of resourcefulness has always fascinated me.  It never occurred to me that it might be hereditary.  Not that I’m Finnish.  But half my family came from Sweden, which shares a border, a lot of latitude and a little longitude with Finland. That may also be why I’m drawn towards turning a cold winter night into a celebration.

Which leads me back to THE BLUES – and my January “BLUES HarpStyle” course and “Lose Your Blues” show – because THE BLUES is a musical form that could be considered severely limited.  It’s traditionally 12-bars long (no longer, no shorter), and follows a specific set of harmonies, in a specific order, using only three chords.  You can’t get a whole lot more limited than that musically.

Yet it is one of the richest, most creative musical forms there is. Because a limitation is simply where you START.  In fact, sometimes the riches begin when limitation provides a focus and a fountain for creativity, even if the source of that fountain is the frustration of “Why doesn’t this do what I want it to do???”

Once you crack that open, it unleashes huge potential.

Because there’s no tradition of Blues on my instrument, I’ve never had to break away from the traditional “My Baby Done Left Me” Blues.

Once I grasped the simple underlying structure of the Blues it became a way to express  anything – I sing Blues about Canine Cultural Exchange Programs, the delights of the Watermelon, what to call the graceful act of disengaging the manual door locks on old cars, what a modern-day Sancha Panza might sing to her Doña Quixota.

Can you combine the 12-bars Blues with the impressionism of Claude Debussy? Yes, I call that tune “Debluessy.”  Can you sing a Blues about food preparation and love? YES! It’s called, the “Sous Chef Blues” which is, according to a friend of mine, the most kid-friendly racy song he’s ever heard.

Can you create a Latin-flavored Blues? A Blues about meeting Elvis in Heaven?  A Blues about never wanting to playing classical music as a kid?? Yes!  Yes!  YES!  (And you can hear those Blues in my January 10th show – AND you can create Blues like that in my BLUESHarpStyle.com course)

Because the Blues is a starting place for endless exploration and experimentation. Last year, when I held an impromptu Q&A before the second half of the show, an audience member asked how the levers work on the harp and instead of describing it, I invited him right up on stage to play some Blues with me even though he’d never touched a harp before.

So you never know where limitation will take you.

If you’re in the Boston area, join me in Natick on Jan. 10 for “Lose Your Blues” – buy your tickets now.

If you’re a harp player anywhere in the world, it’s time you brought the Blues to your instrument.  Check out my new video mini-tutorial and join my January BLUES HarpStyle course then come with jam with me in BLUES Harp-Style!