To Cardiff – with Harps – via Time-Space Travel

Into the Time-Space Zone Machine

Last weekend I was up early on Sunday for a soundcheck from my studio because it was already afternoon in Wales and I was about to be existing in two Time-Space Zones simultaneously.

In Cardiff Wales, Elen Vining, who masterminded the CAMAC Harp Weekend 2015 was in a big room full of harps with Shelley Fairplay, a featured harpist and coach for the weekend – and they were sound checking their end.

In Germany, Claudia Jung, a livestream facilitator was on the line ready to help with technical issues. And we were about to connect it all up! 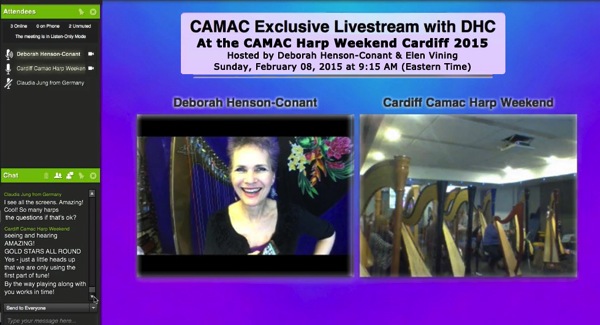 (You can see us all on the upper left side of the image above under “Attendees”) and you can see the two rooms – the two ends of the feed – in the two images below.   On the lower left you’ll see comments that came in during the event.)

An hour later I’d be teaching a live workshop at the festival in Wales to 30 harpists.

Only I’d be in Boston.  Where it was snowing big time (see my “Snow” post for pics)

I didn’t need to board a plane, or get a taxi to the airport.  I was in my own studio. And I was beginning a thrilling new chapter in a decades-long journey to find ways to coach and teach to a world-wide musical community that’s incredibly spread-out geographically.

There are a lot of us harp players out there – but we don’t traditionally travel in herds.  So getting a group of harp players together with a visiting master coach is a rarity.

Two years ago I started creating an online school from my own studio.  Now hundreds of harpists from dozens of countries around the world take guided courses with me (you can see my next upcoming course, “Baroque Flamenco Bootcamp” here)

But this was a first – combining the live workshop experience with the livestream experience. And doing it with CAMAC Harps made perfect sense.  After all, they’re my harp company, the visionary builders who created my signature harp, the CAMAC “DHC-Light” (yes, those are my initials and it’s named after me!)

You can link to a video on the CAMAC Harps blog from this image of Shelley and me talking via webcams about the weekend if you want to know what you missed. 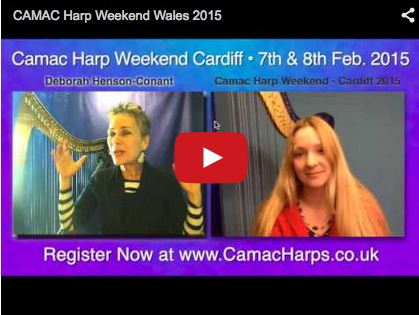 And it was thrilling and felt very connected.

Even with the inevitable tech problems, with Shelley on the other end tag-teaming, each technical challenge heightened the experience that this was a new, never-done-before experience, and each one offered an alternate solution using different, personal technology and made the whole experience more personal and interactive.

When we we discovered an audio issue we needed a few minutes to troubleshoot, I set up a playing exercise and asked Shelley to lead the group playing on it as we worked on the problem – so suddenly, instead of watching me on the big screen, they were working in-person with Shelley and using the ‘down-time’ to explore what I’d just showed them.

When the audio feed on the Wales end went down during the Q&A session, Shelley walked around the room with her iPad (she and I were also connected via FaceTime) fielding and sharing questions which I answered on the big screen.

And for our final farewell, Shelley simply passed the iPad from hand-to-hand and each person said a quick hello-and-goodbye face to face with me – which was soooo much fun!!

Now that’s something we’ll add every time. It turned from a glitch into a finesse.

And will there be other times? Yup!  That’s what we’re working on now!

>> Get on the “First to Know” List for future teaching, coaching and mentorship events <<