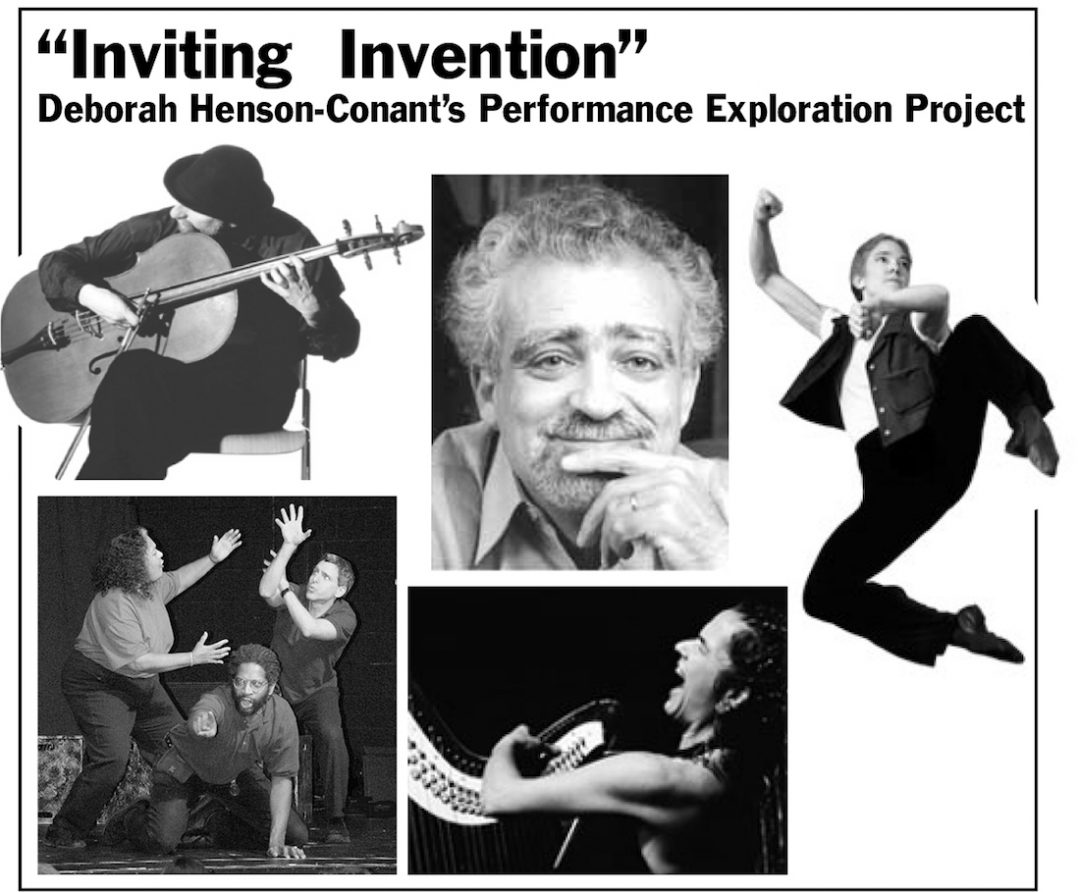 “Inviting Invention” is a performance exploration I originally presented with my co-host Jonathan Wyner and invited guests from diverse fields.

Each show combines performance, interview and onstage improvisation, inviting the audience into the worlds of creative invention and the alchemy of collaboration. Example: how is being a nuclear physicist like being a musician, and how can the two possibly create something together – right now – in front of an audience?

The concept originated with a six-week series at the Regent Theatre in Arlington, MA in 2007 and was then invited to the Cambridge Science Festival.

Each show was structured somewhat like a game show: Producer Jonathan Wyner described it this way:

“In the first half of each show, Henson-Conant and her guest present their solo work. In the second half, they embark on a collaborative experiment. If time permits, the audience is invited for a Q & A. It gives audiences a chance to interact with Deborah and her guests in a way that just isn’t possible when you have audiences of 2000, like we had when we filmed the DVD.”

Our special guest would then present a basic 20-minute overview of their work, followed by a 20-minute segment where I’d share my own work.   We’d the invite the audience to propose an experiment or a question they wanted us to explore together after the intermission.

During intermission, the guest and I would discuss how we might explore or illustrate what the audience proposed and after intermission we did the experiment, followed by a longer Q&A session with the audience.

Some of the experiments included:

Why did we create “Inviting Invention”?

Producer Jonathan Wyner and I had spent 2004-2007 completely immersed in an artistically and technically demanding project: I’d been given a major private grant to produce a broadcast-quality CD & DVD of my original music with full symphony orchestra.

That was a pinnacle life project – a chance to share my orchestral work at the highest level of professional production. It was a dream come true – and  it was also extremely stressful. Everything had to be perfect. We had a huge film crew, high-definition film equipment, an orchestra of 80 musicians,an Emmy-Award-Winning director, a Grammy-Winning engineer, one of the most creative conductors in the US. Everything was riding on our work.

Add a 2007 Grammy Nomination for the CD and a nationwide PBS debut for the video into the mix, and we were exhausted when it was over.  So, for a follow-up project, I wanted to just expand creatively and play.

I’ve always been interested in science and ideas, and in how seemingly disparate concepts seem to create a new window for looking at life when you look at them together, so we envisioned the ‘Inviting Invention’ Exploration Series as an opportunity to allow diverse creative minds a chance to invent something new and completely imperfect in front of a live audience, yet within the safety net of exploration.

Emphasis on the idea of ‘imperfect’ and on the spirit of experimentation and collaboration. I also wanted a chance to simply ‘play’ on stage with people I’ve wanted to work with for years – and after the intensity of the last three years, I just really need to play – in every sense of the word!

The original series was very successful and the project was invited to the Cambridge Science Festival.