Learn more about Summer of Improv 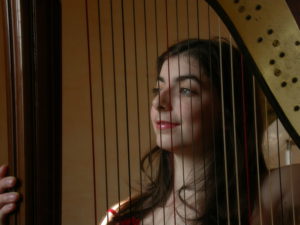 After that I entered the Erasmushogeschool Brussel in Belgium where I passed my Master 2 of music, speciality harp in Jana Boukova’s class.  I played during 2 years with the Sonderjyllands Symphoniorkester in Denmark, as well in the Lille National Orchestra, the Czech National Symphony Orchestra, and the Opera of Nice in France.  When I had the opportunity to play on “Stars de Demain”, I really wanted to play my favorite piece of music : Baroque-Flamenco by Deborah  Henson-Conant.

While I am teaching the harp in Saint-Saturnin les Avignon in France, I would love to do concerts in other countries and would like to find a manager who would coach me.

DESCRIBE THE FOLLOWING PERFORMANCE OF ‘BAROQUE FLAMENCO’ INCLUDING WHERE & WHEN IT WAS:   I sent a video to Rolando Villazon who made a selected it among other videos for a TV program called “Stars de Demain”.  I have been invited to play in Berlin, Germany in the Arte studio with 3 other musicians.  The video can also been seen on the Arte website. The video was produced on February, 14, 2016.

Craziness, sensitivity, séduction, contrasts, and fantasy (all I like).

2.  What do people say when you play this piece?

People feel a lot of different emotions : some cry, which is for me a huge present!
Others tell me that I have a strong personality, but I really think this is due to this wonderful piece of music.  Some people are amazed to see all the different ways the harp can be played!

I saw the video on YouTube from Deborah Henson-Conant and I was so amazed by this fantastic piece that I really wanted to play it.

4.  What does this piece add to your repertoire (and/or your life) that you didn’t have before?

I wanted to enlarge my musical repertoire, basically only classical until now, and I was looking for different styles of music.

I wanted to enlarge my repertoire, was looking for different musical styles besides classical #BaroqueFlamenco Click To Tweet

Try to play it with dreads 😉

I would love to meet the composer to know more about her personality and understand the piece even more.