Blues is a Lingua Franca 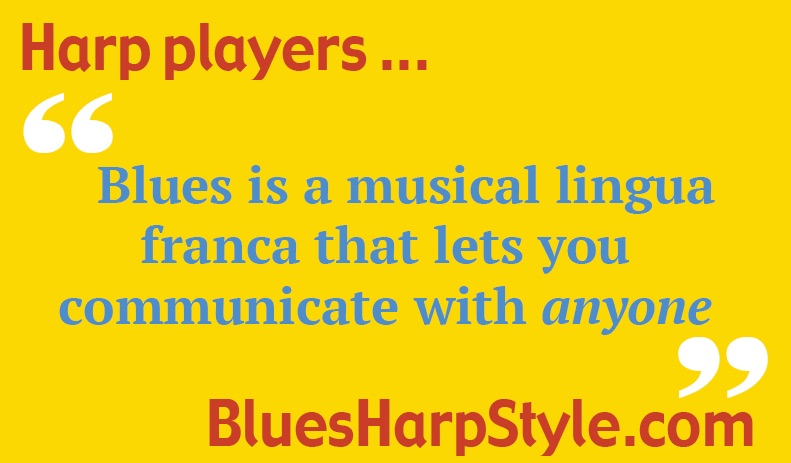 What if there was a language you could learn that let you speak – and listen –  fluently with anyone in the world, regardless of their language?

a language that is adopted as a common language between speakers whose native languages are different.”

That’s what you get – as a musician – when you know how to play the Blues.  A 12-Bar Blues is a 12-Bar Blues.  If you know the key, then even without speaking, you can launch into any Blues and musicians all over the world know how to join in.

When I had the chance to play guitar-harp duets with cartoonist Gary Larsen, we started out with a Blues – because it’s something we both knew we would know. When I need to ‘play out’ the end of the TV or radio interview, I often turn to Blues because it’s easy, fun, recognizable as an upbeat style – and because I can fade it out, or keep going as long as I need to.

When I need to 'play out' the end of a media interview, I often use Blues. Click To Tweet

It’s an unexpected sound on the harp, it can also be surprisingly easy to get started playing Blues on the harp once you know how it works – and once you do, it opens up a whole new world of improvisation and ensemble playing. Are you an instant expert?  Absolutely not – but you can almost instantly be playing.

That’s why I give a 6-Week “Blues HarpStyle” course every year at HipHarpAcademy.com — a course that teaches harpists the basic game of the Blues – and how to take it as far as they want.

Many harpists take the class over and over – because each time, they experience it – and play it – on a deeper level.Many repeat the class to take Blues to deeper and deeper levels Click To Tweet

If you play the harp,  jump into Blues HarpStyle with more than 100 other harp players of all levels from around the world.   It’s powerful to learn with others who play your instrument, musicians willing to ask the questions you’re sometimes embarrassed to ask yourself, or questions you hadn’t even thought of yet – from colleagues who cheer you on when you ask questions, or admit doubt yourself, or try something new.  And I’m there leading the class, and answering questions.

It depends on who you are how you see the Blues.  If you’re purely a listener, or someone who’s drawn to style, it’s a genre of music.

But if you’re a composer – like I am – or an instrumentalist whose training is primarily classical — or anyone who wants to PLAY the Blues – it’s a specific 12-Bar harmonic progression with a range of characteristics that include the swing rhythm (a way of ‘skipping’ the beat instead of ‘walking’ it), bent notes and dominant 7th chords.

And you don’t have to know what any of that means in order to start having fun playing the Blues.

Join me in Blues HarpStyle, the super-fun Spring class at HipHarpAcademy.com – learn more and register now at BluesHarpStyle.com 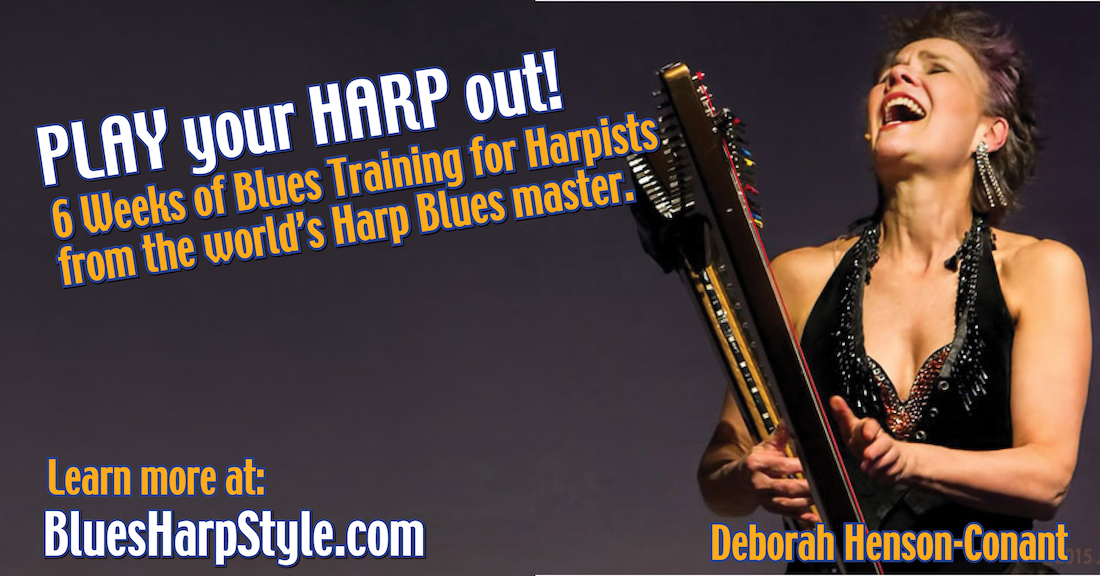