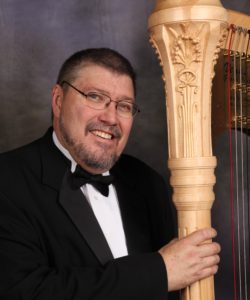 BRIEF BIO or DESCRIPTION OF WHAT YOU DO:  David M. Ice began his harp studies in 1978, and has studied with Adine Bradley, Mildred Dilling, Marjorie Call-Salzedo, and David Watkins.

A film editor by trade (his Hollywood credits include over 65 feature films and six years of the TV series M*A*S*H), David started harp lessons in his mid-twenties as a relaxation therapy. He never intended to play the harp professionally, but fate has taken him in this direction.

He is currently principal harp with the Musica Nova Orchestra, North Valley Symphony, and the Prescott Pops Orchestra. He has performed with the Phoenix Symphony, Opera El Paso, Symphony of the West Valley, Flagstaff Symphony, Prescott Chamber Orchestra, Arizona Opera, Arizona Theater Company and many shows with TheaterWorks. David has been a guest lecturer at the Royal College of Music in London as well as in Ireland, Australia, and all over the United States. In addition to his harp work David also continues to work in videotape editing and production. As far as he can tell, he may be the only person who has simultaneously been a Hollywood film editor and a professional harpist.

He lives in Glendale, Arizona with his four dachshunds, “Coney Island Hot Dog”, “CC” (short for Chili Cheese Dog), “Ootsie” (short for Onions On The Side) and “Delaney.”

DESCRIBE THE FOLLOWING PERFORMANCE OF ‘BAROQUE FLAMENCO’ INCLUDING WHERE & WHEN IT WAS:   Feb. 12, 2017 dress rehearsal (excerpt.) This is the only video I have, which is very incomplete. Verde Valley Sinfonietta. I was NOT amplified in any way! (DHC Note: Wow! You definitely carried over the orchestra — other folks I encourage you to use amplification with orchestra – though this looks like it’s a nice small-sized ensemble for this piece)

FOR VIEWERS: This video is just a small excerpt of archival footage – just to get a sense of the performance – but read on for David’s interview questions below – to see how an orchestral audience will respond to this piece!

2.  What do people say when you play this piece? Do you have favorite memories of people’s reactions to it?

During rehearsals, my harp mover told me “the violins are all staring at you–you can tell they’re trying to figure out how you are making those sounds come out of the harp, and they are probably a little bit jealous!”

Probably my favorite memories are peoples’ reactions. This piece is NOT what they are expecting to hear. They aren’t expecting the humor, the “fire”, and the passion. And they are not expecting the harp to sound like this! It’s great–probably the most common comment was “I had no idea the harp could do that!”

Another reaction–I was immediately approached by people to play for their events as a soloist! Later I got emails from the orchestra manager who told me “we are getting nothing but rave reviews” about my part of the concert. My ONLY regret was what I was not allowed to record it. This orchestra was very, very fussy about any sort of recording, even archival.

I also knew that it would not be so technically difficult as to cause me sleepless nights or stage fright. In fact, the scariest thing for me was walking out on stage! I’ve had several back surgeries, and my biggest fear was that somehow pain would register on my face. I guess the adrenaline compensated for that, and once I sat down to play, it was like a picnic on the beach!

4.  What does this piece add to your repertoire that you didn’t have before?

I love the fact that it makes people sit up and pay attention! Not that I’m an egotist, but I’ve seen people sort of roll their eyes and “settle in” when they expect what I call “sewing machine music” from the harp. From the very first strums, people are intrigued! And the Cadenza! WOW! It really gives people an appreciation for the harp — and hopefully, they will want to hear more.

I’m my own most severe critic, and I can honestly say this boosted my own confidence several fold. I truly “nailed” the piece and once I got to the last dozen bars or so, I realized internally that I had done it–and had every reason to be proud. And I was sorry it was ending!! The high from that experience was, trust me, MUCH needed at that point in my life. And I’d play this piece with an orchestra in a heartbeat if the opportunity should arise again.

COUNT! Things can be deceptively easy looking–but suddenly you are surrounded by living musicians, trumpets who stand up (yes!!!) and other distractions, so no matter how well you *think* you know this (or any other solo work), you really have to go back and religiously count the beats. For me, I would play looking up at an imaginary conductor and try to mentally follow his stick and not get wrapped up in the strings and my own “head space.”

And about a week before the concert, I went back and “deconstructed” each sequence and “re-learned” things so that I would not be playing from rote or any sort of “oh, I don’t need to worry about that part, I know it.” Ironically, it’s often the easiest parts that you will mess up in rehearsal because you assume that won’t be a problem. Suddenly, you will discover you have NO IDEA what beat you or on, or even what the time signature is! (And I say this after nearly 35 years of orchestra experience!) So, in other words, ASSUME NOTHING. Practice the whole notes and counting as much as you would the trickiest fingerings!

A NOTE FROM DHC:  We now have a piano-reduction of the orchestral score so you’ll have a chance to play (and count!) the whole piece together with an accompanist — check out the Concerto Soloist’s version with Piano Reduction here.

I didn’t get a chance to work one-on-one with Deborah, but I’ve corresponded with her and had spent time with her before. I knew she would want me to “make it my own” and not be a slave to “tradition” or “it’s ALWAYS done this way.” I did add a couple of touches of my own that worked very well, and that is VERY freeing. By that, I mean I don’t have an imaginary teacher glaring down at me, saying “that tempo is totally wrong” or “that fingering is simply not satisfactory” or “your interpretation is wrong!” It’s the difference (for me) between restaurant food and “home cooking”–the ingredients are more or less the same, but it’s the technique and execution that make home cooking so much more appealing.

I just want to thank Deborah for making this wonderful piece available to harpists worldwide. I was able to take this piece on (in addition to 6 other orchestra jobs) without losing my mind. BAROQUE FLAMENCO is so well thought out it’s a breeze to play and such fun! I never once approached it as “oh geez, I gotta get that piece nailed down.” If anything, the other gigs were keeping me from the joy of playing it!

And the orchestrations are marvelous!