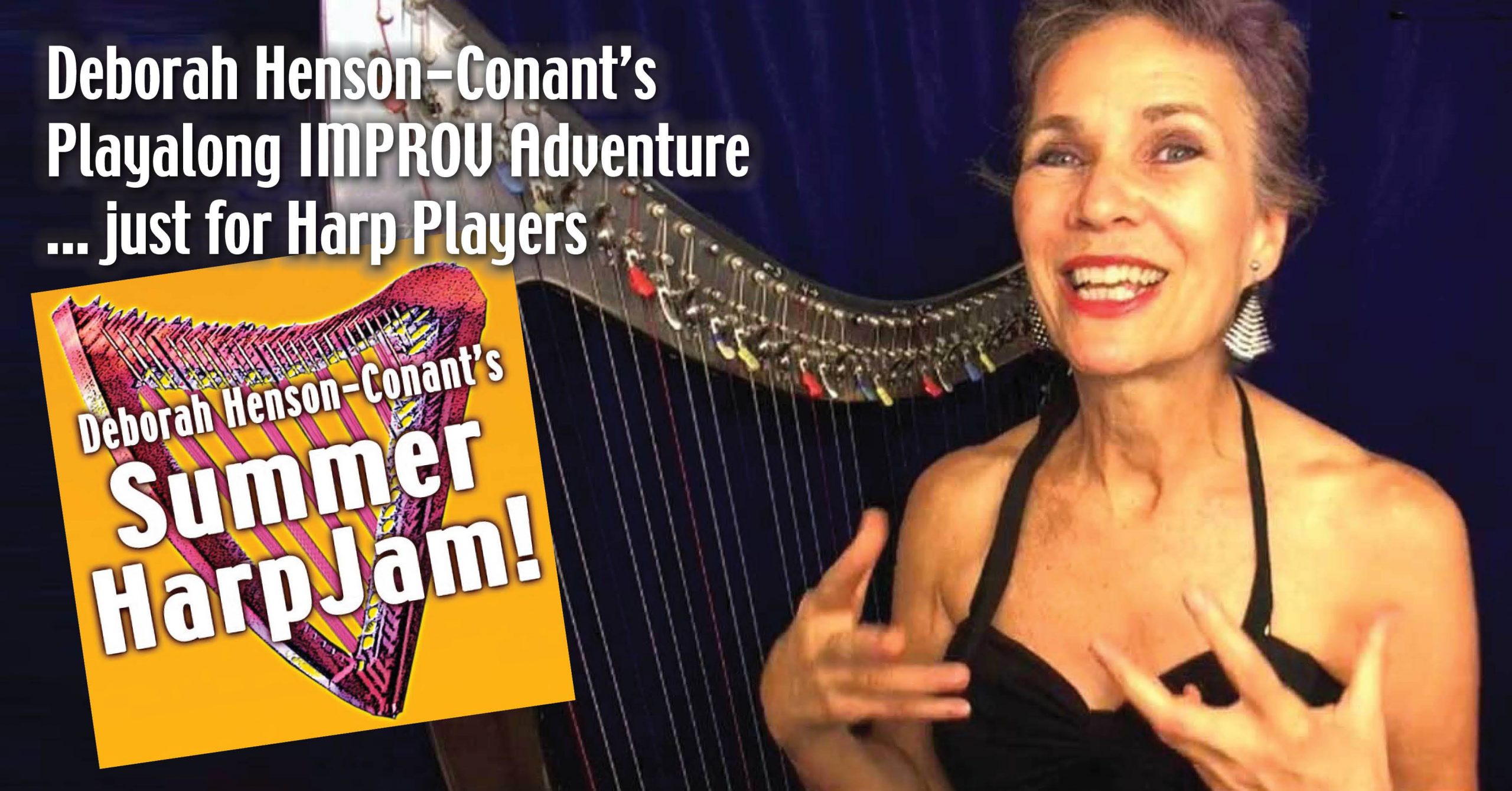 “Summer Harp Jam” is my 8-Week Playalong Improv Adventure that’s exclusively for harp players – lever or pedal, from fledgling to professional – and gives you a treasure chest of jams, vamps and play-alongs that strengthen your improvisation and rhythm skills while you’re having FUN!

Summer Harp Jam is all about PLAY

“Play gives children a chance to practice what they are learning.” -Mr. Rogers (and that goes double for adults!)

“The creation of something new is not accomplished by the intellect but by the play instinct.” -Carl Jung

THIS IS WHAT EVERYONE WANTS! When I ask people why they want to learn to improvise they say it’s because they want to be able to just sit down and PLAY with freedom. So I built a whole 6-week course ALL based on playing-along – so that by the end you’ll be able to just sit down and jam – whether you’re playing in a wild rhythm jam, or a quiet responsive improv at a bedside.

THIS PROGRAM IS THE MISSING LINK! I’ve been searching for a way to teach rhythm and melodic improv, and to give people a way to practice it over and over – because, while rhythm and improv are both a part of all my online courses, I didn’t have a course with a FOCUS on those elements. When started building “Summer Harp Jam” I realized it’s the perfect way to learn melodic improv AND rhythms at the same time. Only instead of ‘learning,’ you’ll just jump in and play along with them, having fun from the beginning and get more and more comfortable the more you do it … by PLAYING!

YOU LEARN TO PLAY TO YOUR STRENGTHS! These jams play to the strength of OUR instrument! So many times when we want to play with other musicians – or when they show us cool patterns we can play on our own — they choose something that’s easy on their instrument but hard on ours! You sit there trying to play along and feeling like a fool! The jams in THIS program are created so you can play to the strengths of the HARP instead of trying to fit into jam patterns that are easy for OTHER instruments (Ha! Take that all you fast chromatic instruments!)

IT’S SOOOOO MUCH FUN! Did I mention It’s really, really FUN — because you get to play ALONG with videos and audio files, so the program materials are like having a virtual friend to play with! And when you play those jams with other people  that virtual friend becomes a real one!

“SUMMER HARP JAM” MAKES YOU STRONGER: Like any good adventure, the games, sport and environment make you stronger and healthier. And it’s the same with Summer Harp Jam: it strengthens your hands, your coordination, your ear, and it also strengthens you as a LEADER with other musicians because YOU’LL be able to say “Let’s Jam ” and actually describe what you’ll all be jamming on!

SPONTANEOUS JAMS! All the jams, progressions and sequences in this course can be played either solo (just you on your instrument) or with others – and once you know a bunch of jams, you can ‘set them up’ any time you’re around other people. Some of the jams are simple enough that you can just tell people the scale you’re using and they’ll be able to join right in for a spontaneous musical experience (and some can be played with non-musicians!)

SECRET JAM SOCIETY! OK, it’s not really ‘secret’ but one of the cool things about learning the specific jams in this program is that you’ll have a shared “jam repertoire” with anyone else in the program. So if you meet at a harp festival, or rolling your harps down the street, you can create a spontaneous ensemble! Because you’ll know the same jams, when one of you starts playing, and the others will know what to do – even if you’ve never met before!!!! (It’s like having a game that everyone knows how to play so they don’t even need to speak the same language)

YOU GET RHYTHM!! By the end of the course, you’ll be playing Latin rhythms, swing rhythms, at least one odd-meter rhythm (like 5/4 – the rhythm of “Take Five”) – and you’ll be improvising in all those rhythms even if you have no idea how to ‘read’ them on the page. How? You’ll be playing along with the jam-tracks – so you don’t have to get it perfect the first time! You just jump in the water of the playalong track and flail around the first time, and the more you do it, the more comfortable you get. And in the weekly Q&A sessions you can ask for specific help if you’re still having trouble with them.

YOU CONNECT TO NEW FRIENDS AROUND THE WORLD! This may sound crazy, but when I was in Paraguay in 2014 I saw a concert with about 50 harps. The audience loved the concert and when the master harpist ended the concert, the audience demanded more. It was clear the group hadn’t prepared for more music, but the master sat down and played a short melody.

Then he turned to the 50 harps and they were all smiling and nodding. He started playing again and every one of the 50 harps joined in — and I realized that this was a tune they all knew, they’d all learned and they all could play it together – it was like a GAME that everyone knew the rules to, so as soon as someone ‘called the game’ everyone could just start playing.

When I created “Summer Harp Jam” I kept imagining a moment where several harp players meet by accident with their harps – on the street or at a harp festival — and because they know the same jams, they can just sit down and start playing together — really PLAYING — without music, without agenda — like a wonderful game. That’s what made me most determined to create the course. I just kept seeing this possibility for a ‘lingua franca’ that made it possible for people to spontaneously play together!

YOU CAN USE THESE JAMS IN RESPONSIVE-PLAYING SITUATIONS – One of the things you’ll learn is how to style music differently. For example, it’s easy to turn the Pacelbel Canon into a Samba by ‘styling’ it with a Latin rhythm. This is just one of the things you’ll learn to do – and that includes learning to re-style them for more meditative or responsive playing so you can use them in therapeutic situations.

I’M YOUR JAMMIN’ ADVENTURE GUIDE! You could take all the jam files you’ll get and just work on them on your own, and you’d be getting sooooo much by doing that – but each week we’ll be PLAYING them live together in online sessions where you get to play back to me what I play – so you learn by doing.  These sessions are live so you can ask questions and get CLARITY on any part of the jam your don’t understand — or ask for ways to expand it or use it  – so you can have even more fun playing these musical games.

Summer Harp Jam starts JULY 15th 2021!
Sign up NOW and then JAM with ME all summer!