In 2008 I arranged “Baroque Flamenco” for other harpists to play, and instead of just making a single arrangement, I created 3 arrangements: one for beginners, one for intermediate players, and the concert version I play, myself, for advanced players.  All the versions are playable on concert harp, and the beginning & intermediate versions are also playable on the lever harp (also called “Folk Harp” or “Celtic Harp.”  You can see both concerts harps and lever harps in the photo below) 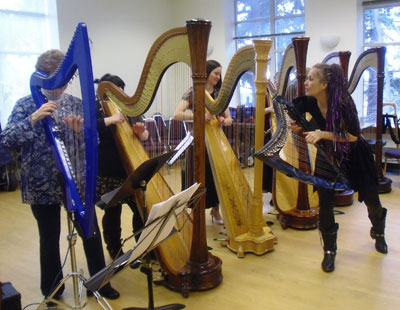 So now harpists all over the world are playing this piece.  But to really play the piece – to bring it alive — you need to not just play the notes, but also play the “character” of the piece — and that’s the kind of thing you can’t pass on via written notes.

To REALLY play the piece - bring it alive, you need to not just play the notes, but also play the CHARACTER of the piece Click To Tweet

So I created an online course specifically for learning how to express the character of the piece  — which is both the simplest, and the hardest part of the music.

To work on that, we use a simplified version of the piece, so that players on all levels, from beginning to advance, can work together at the same time.  Interestingly, it’s often the less advanced players who have an easier time connecting with the ‘character’ of the piece, so working together in a multi-level environment is useful to everyone.

By  the end of the course, everyone knows how to ‘get this piece across’ to an audience, regardless of their skill level, and they can then take that understanding and apply it to whatever level of the piece they’re working on. They also get my tips on practice techniques for Baroque Flamenco and ideas for developing their own unique performances of the piece.

I love sharing this in this online course because as a composer I have a limited language through just written notes – but when I can be with you, and show you exactly what I mean, musically, you’re getting all the music, not just the notes.  You get to virtually look over my shoulder.  You get to experience the passion of the piece – you get the living music and then you become part of the life of that piece.