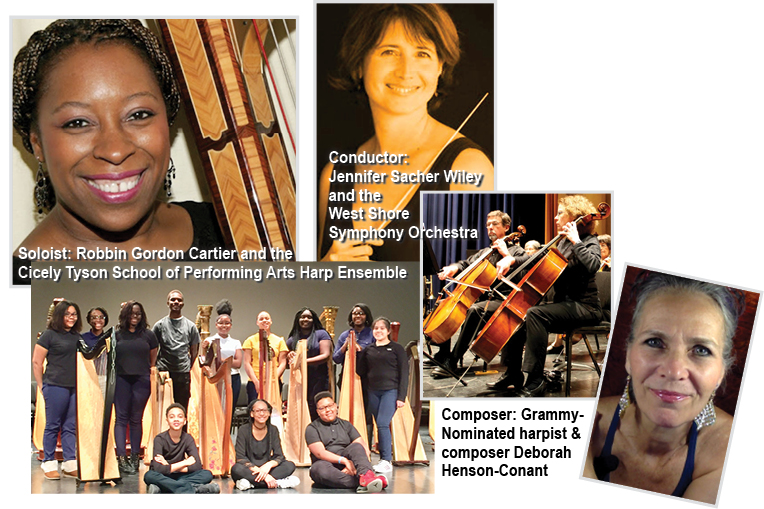 Sometimes education and performance can come together in wonderful ways.  When harp soloist and educator Robbin Gordon-Cartier and composer/performer Deborah Henson-Conant (“DHC”) decided to work on a project together, they decided a few things were of paramount importance:

When harp soloist Robbin Gordon-Cartier & Deborah Henson-Conant (DHC) decided to work on a project together, 3 things were of paramount importance Click To Tweet

When a Conductor Entered the Picture it all Came Together

All those elements came together in early 2018 when a third woman contacted Gordon-Cartier on Facebook.  Jennifer Sacher Wiley, conductor of the West Shore Symphony Orchestra, invited Gordon-Cartier to perform as a soloist in their November 2018 concert.

There was one caveat: Robbin wanted to run a concerto contest at Cicely Tyson School, giving the 4 top players the chance to play on stage with her and the West Shore Symphony Orchestra in Concert. And she wanted all her students to learn the music, whether they’d be playing on stage or not.

For the West Shore Symphony orchestra that was great. Their mission is to perform traditional and new works “with youthful exuberance” – so if 4 of Robbin’s students joined her onstage that would fit even more perfectly with the orchestra’s mission – assuming 5 harp players would fit on the stage.

The bigger challenge was that Gordon-Cartier would have to reinvent these harp concertos so the featured solo harp part could be played with an ensemble, expanding it so the four ensemble-harpists could shadow and embellish what Gordon-Cartier herself was playing as the primary soloist.

Robbin immediately called Henson-Conant and together, they chose to feature 3 very different pieces in the program: pieces that could stand alone or be used together as a suite, pieces that were of varied technical ability so that ALL the kids in the ensemble could learn them, even if they weren’t playing on the concert – and pieces that had been performed successfully by other symphony orchestras – so they were tried and true.

That left the education portion – and, as it turned out – that was easy.

Henson-Conant has an online school where she teaches harpists worldwide how to arrange, improvise, perform — and how to play her own music. She has an entire online program based on breaking apart “Baroque Flamenco”, the most challenging of the three pieces. That means that the teaching of this these pieces was already outlined in a series of videos. If Gordon-Cartier could bring those videos into the classroom, the students could learn directly from the composer.

If Gordon-Cartier could bring DHC’s teaching videos into the classroom, the students could learn directly from the composer. Click To Tweet

So, during the past 2 months, Henson-Conant’s “Baroque Flamenco Beyond the Page”  filled the Smart-Board at Cicely Tyson School of Performing Arts – where the students sit at their harps instead of at desks. And online at Hip Harp Academy, adult harpists from all around the world were learning to play the same piece and following the progress of the kids.

What’s so great about this project?

This project empowers these young soloists because they get a chance to be on stage playing new music with proven audience appeal, written by a living composer. They get to be part of collaborating with a symphony orchestra and they get to work under the wing of a professional soloist.  That gives them experience of working as a soloist, but doesn’t throw them into a high-pressure performance situation all alone,  and gives them a role model to follow as they develop their own careers.

Eventually they’ll all likely play this piece as soloists with symphony orchestra, but by performing it first within the supporting ensemble, they get to learn the piece, experience how it works with symphony and learn from the professional soloist before they ever take on the high-pressure role of a symphony soloist.

This project empowers young soloists because they get a chance to be on stage playing new music written by a living composer. Click To Tweet

Because all the students are learning various versions of the piece – some very simple versions, some advanced – they’re all learning the basics of a piece they may someday have a chance to perform with symphony.

The pieces themselves are challenging – but within these student’s technical reach – and it’s music written specifically for their instrument – which can be a huge challenge to find when it comes to harp music.

Finally, this is an incredible opportunity for symphony audiences to experience something truly different and to enjoy music that includes young talent outside of the tense environments of student recitals or talent competitions.

And this is just the beginning.  The long-term plan for this project is for Gordon-Cartier to develop more of Henson-Conant’s works for harp and orchestra and bring this project to other harp ensembles, connecting players to their local symphonies, developing community on the symphony stage – and training future symphony soloists – or simply giving more performers the chance to experience the joy of playing with symphony orchestra – and the chance for more audiences to experience this instrument in new and exciting ways.

A peak into the classroom!

Robbin is sending me updates from the classroom including pictures & videos! Click on the links below to see more!

There is also a FREE family concert “Moods in Music” sponsored by G B Music Foundation, on Saturday, November 17th at 9:30AM.