the love comes back

The love comes back  … that’s what I found out this week.

Last week for Valentine’s Day I decided – last-minute – to broadcast a Salon Concert from my studio land LiveStream on Facebook. Love songs — jazz standards, originals. I planned to just play what I felt at the moment.

I was also on a mission to create a special valentine for my aunt, and worked out with my family to sing “My Funny Valentine” – a cover of the classic standard by Richard Rodgers and Lorenz Hart.  That was the one song I knew I’d play in the show.

The next day I posted “My Funny Valentine” on YouTube, sent my aunt the link and shared it on Facebook. Mission accomplished. Valentine’s day successfully concluded.

Or so I thought …

But I hadn’t thought about responses.  I’m not a big Facebook user so I didn’t even notice a response to that live-stream concert until yesterday, when I stumbled on my own feed and discovered this post by harpist Therese Honey. 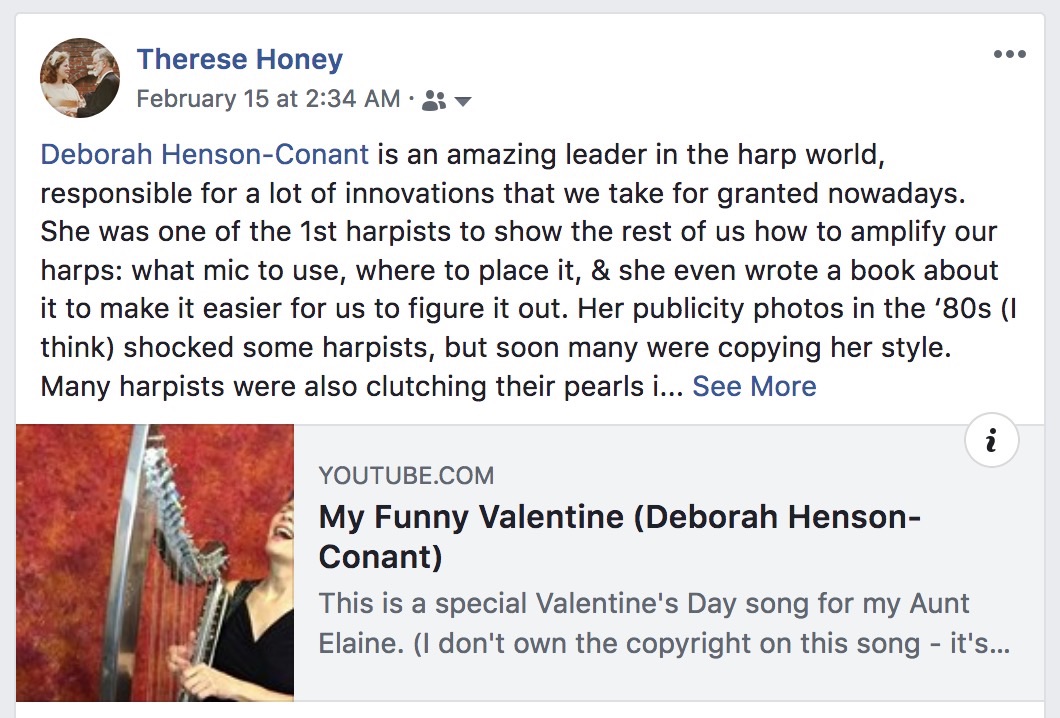 “Deborah Henson-Conant is an amazing leader in the harp world …

Deborah Henson-Conant is an amazing leader in the harp world, responsible for a lot of innovations that we take for granted nowadays.

She was one of the 1st harpists to show the rest of us how to amplify our harps: what mic to use, where to place it, & she even wrote a book about it to make it easier for us to figure it out.

Her publicity photos in the ‘80s (I think) shocked some harpists, but soon many were copying her style. Many harpists were also clutching their pearls in shock when she performed in black leather.

Since she was touring so much and needed a portable harp, one of the harp manufacturers collaborated with her to create the harp she is using in this video; now it is a very popular model used around the world [and named after her, the “DHC” harp]. She could stand, move around, and dance in performance, something no one else was doing.

When I was starting to play gigs in the ‘70s many harpists played standards on pedal harp, but no one dreamed about playing this music on lever harp.

Deborah was one of the leaders showing us how to make it work. She also showed us how to play slap bass and other new techniques. And yet, here she is, performing this beautiful song, without any fireworks, making it look easy, like only a master can. (Therese Honey)

… and yet here she is, performing this beautiful song, without any fireworks…”

That’s what really hit me in Therese’s post.  Love really comes down to that: “without any fireworks.” To the simplest human connection.  I can strum up a storm, innovate until my brain is a decade ahead of my body – but love is about connection. Not achievement, not accomplishment.

Until we make that connection, it can’t return.

Sometimes it takes a lifetime of frantic achievement to realize that the love you have to give was right there all the time – in the simplest and most natural thing you do.

Which, as it turns out … can be the hardest thing to connect with … and share … without the fireworks.

So that’s why I’m starting my new program for harp players, “Sing & Play the Harp” – with the same 3 simple chords that liberated my life when I was 7.  And that’s why it’s really a course about love. About expressing love, sharing love.

However you express love – put it out there … and let the love come back.

And thank you so much, Therese, and everyone who shares their experience with me – for the light your words shed on what life, love and music is really all about.