I’m so happy to see you! 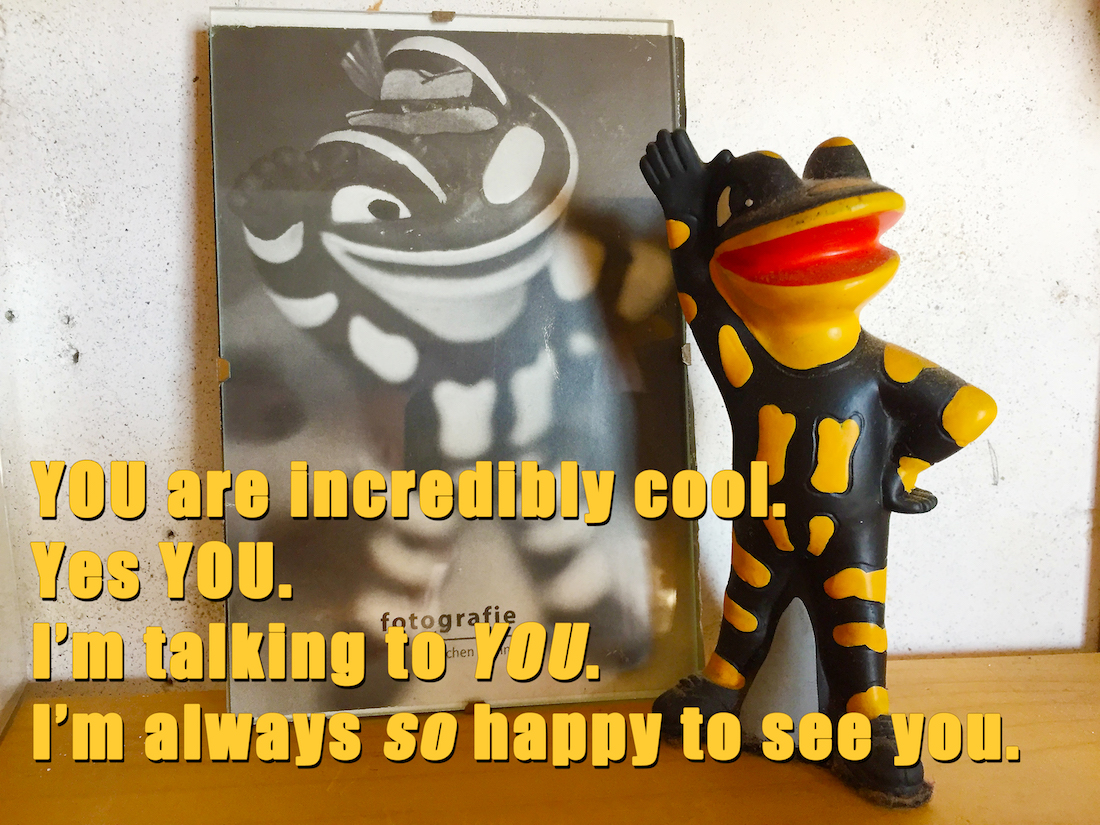 I was scrolling through LinkedIn, trying to be social when it hit me:

I was seeing poses. Like animals, frozen in a pecking order, flaring out feathers, puffing out chests.  And LinkedIn isn’t nearly as intense with that as other social media. And here’s me taking a LinkedIn class on Lynda.com to try to get better at doing that.

And I thought: Does that really feel good?

And I realized: no, it doesn’t. Not like this was news to me.

I thought – how can I make a message that would help me feel connected if I saw it? Me personally – and then maybe one other person. That’s enough.

I went to my graphics program, and immediately noticed I was pulled by a font that ‘looked inspirational’ – and thought NO. Stop with the ‘styling’ – what’s the message?

The message is: YOU are cool. Whatever YOU have made of your life. Whatever you thought you should have made of that life, YOU are here. YOU held on to the rope that life threw you and you’re still holding on. Are you stylish? Are you ‘important’? Are you a thought-leader, a trend-setter? I don’t care. You’re here. End of story. Beginning of story. You’re here and I’m so freakin’ happy you are.

So I made the image above. Despite all the voices in my head that said … well, I don’t have to tell you what they said – they probably talk to you, too.

The image is Lurchi. He’s the mascot for the old Salamander shoe company in Germany.

Here’s what he is for me and why there’s a tiny shrine to him in my house:

Years ago, touring in Germany, with a band of guys, I was the leader and the only woman. They were all grumpy (and so was I). They were all having a tough time with their girlfriends and I seemed to represent that tension for them.

We loved playing music together, but the hours of driving each day were tedious and sometimes tortuous. The word “Stau” is German for traffic. And you don’t know traffic ’til you’ve experienced “stau”, which is such a congealed traffic jam that people get out of their cars and picnic on the side of the Autobahn.

I started feelng like everyone hated me, and getting into the van each day was like stepping into a misery club with me as the mascot.

Then I found Lurchi at an old-things store, and he became my beacon. He lived in the crevice of the van ceiling, right above the back seat door, next to where I sat. He greeted me every day and every time I looked at him I truly felt like someone was happy to see me.

And that’s a beautiful feeling.  Someone is happy to see you. Someone is really happy you’re here.

That someone is me.