Meet Sally – Helping to Reinvent an Orchestra on Solo Harp

“I let go of my perfection obsession and accepted imperfect completion.” Sally Walstrum 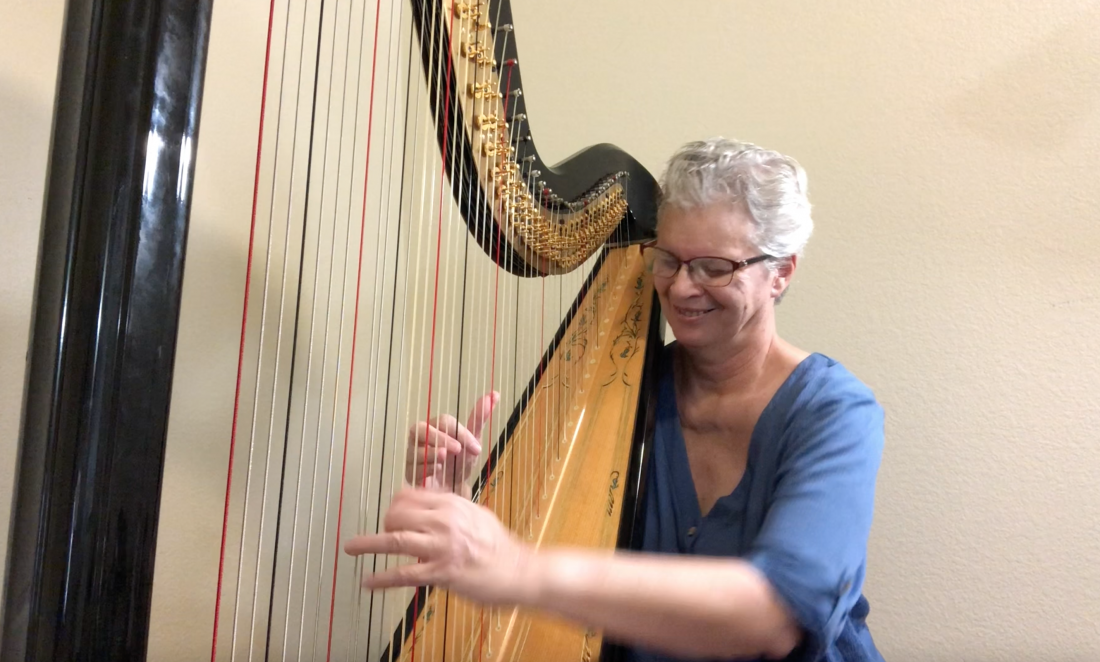 The Birth of a new solo harp piece: Merceditas

I started playing harp as a child and had a strictly classical background. And I mean ‘strict.’ There came a point where the harp no longer gave me joy, so I changed gears and worked as a librarian for 30 years until my recent retirement.

Several years ago, I started playing harp again after a decades-long hiatus and joined Hip Harp Academy. For a year I worked with Deborah intensely in her “Harness Your Muse” program and created my first solo show, which I presented at … wait for it … the library!

I’m now enjoying using more and more of the tools taught at the Academy to free myself from the page, arrange songs, improvise, experiment with musical styles, and this summer …

My Academy Summer Project takes me back to my classical roots, somewhat. Together with fellow Academy member Verena, I’ve been working with DHC to adapt her concerto for harp and orchestra, Soñando en Español, to be playable on solo harp.

This is the second movement, Merceditas.

A note from Deborah here:

When you hear Sally play this, it sounds deceptively ‘playable.’  In general, it is – difficult, but playable –  but there are two sections that Verena, Sally and I worked on for several months to reinvent for solo harp. Here’s why:

I originally composed the piece as a double-harp concerto: TWO harps and orchestra.  In 2005 I consolidated the two harps into a single harp part – which was already tricky – but it worked because I had the orchestra to back me up.

I honestly didn’t think it was possible to create the piece as a solo harp work (though I’d heard rumors that harpist Eleanor Turner had done it) —  but this video is proof!

Our next goal is to publish the new solo version of all 3 movements in 2022.  That will allow harpists to play the entire concerto on solo harp, all 3 movements:

So, enjoy the birth of a new arrangement for solo harp! I’m amazed and thrilled that it’s now a possibility.

“The challenge here was to take a written score, yet put something of myself into it. I was able to move out of my comfort zone to adjust the harp part to play it as a solo.”  Sally Walstrum

For my Final-Beginning project this summer I just shared a 3-minute segment of the piece that includes the trickiest parts: the ones I had to reinvent.  Here’s an excerpt where you can hear those: at 0:11 to 0:41 and at 1:28 to 2:23.

Here’s a short Interview with Sally about creating this project:

Describe the project – what do you call it?

I’ve been working with DHC & Verena to take DHC’s “Merceditas” that was scored for harp & orchestra and play it as harp solo. I recorded the entire movement but also edited the video down to a snippet that contains the two sections where the melody was originally played by the orchestra but adapted to be played on the harp.

What principles from “Blues: Harp-Style” or from chats did you use to develop, perform, and record this project – and how did they play a part in your process?

I’m not sure I used principles from the specific summer classes though I did use principles I picked up from the Academy in general. Mainly, I tried to let go of my perfection obsession and accept imperfect completion. I can do that in a live performance but have a difficult time with that when recording.

What did it take for you to be able to play what you did – both logistically and emotionally.

I had to alter what was in the written score, which was difficult for me as a strict, classically trained player.

What freedoms and blocks within yourself did you connect with (or struggle with) in the process?

I’m not comfortable notating music and convinced myself that I could not possibly do it. However, I realized I needed to write down what I had played to perverse my adaptions. I forced myself to just sit down and notate my ideas. It was a struggle, but I managed to get something on paper.

What challenges did you meet while connecting with your own freedom of expression in this project?

I think the challenge was to take a written score yet put something of myself into it while still playing much of what was on the page. I’m very comfortable playing from a score but was able to move out of my comfort zone to adjust the harp part to play the melody where the ensemble originally had done so.

What other parts of your life were impacted by what you learned in this class, and how?

I’m realizing that I have something to share and am trying to cope with of my fear of doing so. I managed to record the entire movement in one take, which is difficult for me in a video since I keep wanting to stop and “fix” things. I was able to push through, accept the mistakes and make a completion.

What were your personal “Ahas”

I can achieve much more than I think is possible.

Is there anything else you want people to know when they watch your video?

I want to thank DHC for sharing this beautiful piece and working with me & Verena to adapt it to play as a solo.

Do YOU play the harp?

How would you use the skills of improv and performance to achieve your own creative dreams?

Learn more about Hip Harp Academy and how it can give you the classes, coaching and community to support you in changing your life and sharing your gifts with the world.

It’s all about CONNECTION … not perfection.

JOIN ME FOR A FREE CREATIVITY TRAINING 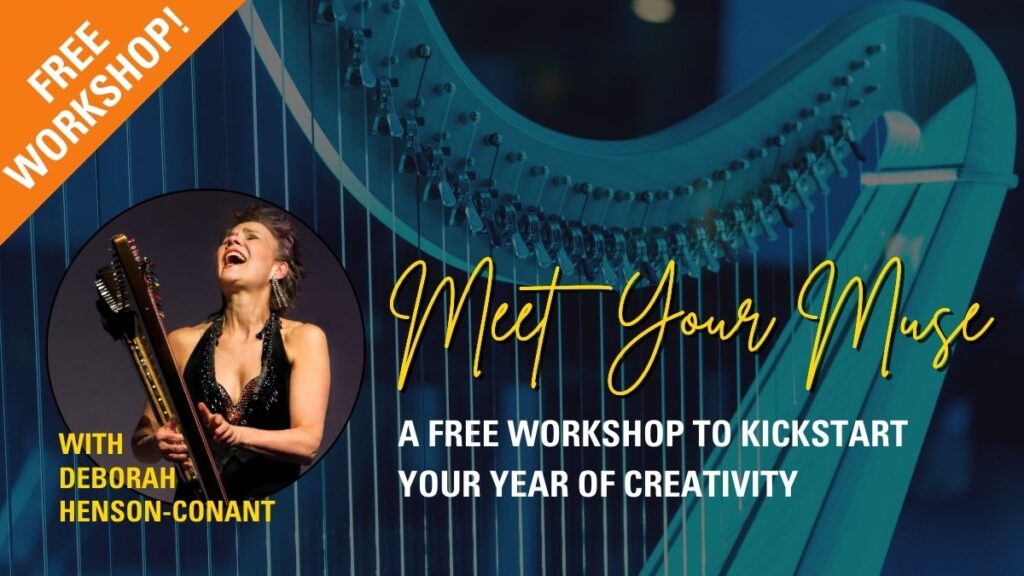 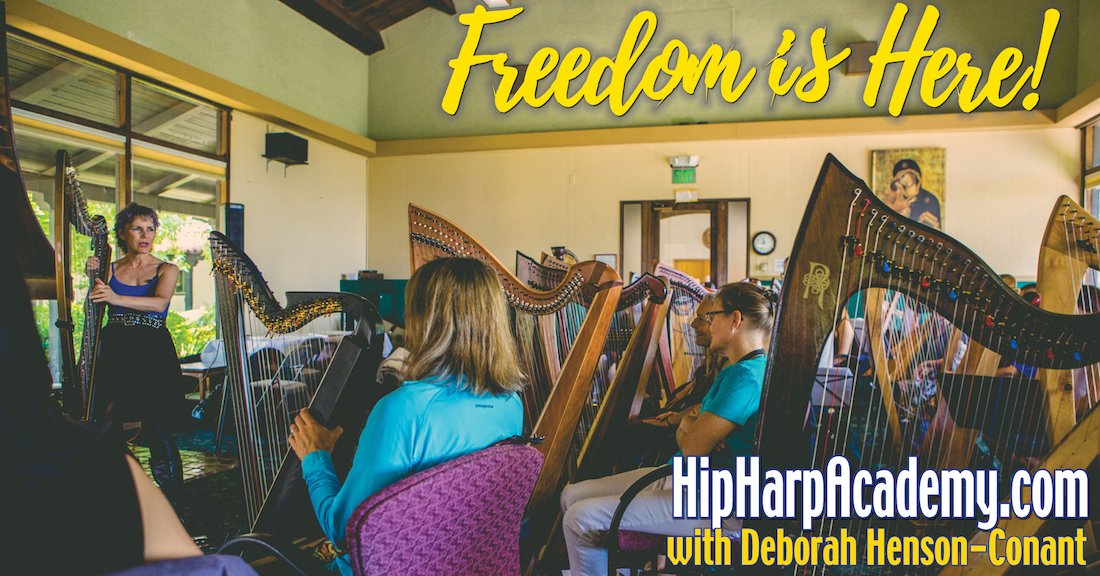