Back to the Future in Sydney, Australia – “Old Jazz Days” Raises Questions

Just before I left for Sydney, Australia two weeks ago, I got an email from Sabine Meijers & Brenda Dor-Groot of the JazzHarpFoundation about a phrase they saw in my tour schedule:

‘I’ll be weilding my 32-string electric body harp in an early evening set reminiscent of my old jazz days.’

I used the phrase to describe my Sydney Opera House Bar performance at the World Harp Congress last Friday night and it triggered questions for Sabine & Brenda, both of whom have known my work for years, watched me change and were intrigued about how last Friday’s performance relates to my past – and to my current activities and goals.

They asked some great questions!  And below are the answers as they appeared in the JazzHarp Foundation Newsletter  (to get that newsletter, which includes lots of cool interviews and news sign up here )

What is it exactly that you call ‘your old jazz days’?

The biggest difference in ‘my old jazz days’ was the venues. The Opera House Bar in Sydney is more like one of those ‘clubs’ — and these days I generally play in theaters or concert halls.

The venue makes a difference in the repertoire: In this case, because The Opera House Bar is a popular evening spot, I know that at least some of the audience won’t be there to ‘see me’ which is more like the old days versus the shows I perform now — where 100% of the audience is there to see me.

That also means I’ll pick the material differently and be prepared for a less singlarly-focused audience – so, for example, I’ll choose material that I know I can deeply focus on even if a some audience members might be distracting.

I’ll focus on Blues, upbeat tunes with a lot of rhythm and energy and probably some standards like “Take Five” — things people can enjoy and follow, even if the environment may be a little distracting. 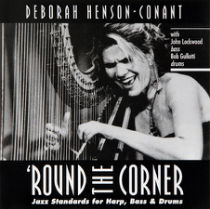 [Here’s the “Old Me” – on the cover of my 1985 straight-ahead  jazz album ‘Round the Corner’ – you can hear sample cuts at CDBaby.

Why did you diverge from it?

I decided I wanted to move away from doing ‘sets’ and really focus on creating ‘shows’ which are much more diverse musically, and which often have a theatrical aspect to them.

It’s not that a show is ‘better’ than a jazz set, it’s just that it’s much more ‘me,’ because my own musical focus blends both musical genres (like Blues, Flamenco, World, cabaret) and performance genres (like music, theater, movement, humor).

I just need that broader pallette to express my own broader musical passion — and I grew up seeing a theater stage as ‘home’ versus seeing a jazz club as ‘home.’

So this will be fun in a different way. It’ll let me stretch out the way I used to,  in my jazz-focused days versus the ways I stretch out now.  It’s just a different stretch.

Does this occasion mean you’re kind of getting back to it?

I was about to say, “I’m not getting back to it or getting away from it” and then realized that the online courses I’ve been creating and teaching in the last 2 years, ARE leading me back to a more pure jazz expression, as I work towards creating a jazz-harp curriculum for other harp players.

I was very lucky in the way I learned jazz, and it taught me a level of fluency that allowed me to integrate a lot of other styles into it and eventually to develop my own unique-to-me style, and I want my curriculum to take other harpists that same route. (And by the way, harpists interested in being on the “First to Know” list for those courses should follow this link http://bit.ly/1st2No)

I hadn’t actually realized the affect of developing that curriculum on my own playing – but it IS leading me back as well as leading me further out! So thanks for that great question!

Is there anything else we can expect in the near future that refers to ‘your old jazz days’?

Very much so! UK harpist, Shelley Fairplay , offered to come to Boston this Fall to be the guinnea-pig for the jazz-harp curriculum I’m developing. That means that Beta-test-versions of the some of the courses may be available as early as November.

So if people are interested in being on the Beta-test team for those courses should make sure to sign up on the First to Know link above.

My big focus right now is on setting up structures and programs to pass on what I’ve learned in the past 30 years, so while I’m very focused on my own composing and playing, it’s all filtered through my goal of passing it on through publications and learning programs, which is why I’m so happy to be collaborating with you (the JazzHarp Foundation), with CAMAC harps (my partners in developing the “DHC Light” harp) and with other festivals around the world that all help me pass this on!

As for the Opera Bar show – that’s just going to be pure fun!

[And that was the end of the interview ….]

First of all, I had a great time, and soooo wish I had photos from the tiny stage.  I could see people hanging off the bridge above me, people at tables below me and people standing, singing and dancing in front of me.  It was fun, crazy and loud.

I also remembered one of big differences between my old jazz days and the theaters I play in now … and it really made me laugh.  How could I have forgotten??? 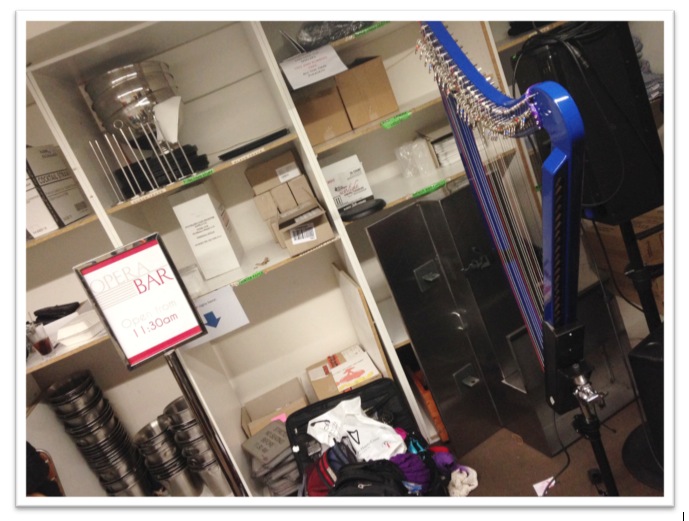 Here’s my palatial, cushy dressing room at the Sydney Opera Bar, which I shared with table storage, security guys, linens, vacuum cleaner and possibly some wildlife (there were dire signs about NOT storing nut-based snacks in the room).  And here’s me IN the dressingroom. 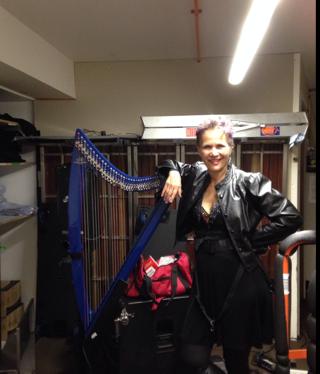 I will say that what it lacked in glamour it more than made up for in character and good company.

And many thanks to my harp-schleppers, Anna Dunwoodie (from New Zealand) and Emma Graham (from the UK) – I couldn’ta dun it witout yas!

Here are a couple of photos I downloaded from Facebook posts – thanks to the people who posted these!

This one thanks to Taras – after the show was over, he took a try at my cool signature model CAMAC “DHC Light” harp.  (Taras … you gotta lend me that monkey-hat for the New England winters!) 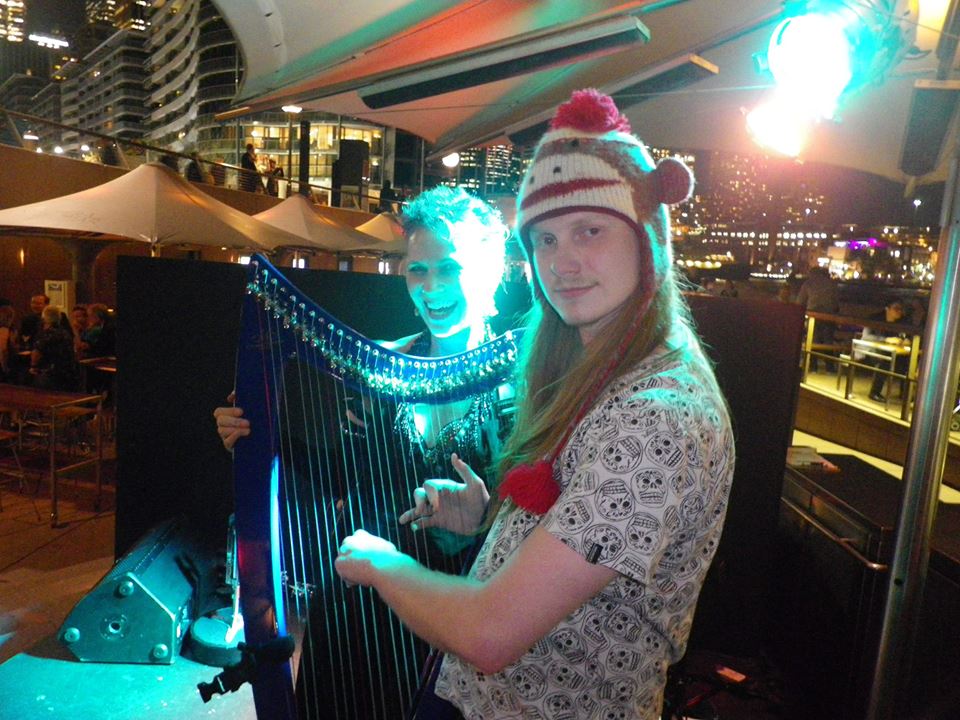 Jaymee Haefner‘s photo of the tiny (but just-the-right-size) stage during soundcheck … notice the water behind me. 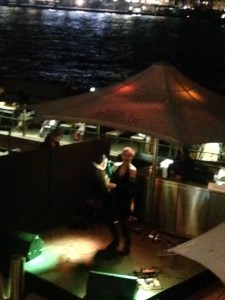 And here was the view from the stage, thanks again to Jaymee Haefner – now THAT’S a great stage view! 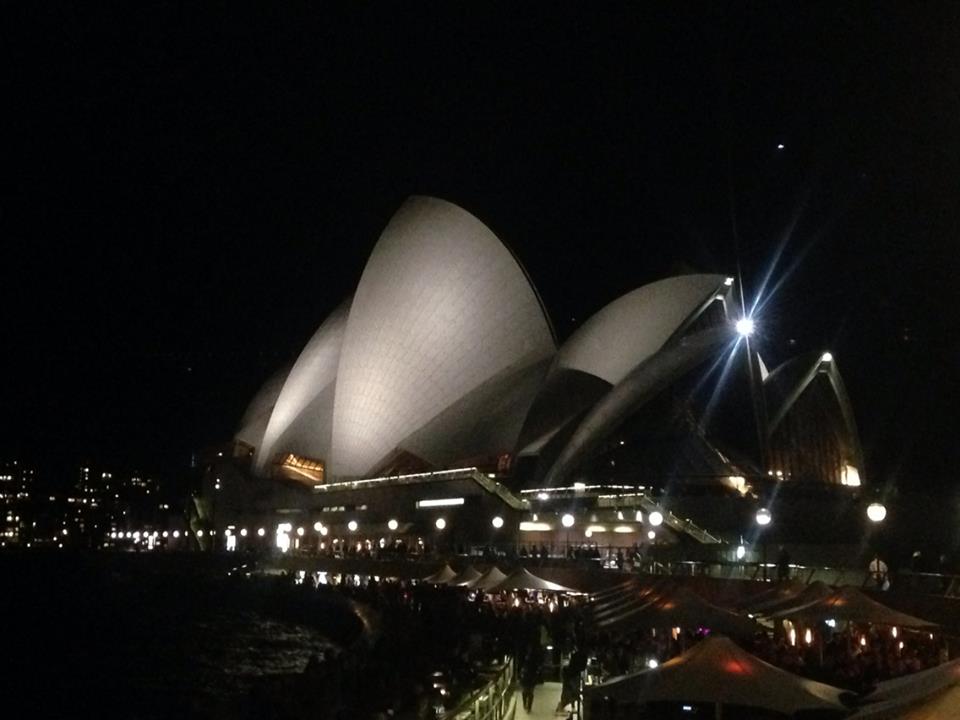 And finally, here are the actual wild Kangaroos I saw outside our bedroom window golfing up in the Australian wine country early the next morning, where we were visiting with friends.  I’m assuming they were golfing.  They were on a golf course. I believe their clubs are in the pouches. I didn’t want to get too close. I hear they box, too. 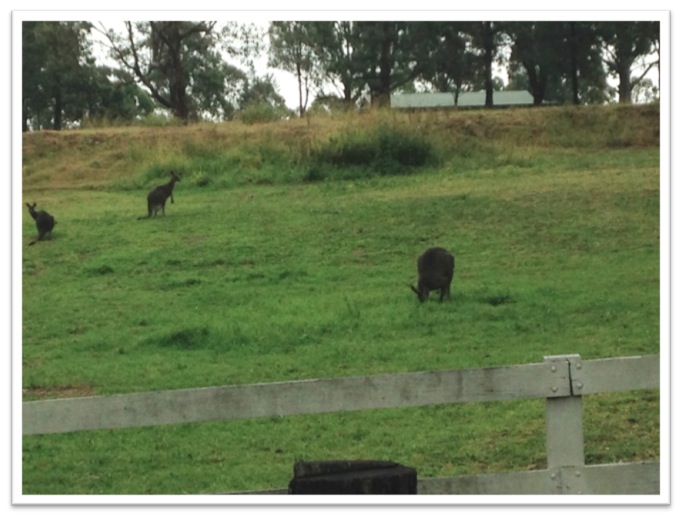