NOTE: This story includes an audio file related to the story – if you want to listen while you’re reading, here’s the song: 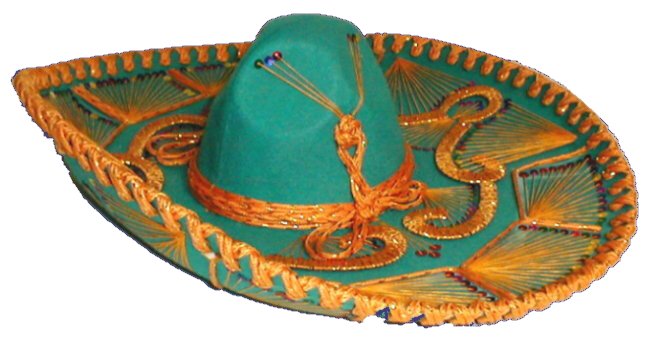 My parents were divorced when I was very young and my mother and I went to live with my Aunt.

Aftrer a year or so the three of us went to live with THEIR mother, my grandmother.  And there we were: three generations of  swinging bachelorettes under one roof, except my Grandmother wasn’t exactly a batchelorette,  according to my Grandfather.

A few years later my mother started dating again. Occasionally I got to go on the dates, sit on barstools and drink Shirley Temples, but mostly I stayed home.  It wasn’t so bad, she would always bring me presents after the dates:  little straw umbrellas, little plastic swords.  Fun stuff like that.

Then one day, she went on a date to Tijuana, Mexico. I was so excited I couldn’t sleep, thinking about what she’d bring back for me.  So, around midnight I heard the front door open and I ran down to meet her.  And there she was.  My mother, my own very mother, standing in the doorway, her arms around the world’s most incredibly handsome Mexican Hat.  This was a sombrero-and-a-half, red velvet weaving into golden straw, tassels and bells — it was the most daring, beautiful hat I had ever seen.  I ran to her and threw my arms around her knee and said  “Oh Thank you!  Thank you!  Thank you! I LOVE it!”

And my mother said.  “But darling, this hat isn’t for you.  This hat is mine.“

“Nooooooo!” I wailed, and I bugged her and I begged her until finally she said OK-OK-OK,  if I was very, very, VERY  good, then I could sleep with the hat  in my room.  But I was NEVER to touch it.

Fine. No touching. Understood.  But I had the hat!  On a peg on my wall.  My wall. For weeks I dreamt about Chihuahuas and Enchiladas.  I took Siestas every day, right after milk and cookitos.

Then one night, I couldn’t sleep. It was a few days before the full moon and the moonlight was streaming through the window.  I lay there awake just listening to the clock strike ten … eleven… twelve…  and on the first stroke of midnight, I began to hear something — faintly at first, but unmistakable. Music was coming from the Mexican hat.  Mariachi music.  Very soft and slow at first and then louder.  The hat began to glow and vibrate on the wall.  The music swelled. The hat wriggled off the nail,  slid down the wall and danced across the room two feet above the floor.  Wilder and wilder it danced, louder and louder the music.  Wilder and louder, and louder and wilder!  And then – bang! – suddenly the door burst open, the light flashed on and the hat froze and dropped to the floor.

It was my mother.

The next night, you can imagine, I lay awake waiting as the clock struck ten … eleven … twelve.  Once again, on the first stroke of midnight, the music began.  Slowly at first and then louder and louder.  The hat began to glow and vibrate – then wiggled off the nail and  onto the floor.

“Deborah Joyce… what are you doing on the floor … with the hat?”

The next night was the night of the full moon. I was lying in bed, my eyes as big as saucers.  I was waiting as the clock struck ten… eleven … twelve.

My mother was hiding outside the door.

Once again on the first stroke of midnight the faintest music began.

Slowly my mother opened the door. Slowly she slid into the room. Slowly, ever so slowly the music began to swell, and the hat began to glow and vibrate.  It wiggled and shimmied on the nail, spun a spiral on the wall.  My mother gasped, and there was sudden silence as the hat turned abruptly and looked up, straight into her face.

When that hat saw my mother, my beautiful young mother standing there in the moonlight, it shook itself in disbelief. In the most exquisite slow motion, it sailed off the wall and into her arms and kissed her right on the lips.  Slowly the music rose, thensoared and twirled, as that gorgeous sombrero drew her onto the floor and together they danced.  They danced the fandango, the quadrango, the heptasidroangle.  They danced a waltz, a foxtrot, a minuet, a paso dobles, right there in my room in the moonlight.

It was my grandmother.  There in the doorway.

But the hat didn’t care. The hat was in love with my mother.  It took her hands and kissed them tenderly.  “Mi Amor”, it said. “mi corazon,  mi vida!  Te amo, te quiro, te deseo!”  And with one last shimmer and a thrilling maraca crescendo, that hat flew out the window and off into the moonlight.

And that was the last we ever heard of my mother’s Mexican Hat.

Except … sometimes … when the moon is full, and the night leans towards midnight I hear faint music from my walls and, spinning across the floor, I see just the faintest shadow of the finest sombrero.

The recording above of “My Mother’s Mexican Hat” is from my 1991 GRP album “Talking Hands” with Chieli Minucci (guitar), George Jinda (percussion) and Dave Samuels (marimba)