Sarah and the Baroque Flamenco

This is a tiny story told through a series of Facebook chats. It started with a Christmas present and ended with a radio interview and an impassioned performance. I especially love the conclusion because it involves my composition “Baroque Flamenco.”

This is just one story about that piece and the power and passion one young artist has brought to it. 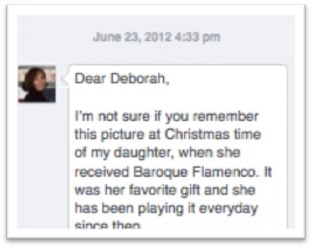 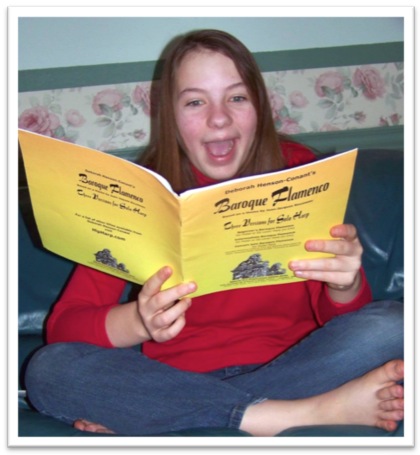 I’m not sure if you remember this picture at Christmas time of my daughter, when she received Baroque Flamenco. It was her favorite gift and she has been playing it everyday since then.

Her harp teacher recommended that she attend the Arizona Harp Experience. When she went, she felt intimidated being 13, and one of the youngest attending from a small town in Idaho.

She sat quietly through all the workshops until the first performance rehearsal, where she told me beforehand, “I don’t think I’m a very good harpist”. Then her love of Baroque Flamenco took over and, as Dr. McLaughlin put it she, “blew the socks off it”.

I know you must be very busy, but I am including a clip of her playing her it while she was there.

As I posted on Facebook, after she was done, Carroll McLaughlin called her a brilliant, rising star of the harp world, and if there were any student, she would accept privately out of the 16 that were there, it would be Sarah.

She then offered her a full scholarship to her harp program at the University of Arizona when it was time for her to go to college. She also said that she believed Sarah would go International, which I’m sure that you understand the meaning of better than we do.

Sarah has never been comfortable with sports, and was born with a speech impediment that was finally diagnosed and corrected a couple of years ago.

She has chosen to communicate with her music.

I just wanted to thank you not only for writing this wonderful piece, but for sharing it. It has made a big difference in one young harpist life. Oh and every other harpist that was there listening now wants a copy of it, just so you know….

[DHC Note … I was completely unaware of Facebook Chats until about a year ago, and once I discovered them I immediately forgot they existed … so I didn’t actually see the above message until a few months ago when Sally wrote to me again] 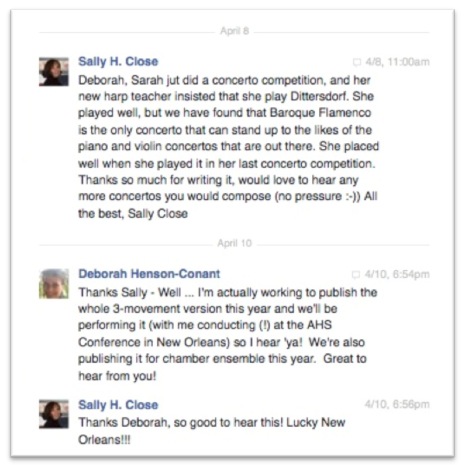 Sarah just did a concerto competition, and her new harp teacher insisted that she play Dittersdorf.*

She played well, but we have found that Baroque Flamenco is the only concerto that can stand up to the likes of the piano and violin concertos that are out there. She placed well when she played it in her last concerto competition.

Thanks so much for writing it, would love to hear any more concertos you would compose (no pressure :-))

[DHC Note to non-harpists: “Dittersdorf” is a well-known first-concerto for harp players.  It’s the first one I learned and performed – and it’s one of the reasons I was so determined to create concertos that show the harp as the passionate, powerful and hugely expressive instrument it can be. So thank you Karl Ditters von Dittersdorf!]

Thanks Sally – Well … I’m actually working to publish the whole 3-movement version this year and we’ll be performing it (with me conducting (!) at the AHS Conference in New Orleans) so I hear ‘ya!

We’re also publishing it for chamber ensemble this year. Great to hear from you!

Thanks Deborah, so good to hear this! Lucky New Orleans!!!

When Sarah was invited to be 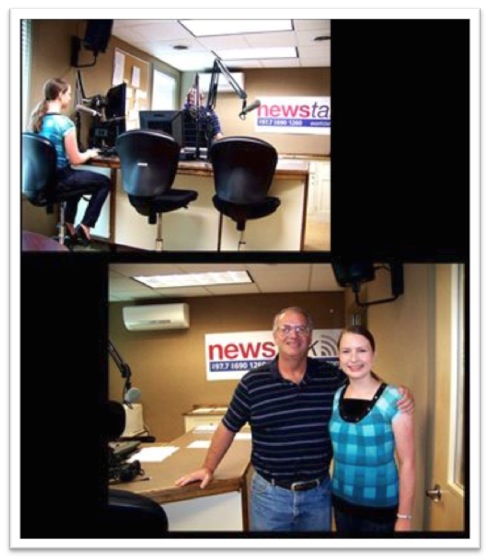 interviewed yesterday by a radio station, they requested sound clips of her harp playing, so we went to great effort to convert clips to MP3 of her playing Samuel Pratt’s “Little Fountain” and Eleanor Fell’s “American in Paris/Rhapsody in Blue” as they seemed to have the best sound quality.

I also sent the video clip of her performing Baroque Flamenco at the Sun Valley Pavilion, just so they could see who they would be interviewing.

What Carrol McLaughlin said after she heard her play it was right – it’s a showstopper! Hope this brought a smile to your day as it did ours! 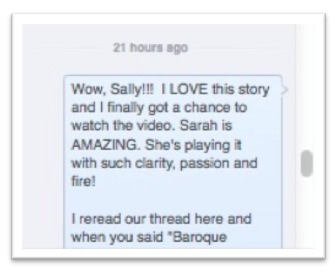 I LOVE this story and I finally got a chance to watch the video.

Sarah is AMAZING. She’s playing it with such clarity, passion and fire!

I reread our thread here and when you said “Baroque Flamenco is the only concerto that can stand up to the likes of the piano and violin concertos that are out there” I wanted to stand up and cheer — because THAT’S why I wrote it! So we harpists would have the chance to reach audiences with the same impact that violinists and pianists (and cellists) (and probably trumpet players) get to!

1. Have Sarah look at this performance from New Orleans so she can see the whole concerto (3 movements). We should talk about finding a way for her to perform it in 2015 or 2016 – either with orchestra or chamber ensemble

2. Are you OK with me posting this string of emails – including the photo & a link to the video – as a blog?

Oops .. also forgot the link to the video: Baroque Flamenco is the final movement – So Sarah can see how it fits with the other movements 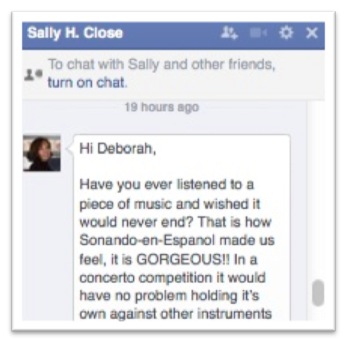 Have you ever listened to a piece of music and wished it would never end?

That is how Sonando-en-Espanol made us feel, it is GORGEOUS!!

In a concerto competition it would have no problem holding it’s own against other instruments (even the trumpet).

Sarah says it is her dream concerto and would love to talk about performing it with an orchestra.

She has played for several different orchestras and conductors (20 in the last 3 years), but so enjoyed watching you conducting in the video.

Please feel free to post this string of E-mails at any time, I know that others will feel the same way we do about this piece.
Thank you, thank you for writing it!!

All the best, Sally

I love this story.  I love knowing that this piece has become part of the voice of a new artist.  And I love the fire and flare and passion Sarah plays with.

If you play the harp – join my upcoming “Baroque Flamenco Bootcamp.” I want you to have the experience of playing this piece, too –  on lever or pedal harp – because it’s an incredible, empowering, and fun experience.  And that’s why I wrote it and why I created this course.

Thank you Sarah – for YOUR passion — and Sally, for sharing the story with me!